CLEVELAND -- The shortest month of the year ended up being the Cleveland Cavaliers’ most successful one of the season thus far, as they closed out February with a 102-95 win over the Milwaukee Bucks on Monday.

The win put the Cavs at 9-2 in those 28 days. Naturally, it left them hoping that the month -- in which they won 81.8 percent of their games (better than their 76.7 percent in November and 75 percent in December) -- would keep on going.

“It’s over?” LeBron James said after coming back from strep throat to put up 24 points on 8-for-12 shooting, 10 rebounds and six assists on the Bucks. “February is over, huh? Yeah, that sucks. It’s been a great month for our team. We just played good basketball. We got back to Cavalier basketball and to our DNA, so it definitely helped a lot.”

Talk about a turnaround coming off a January in which the team went just 7-8, capped off by James putting the organization on blast for its roster construction and commitment to winning.

Remember that? It was when James stated, bluntly, “We're not better than last year, from a personnel standpoint."

Does that still ring true after Monday, when the team acquired its third significant piece in 2017 in Deron Williams, a three-time All-Star? Williams joins a one-time All-Star acquisition in Kyle Korver and a former No. 2 pick in Derrick Williams.

Here’s whom the Cavs lost from last season’s championship team: Matthew Dellavedova, Timofey Mozgov, Mo Williams, Dahntay Jones and Sasha Kaun. Fast-forward eight months from the NBA Finals, and Mo Williams, Jones and Kaun are all out of the league, while Mozgov has collected DNP-CDs in six of the Los Angeles Lakers’ past seven games. And with all due respect to Dellavedova, who is having a serviceable season for the Bucks, let’s not forget he played five minutes total in Games 5, 6 and 7 of the Finals, when the Cavs were in must-win mode.

Does James' criticism still ring true with a fourth piece potentially on the way, after Andrew Bogut was waived by the Philadelphia 76ers on Monday?

Korver, with 13 points off the bench on Monday, and Derrick Williams, with 14 points on 5-for-7 shooting (including a deep-as-Freud buzzer-beating 3-pointer to end the third quarter) and seven rebounds in a reserve role, have transformed Cleveland’s second unit.

Then there is Deron Williams, who provides a clear upgrade to Delly (not to mention DeAndre Liggins and Kay Felder too).

“I can definitely help the pick-and-roll game here, being able to distribute and also score as well and kind of take the pressure off Bron having to handle the ball so much with that second unit,” Deron Williams said before receiving a hearty ovation from the Cleveland crowd when he was shown on the video board in the second half.

While all of these replacement parts were flocking to the Cavs the way Iron Man summons his armor to fly onto his body, Cleveland has had two starters on the mend who are both expected back on the court next month: Kevin Love and J.R. Smith. 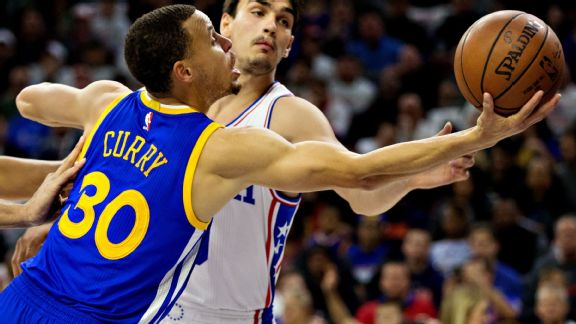 Even when Stephen Curry ties a mark for 3-point futility, the Warriors win.

“We’ve been short-handed for a while, but now we’re starting to get healthy a little bit,” James said. “J.R.’s not too far out, Kev is looking better and better every day, so now we add D-Will; it’s going to help us out a lot.”

It’s all coming together for a true test before the playoffs begin: a 17-game March, with 12 of those contests on the road, including four back-to-backs and trips to Boston, Atlanta, Houston, the Los Angeles Clippers and San Antonio.

“The main thing that I’ve said from the beginning is our process and our health,” said James, when asked about the month ahead. “If we can get healthy at the right time, get some games under our belt, it’s going to help us in the postseason. But right now, we’re in a good rhythm, and we just want to continue that.”