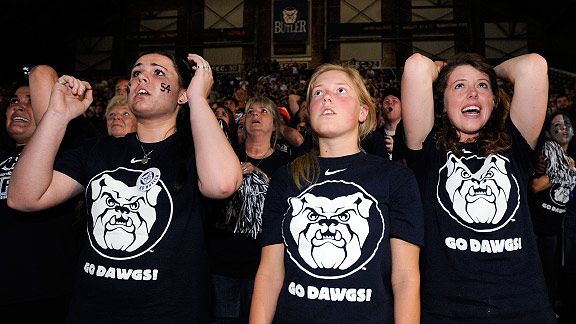 At a viewing party at Butler's Hinkle Fieldhouse, students Emily Vogt, Samantha Christie and Colleen Gallagher, from left, watch the final moments of Butler's 61-59 loss to Duke in the title game.

INDIANAPOLIS -- In "Hoosiers," Jimmy Chitwood made the winning shot at the buzzer, lifting fictitious Hickory High School to an improbable Indiana state championship.

Butler star Gordon Hayward's half-court heave didn't go in at the end of Monday night's 61-59 loss to Duke in the NCAA tournament championship game at Lucas Oil Stadium. But his shot came so close to falling through the net that thousands of Bulldogs fans might have blown the roof off Hinkle Fieldhouse on the Butler campus.

Hinkle was the set for Chitwood's make-believe shot in "Hoosiers," and it's the home gym of Hayward, who came within about a half-inch of making the biggest shot in college basketball history.

If Hayward's shot had fallen through the net, kids around the country would be shouting "Butler," instead of "Hickory," every time they walked into a gym.

"I definitely thought it was going in," said Butler fan Josh Hartke of Fort Wayne, Ind. "It looked good the whole way."

When Hayward's half-court shot bounced off the rim, a crowd of about 8,000 fans which gathered here to watch the game on four large projection TVs, let out a collective groan of agony. But only a few seconds later, the fans gave the Bulldogs a much-deserved standing ovation.

The underdog team from the school of 4,200 students, which sits near the Broad Ripple Village section of Indianapolis, nearly pulled off one of the most improbable victories in NCAA tournament history on Monday night.

And that was definitely something worth cheering for.

Somewhere in this historic building, someone pushed a button to play Queen's iconic song, "We Are The Champions" as soon as the game ended.

The Butler fans sang along for several minutes, and they weren't singing about the Blue Devils, who won their fourth national championship.

"It was a great game," Hartke said. "When you thought they were down and out, they came right back."

Butler didn't look pretty for most of the second half, going nearly eight minutes without making a field goal, but it never stopped the Bulldogs fans here from believing their team would win. Even after the Bulldogs fell behind 60-55 with 3:16 to go, the crowd loudly chanted, "Defense! Defense!"

And after Butler junior Matt Howard scored two layups to cut Duke's lead to 60-59 with 55 seconds left, there wasn't a rear in a seat in the building. When the ball bounced out of bounds off Duke center's Brian Zoubek's foot with about 13 seconds to play, the place went delirious.

After a couple of timeouts, Hayward took the ball near the top of the key, dribbled behind his back and drove toward the baseline. But Hayward's shot was too strong, and Zoubek grabbed the rebound and was fouled. Zoubek intentionally missed the second foul shot, setting up Hayward's last-second heave.

The Bulldogs might have lost the game, but their fans believe they won much more during their improbable run to the Final Four. Butler became the first team since UCLA in 1972 to play in the Final Four in its hometown.

"It's been amazing, especially for the Butler community," said Hartke, whose wife, Anne, graduated from the school. "It's brought school spirit up beyond what it was before."

Matt Armwood, a pharmacy student from Land O' Lakes, Fla., wasn't happy with the final score, but he was pretty proud of the team representing his school.

"It was close," Armwood said. "The last month has been pretty exciting. Everyone has been totally blue."

John Thompson, a Butler fan from Southport, Ind., was confident the Bulldogs would be back in the Final Four soon.