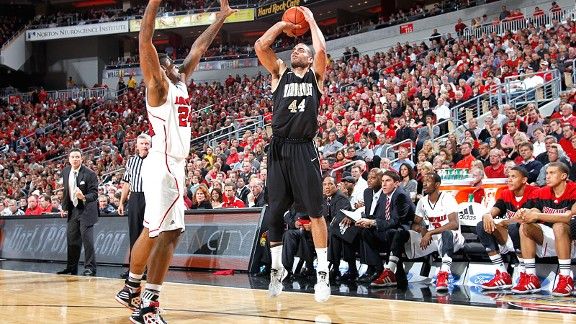 Jeffery Taylor and Vanderbilt have what it takes to upset No. 1 Kentucky on Saturday.

College GameDay takes center stage in Nashville this weekend, where the Vanderbilt Commodores look to upset the top-ranked Kentucky Wildcats.

Vanderbilt's offense has carried the team during its 6-3 SEC run. The Commodores lead the league in effective field goal percentage in conference play.

They’ll face a huge challenge Saturday against the Wildcats, who are unbeaten in SEC play, bring the conference’s best defense into the contest and lead the nation in margin of victory.

In this strength-versus-strength matchup, let's take a look at how Vanderbilt might be able to pull off the upset.

One of the biggest challenges for Vanderbilt will be to avoid the shot-blocking efforts of Kentucky's Anthony Davis. Vanderbilt has options to combat that.

One is via the 3-point shot. The Commodores' league-leading attack has been fueled by its prolific long-distance shooting. Vanderbilt ranks first in 3-point accuracy during SEC games and has shot better than 40 percent from 3-point range in more than half of its conference games.

Kentucky ranks third during conference play in 3-point field goal defense. However, the Wildcats did see the league's worst long-distance shooting team, Alabama, go 5-of-7 from beyond the arc on Jan. 21.

Kentucky has also held its SEC opponents to a league-best 0.91 points per possession, according to Statsheet.com.

The Wildcats block a Division I-best 22 percent of their opponents' 2-point attempts, led by a 15 percent mark from Anthony Davis, which ranks third in the country.

But Kentucky has been vulnerable during league play when defending players coming off screens.

League opponents have averaged 1.14 points per play on screens, the worst mark Kentucky has allowed on any play type in SEC games.

Conference foes have made 44 percent of their shots from the floor, including more than half from beyond the arc when coming off screens.

On Shots Off Screens, SEC Ranks

Vanderbilt has the perimeter shooters to take advantage of this weakness. Jeffery Taylor is averaging 1.36 points per play and shooting 55 percent coming off screens this season, both of which rank second in the conference, and John Jenkins also averages better than one point per play off screens.

The Commodores have connected on 50 percent of their 3-pointers and 45 percent of all shots off screens in conference games, and have turned the ball over just once on 46 plays.

In its 15-point win over LSU this week, Vanderbilt was 5-of-11 on shots coming off a screen, including 3-of-6 from long distance.

The Wildcats own the league's second-best offense on spot up plays, averaging better than a point per play. Doron Lamb and Darius Miller have torched opposing defenses all season, making a combined 48 percent of their spot-up attempts.

Vanderbilt struggled to defend spot-up play during its nonconference slate but has really improved against SEC teams (see chart on right).

After allowing six of its 15 nonconference opponents to average more than one point per spot-up play, Vanderbilt has done that just once in nine conference games.

Taylor has been the Commodores' best spot-up defender this season. Opponents have made just a quarter of their spot-up shots against Taylor, the fifth-lowest shooting percentage against an individual defender in the SEC.