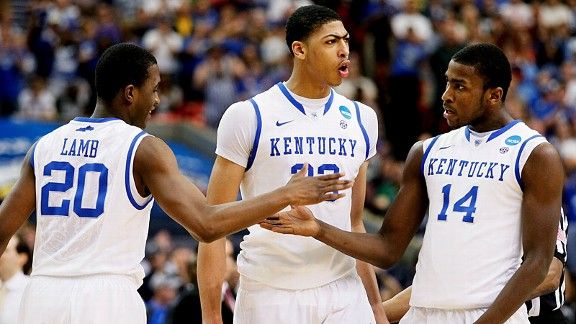 Anthony Davis and his Kentucky teammates have a chance to make history at the 2012 NBA Draft.Trivia question: Anthony Davis will become the second player in the common draft era (since 1966) to be drafted first overall the same season as winning a national championship and being the AP Player of the Year. Name the other.

Here are a 10 more facts to impress your friends with as we get ready for draft night.

Did you know that…

• Davis averaged 14.2 points per game at Kentucky. In the common draft era, the fewest points per game by any No. 1 pick who played in college the previous season was 14.5 by Georgetown’s Patrick Ewing in 1984-85.

• Kentucky will be the ninth school to have more than one former player taken first overall. The two years between top overall picks (also in 2010) is the fewest among those nine schools.

• Kentucky and North Carolina could have a combined 10 players drafted. There has never been a draft in the common draft era in which two schools each had at least four picks in the first two rounds, according to the Elias Sports Bureau.

• Since Derrick Rose went No. 1 in 2008, John Calipari has coached seven first-round picks. Bill Self and Rick Barnes are tied for the second-most over that span with six.

• Speaking of lottery picks, UNC could have four of them. The earliest in the common draft era a school has had four players selected is 14th (Duke in 1999, UNC in 2005).

• With the lack of elite international prospects this year, it could mark the first time since 1994 that every first-round pick came from the college ranks.

• If Davis, Kidd-Gilchrist and Bradley Beal are selected in the Top 3, it will be the second time a conference has had the top 3 picks. In 1986, the ACC pulled it off with the selection of UNC’s Brad Daugherty, Maryland’s Len Bias and NC State’s Chris Washburn.

• If Thomas Robinson goes second, it would be the first draft in NBA history in which each of the top two picks played against each other in the preceding national championship game, according to Elias.

• Weber State's Damian Lillard is projected to go in the Top 10 of many mock drafts. The only Big Sky player ever chosen in the top 10? Montana’s Michael Ray Richardson in 1978.

Get the information you need to be ready for the draft and follow the action Thursday night on Twitter @ESPNStatsInfo.