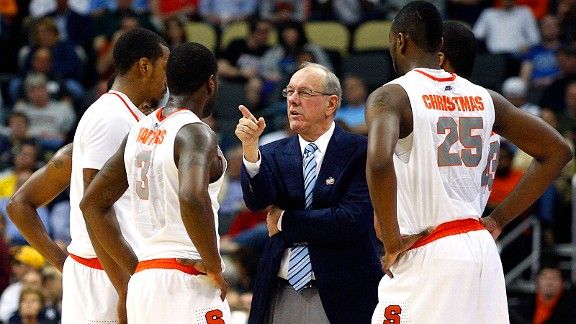 Jim Boeheim's teams have made the NCAA tournament a record 29 times.Jim Boeheim goes for career win No. 900 tonight when No. 3 Syracuse hosts Detroit (7 ET on ESPN2). Mike Krzyzewski (936) and Bob Knight (902) are the only Division I coaches to achieve that milestone.

Boeheim already holds Division I records for most wins at one school (previously Dean Smith’s 879 at UNC) and wins at one’s alma mater (previously Norm Stewart’s 634 at Missouri). Herb Magee, who has 948 wins at Division III Philadelphia University (his alma mater) is atop the NCAA list in both categories.

Most Wins by D-I Men’s Head Coach, Entire Career at One School

• Boeheim’s 37 seasons at Syracuse are the most of any Division I coach at his current school (Dave Bike has been at Sacred Heart for 35 years).

• His 29 NCAA tournament appearances are the most all time.

• His current streak of 15 consecutive 20-win seasons puts him just one behind Krzyzewski.

• His win over Wisconsin in last season’s Sweet 16 gave him 48 career NCAA tournament wins, breaking a tie with John Wooden for fifth most all time (Jim Calhoun is fourth with 49).

• He’s one of 11 coaches to win the men’s basketball championship at his alma mater.

• His 402 Big East wins (regular season and tournament) and 47 Big East tournament wins are the most all time.