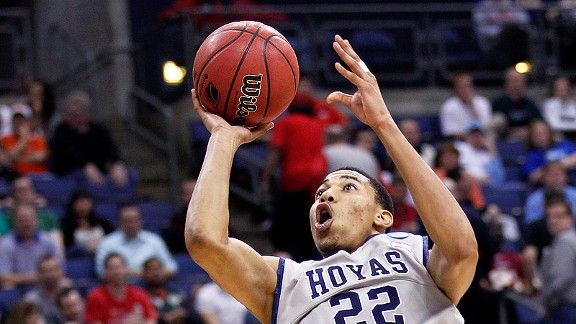 Otto Porter has emerged as a dark-horse contender for the Wooden Award.

As March approaches, the field of Wooden Award contenders continues to narrow.

Trey Burke is the point guard. Doug McDermott is the scorer. Mason Plumlee is the big man.

But Victor Oladipo’s emergence has put the focus on a new type of Wooden Award candidate: the do-everything player.

Oladipo has emerged as Indiana’s most efficient scoring threat and best defender. On a team with another All-American candidate (Cody Zeller) and two other 1,000-point scorers (Christian Watford and Jordan Hulls), Oladipo has turned a complementary role into an elite one.

But what if you are the do-everything player on a team without much else?

Six weeks ago, Georgetown appeared to be on the verge of implosion. It suffered back-to-back losses without reaching 50 points. Then, the Hoyas suspended arguably their second-best player in Greg Whittington (academics).

Since then, Georgetown is 10-1 with Porter carrying the team on his back. He’s averaging 17.6 points and 8.2 rebounds per game over that stretch in a starting lineup where Markel Starks is the only other player averaging more than eight points per game.

Porter is one of college basketball’s most prolific stat-sheet stuffers. He ranks in the top 30 in the Big East in scoring, rebounds, assists, steals, blocks and 3-pointers.

Statistically, his season bears a striking resemblance to Syracuse’s Wes Johnson in 2009-10, a fitting comparison with the Hoyas travelling to the Carrier Dome on Saturday. Both averaged at least 15 PPG, 7 RPG, 2 APG, 1 SPG and 1 BPG while hitting half of their shots.

Over the past 25 years, the only other high-level players to do that were Tom Gugliotta for NC State in 1991 and Danny Granger for New Mexico in 2005.

Johnson finished third in the 2010 Wooden vote behind Evan Turner and John Wall. So why isn’t Porter deeper into this season’s discussion?

Ironically for a stat-sheet stuffer, numbers might not do him justice because defense is such a big part of his impact. Porter ranks 20th in the nation in defensive rating. Among Wooden candidates, only Jeff Withey (14th) is ahead of him.

As Georgetown keeps winning Porter will gain more notice, and that’s what it will take for him to enter the Wooden conversation.

Only four Wooden Award winners have averaged fewer than 18 PPG (Anthony Davis, T.J. Ford, Elton Brand and Ralph Sampson). All were on top-five teams. For Oladipo, Plumlee and even Porter, it all comes down to how their respective teams finish out the season.