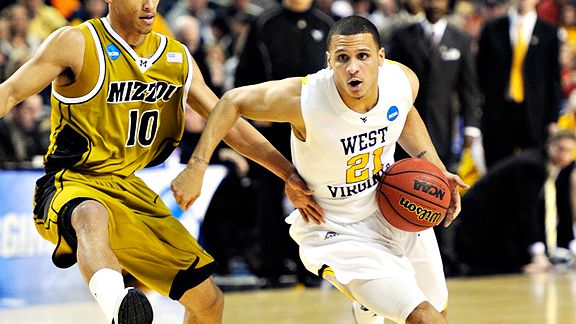 WVU's Joe Mazzulla led the Mountaineers to a second-round win over Missouri. BUFFALO, N.Y. -- The lowest point wasn’t after he suffered the injury that some suspected could end his collegiate career.

It wasn’t when he turned himself into police after being charged with domestic violence.

It wasn’t when he was indefinitely suspended from the West Virginia basketball team.

For Joe Mazzulla, the lowest point was much subtler.

“I started to really shut out the people around me,’’ the WVU point guard said. “I didn’t want them in my life because I was so embarrassed. If they had given up on me, I don’t know what would have happened. I know I wouldn’t be here.’’

The much-maligned tandem of Mazzulla and Darryl ‘Truck’ Bryant ground Missouri’s fastest 40 minutes of basketball to a halt, limiting the turnovers and controlling the tempo to lift WVU to a 68-59 win.

In the celebratory locker room, Mazzula sat amid a room of guys who buoyed their teammate along through his rough patches. There was also a coach, admittedly flawed himself, who challenged Mazzulla to get stronger.

“All we’ve been hearing about all year is how West Virginia doesn’t have any point guards,’’ Bryant said. “All I can say is we’re winning, we’re No. 6 in the country, the No. 2 seed and we’re in the Sweet 16. We can’t be that bad.’’

Challenged by Bob Huggins to stand in the face of the Tigers’ pressure, the two players considered the weakest link on the Mountaineers' roster combined to commit only three turnovers, part of a tiny 10-turnover afternoon for West Virginia.

That marks the fewest mistakes a team has made against Mizzou this season and continues an obvious trend: When the Tigers don’t draw turnovers, they don’t win. WVU, Nebraska (twice) and Baylor all made 13 or fewer mistakes against Missouri. The Tigers were 1-3 in those games.

The Tigers tried frantically to speed the game up, amping their pressure in the final seven minutes and cutting the lead to 56-53.

But they could never entirely take West Virginia out of its game. The Mountaineers inbounded the ball to Da’Sean Butler, who handled the initial trap and then passed to Mazzulla or Bryant to start the offense.

“We talk about his 29 points, but he’s the guy who really handled the double-team for us,’’ Bob Huggins said of Butler. “And then Truck and Joe both did a good job advancing the ball.’’

To earn their coach’s high praise, both Mazzulla and Bryant had to take a twisted path. Mazzulla’s wounds were both bad luck and bad behavior. He fractured the growth plate in his right shoulder in early December of last season. After learning that surgery only had a 50-50 success rate, decided to hold off on the repair and try to play through it, but within two weeks, he elected to take a medical redshirt.

“By far one of the toughest people we have on this team,’’ Butler said. “He’s played with one arm the majority of the year. He hasn’t complained about it or cried or anything.’’

A month after the season ended, Mazzulla was charged with a domestic attack outside of a club in Morgantown. It was Mazzulla’s second strike. A year earlier, he and teammate Cam Thoroughman were charged at a Pittsburgh Pirates game for getting in a scuffle with a police office and for underage drinking.

“Now that I’m on the other side I can say it; I don’t think you can become a man or a woman without making mistakes,’’ Mazzulla said. “I regret what I did but I don’t regret learning from my mistakes.’’

Bryant’s challenges were far less overwhelming, but no less trying.

A prolific scorer out of St. Raymond’s High School in the Bronx, he has logged plenty of minutes in Huggins’ doghouse.

Forced to shoulder much of the point guard duties while Mazzulla recovered, he struggled with scoring while also distributing the basketball and Huggins let him know it. Often.

“He has a way of getting his point across -- in practice, on the court, when you’re sleeping, whenever,’’ Bryant said. “It took me a long time to get used to it. I talked to Nick Van Exel a lot. He told me I had to learn to let it go in one ear and out the other, but it was hard. There are still times I find myself getting caught up in what he’s saying instead of why he’s saying it.’’

What Huggins said before the Mizzou game, Mazzulla and Bryant agreed couldn’t be printed. But compared to the pressure their coach put on them, the Mizzou pressure defense was a walk in the park.

“Everyone sees him on television, where he’s yelling 90 percent of the time and coaching 10 percent; in practice it can be completely the opposite but he always has a way of motivating you,’’ Mazzulla said. “He’ll just throw out little innuendos -- ‘You can’t do this,’ whatever -- during practice. He’s really good at getting the most out of you.’’

And in return, Mazzulla is getting the most out of his second chance.