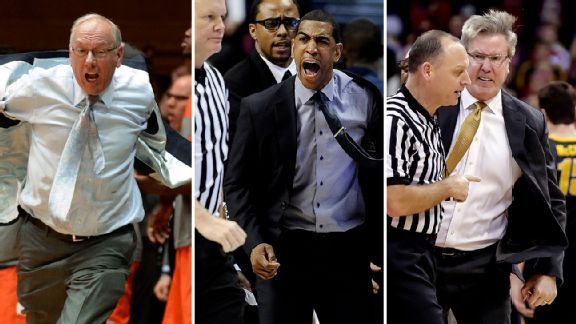 Coaches didn't always agree with referees interpreting block-charge calls differently.Much was made this past off-season about the focus to increase scoring in college basketball.

Referees were instructed to interpret block-charge calls differently, while cracking down on defensive hand-checking. The theory went that this would help increase scoring after a season that saw the lowest nation-wide scoring average since 1981-82.

So how did it work out?

Scoring up, possessions down

Scoring increased by more than five percent this season compared to last, despite the fact that teams averaged about one fewer possession per game.

One of the reasons for the rise in scoring could be the increased trips to the charity stripe.

The NCAA Tournament was a bit different, however. Scoring during the tournament was down by more than six percent compared to November and December of this season.

During the tournament, teams averaged 3.5 fewer free throw attempts per game than during the first two months of the season.

But when comparing this season's NCAA Tournament to last year, the trend was consistent with the regular season.

Scoring during the tournament this season was up nearly four percent compared to last season. Again, this occurred despite the fact that teams averaged more than two fewer possessions per game.