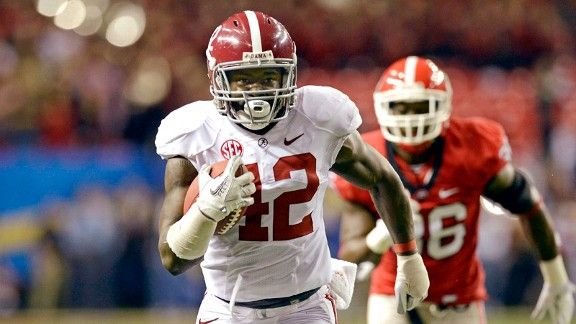 The Tide got it done on the ground. They ran for 350 rushing yards, the most in SEC championship game history.

Eddie Lacy and T.J. Yeldon became the first teammates to each run for 100 yards in SEC championship game history. Lacy’s 181 rushing yards are the third-most in the history of the SEC title game.

The Tide were committed to the run, as they ran the ball 51 times, two shy of the SEC championship game record of 53.

Two tight ends, too much

Alabama ran 36 times for a season-high 298 yards with two or more tight ends in the formation. The Tide ran out of this personnel package on 26 of their 34 second-half plays, gaining 199 yards and two touchdowns. Alabama averaged a season-high 5.5 yards before contact out of this formation.

AJ McCarron completed 8 of 9 passes for 114 yards and a touchdown with two or more tight ends in the formation.

Getting it done inside the tackles

Alabama outrushed Georgia 304-72 inside the tackles. The Tide averaged 8.0 yards per carry on such runs, including a season-high 13 that gained 10 yards or more. Lacy (172) and Yeldon (125) led the way for Alabama, with both running backs gaining over 100 yards inside the tackles for the second time this season. They also did it against Missouri.

McCarron completed 5 of 7 passes off play action for 116 yards and a touchdown. McCarron has 11 touchdown passes off a run fake this season, six more than he had all of last season. Eight of the 11 touchdowns have been on passes thrown 20 yards or longer, including Cooper’s 45-yard touchdown against Georgia.

Georgia’s defense allowed a season-high 512 total yards, just the second time the Bulldogs allowed 500 yards in the past seven seasons. For the first time since at least 2000, they’ve allowed 300 rushing yards in three straight games.