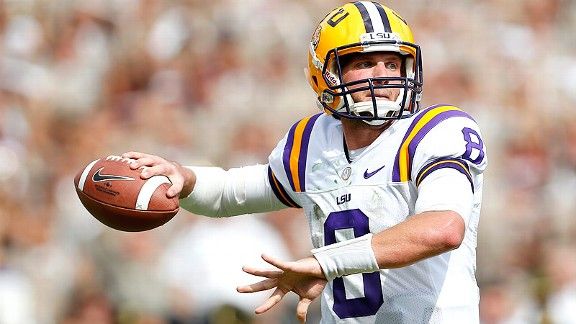 When Zach Mettenberger was named the starting quarterback early in the offseason, LSU fans were hopeful that he would be able to improve a passing game that finished 10th in the SEC in passing in 2011.

However, for most of this season, that hasn’t been the case. While in his first eight games, Mettenberger averaged slightly more yards per game (177.4), he also had more turnovers (7) than Jordan Jefferson and Jarrett Lee had combined last season (6).

Despite those struggles, in the biggest game of his young career last Saturday against Alabama, Mettenberger rose to the occasion.

After completing just 46.2 percent of his passes in his first four SEC games, Mettenberger completed 24 of 35 passes (68.6 percent) for a career-high 298 yards.

He was especially strong in the second half, going 14-of-17 for 206 yards. It had been 31 games since the last time a quarterback threw for 200 yards in a half against Alabama's defense.

The question going forward is whether Mettenberger’s play in the second half is a trend or a fluke. His play on third downs and against the blitz bodes well for future success.

On third downs, Mettenberger converted eight first downs through the air, tying the most allowed by Alabama in the Nick Saban era. Last season, in two meetings, LSU did not convert a single third down through the air against the Crimson Tide, throwing for more interceptions (1) than yards (0).

Zach Mettenberger on 3rd Down

Mettenberger also showed marked improvement against the blitz, particularly in the fourth quarter. Mettenberger was 7-of-8 for 118 yards and a touchdown in the fourth quarter against Alabama when the Tide sent at least five pass-rushers. That’s more yards than either he had or Alabama had allowed in those situations in a full game until then. Mettenberger also completed three passes of at least 20 yards against the blitz, one more than he had in his previous four SEC games combined.

While Mettenberger comes in after the best half of his career, this week’s opponent has struggled defensively the last two weeks. Mississippi State has allowed opposing quarterbacks to complete 77.8 percent of passes the last two weeks without an interception (both losses). During its 7-0 start, Mississippi State intercepted 12 passes, so Saturday’s game is a good litmus test to see if Mettenberger truly has turned the corner.