As he was growing up in Riggins, Idaho, the Seattle Seahawks were the closest team, 11 hours away. Seattle linebacker Bobby Wagner was his favorite player, but he never got to see him anywhere but on television.

On Thursday, Vander Esch will be able to see his first NFL game. Oh, and he’ll play in it, too, when the Dallas Cowboys take on the San Francisco 49ers at Levi’s Stadium.

“I think it’s going to be an absolute blast and I can’t wait for it,” the first-round pick said. “Knowing that my first NFL game is going to be one I’m actually playing in, that’s pretty neat. I’m ready to go and just get after it.”

The starters are not expected to play much in the preseason debut. So far in training camp, Vander Esch has served as the backup middle linebacker to Jaylon Smith. The Cowboys want Vander Esch to learn that spot, calling the defense to gain a fuller understanding of the whole scheme before they start moving him around.

The last time Vander Esch played in a game he had 12 tackles, a forced fumble and a sack in Boise State’s Las Vegas Bowl win against Oregon. It was the game that convinced him to enter the NFL draft a year early even if he had started just one full season in college.

From small-town America to America's team 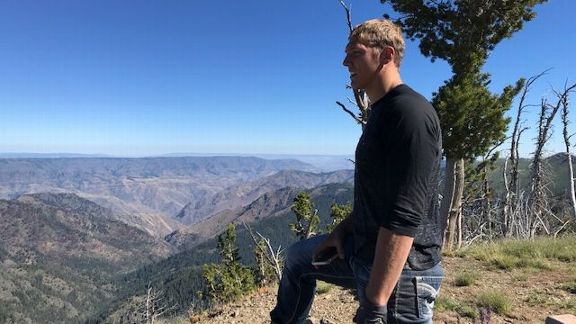 Leighton Vander Esch grew up in Riggins, Idaho, a small town with a passion for the outdoors. Join Todd Archer and Vander Esch for a visit to Riggins, where the Cowboys' first-round pick was an 8-on-8 football legend. Read.

“Before halftime I looked at one of the coaches in the box and I said, ‘This is a wrap,’” Boise State defensive coordinator Andy Avalos said. “I wasn’t talking about the game. He made so many plays. It was one of the coolest things to see. We were doing well that game, but the guy was having such an impact on the game.”

It was just the 32nd game of 11-on-11 football Vander Esch played in his life. Ever. Thursday will be the 33rd. Growing up in Riggins, he played eight-man football at Salmon River High School. On offense, he played quarterback. On defense, he played a hybrid safety/linebacker role.

When he got to Boise, some teammates playfully mentioned his eight-man background.

“Plenty of guys joked that he looked around and wondered why there were so many people standing next to him on the field,” Avalos said. “He adapted so fast those jokes went away quick.”

Vander Esch has taken some time getting adjusted to what the Cowboys are asking him to do, but in his past two practices he made eye-opening plays for a 6-foot-4, 255-pound linebacker.

On Sunday, there was a swing pass to the flat to Rod Smith where Vander Esch sprinted to his left to hold the play to a short gain. On Monday, he darted through the line to beat Smith to the edge for a tackle for loss.

“We saw some flashes of some things we saw on tape in college where he’s sideline to sideline,” head coach Jason Garrett said. “He’s around the ball. He’s playing instinctively and he’s certainly taking advantage of the opportunities.”

As he works into training camp practices, Sean Lee has become a mentor of sorts to Vander Esch. The veteran linebacker is in his ear constantly. When Vander Esch talks, he sounds like Lee, repeating some of the same phrases and showing a similar competitiveness.

“I feel like I couldn’t have it better than with him,” Vander Esch said. “He always has me on point and running me through stuff and quizzing me ... I mean we’ll be walking around the field and watching and if you’re not in necessarily he’ll be like, ‘What do you have here?’ So you’ve got to know the play. You’ve got to get your mental reps. Your mental reps are as important as your physical reps.”

After wondering what it would be like for so long, Vander Esch will get the opportunity Thursday he dreamed of when playing at Salmon River not that long ago. He said he wants to be “calm, cool and collected,” but he knows that will be difficult even if it is just a preseason game.

“There’s always going to be expectations in the position I’m in [as a first-round pick],” he said, “but you’ve got to put that to the side and do what you do. Just be yourself and work, gain the respect of others and show them that you care and you’re going to give it your all.”