FRISCO, Texas -- It’s a few hours before the Dallas Cowboys play the Philadelphia Eagles, and the group in Lot 15, a few blocks from AT&T Stadium, is tailgating like everybody else.

They’re eating grilled chicken, pulled pork or steak. They have all sorts of chips and dips. There are cookies and leftover Halloween candy. There’s beer and other drinks, too. They’ve come from Washington, Michigan, Montana and Idaho.

As the group discusses anything and everything, strangers walk past, doing double-takes at the bus that the group has called its football home this Sunday.

Down the side of the bus in blue with a silver outline reads “55 Leighton Vander Esch.” There’s a Boise State logo with Vander Esch’s No. 38, too. On the windows are pictures of Vander Esch with NFL commissioner Roger Goodell moments after he was the Cowboys’ first-round pick in April, and a picture of him leading Boise State out onto the field.

Earlier in the season, Vander Esch’s family and some friends made the seven-hour drive from Riggins, Idaho, to Seattle in the bus. By the middle of the season, the bus had a spot outside AT&T Stadium for home games.

A (rapid) hometown trip with Leighton 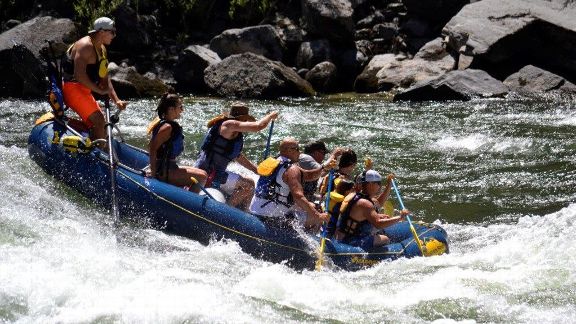 “There’s guys waving and people pulling up beside the bus and they realize what it is and they’ll back up and the phones come out and they start taking pictures,” Vander Esch’s father, Darwin, said. “That’s been an ongoing event since we started with the thing at Boise State.

"People see it here, we’ll come up to a red light and everybody is waiting to go to the game and they see it, guys running up, they got their 55s on, so pretty neat to see all of that.”

The idea for the bus started when Leighton was starring in eight-man football at Salmon River High School in Riggins. With the team having to take two-hour bus rides to their games, Darwin wanted something comfortable and safe, but the plans never came to fruition.

In 2014, Darwin bought the bus for $14,000 from a company outside of San Diego. Originally it was used to take people from Amtrak stations to Disneyland. It has 610,000 miles on it, with the Vander Esches having logged about 22,000.

“It’s a good, old bus,” Darwin said. “No loose bolts or nuts or anything in it. Everything works.”

About the only things that remain the same on the bus are the ceiling and wall panels on the interior. They will soon feature the Cowboys’ blue and silver, like the overhead bins. The seats were reupholstered in Cowboys colors in October.

“Maybe we’ll do a little upgrade with some TVs,” said Darwin, who has put $31,000 into custom work on the bus, “so we can watch while we’re driving down the road a little bit. Don’t have a motion receiver for the thing, so it would be nice to have one of those and we can watch some football or whatever.”

In the back, there is a full bathroom with a shower and two sinks. There is a big refrigerator and a stove. They installed two air-conditioning units and four bunks.

“We left 16 seats in there,” Darwin said. “I do have the ability to add four more if we need to and run with 20 people.”

The bus was at almost every game Vander Esch played in his final two seasons at Boise State, including the trip to Nevada for the Broncos’ victory over Oregon in the 2017 Las Vegas Bowl. Last summer, they took the bus to a family reunion in Iowa. The lone road trip to a Cowboys game this season was to Seattle.

Check out the exclusive look @TayStern got of the 40ft decked out @VanderEsch38 bus 🚌 pic.twitter.com/G0UuvHOjjR

The longest trip, however, was the drive down to Texas earlier in the fall.

The Vander Esches keep the bus at a hunting buddy’s place in Godley, Texas, south of Fort Worth. Whenever the season ends, they will drive it back to Riggins.

Most of the work, like the vinyl strips on the side, the window screens, the paint and upholstery, has been done by friends back in Idaho.

“It’s been kind of a community project also with a lot of help from friends and neighbors and stuff like that,” Darwin said. “They supported Leighton all the way through high school, and they’re still supporting him now.”

Darwin does the driving. Others have offered, but “they’ll get up there and they’re like, ‘OK, you can have this back.’ I’ve tried to get [wife] Sandy to drive it and she’s turned that one down.”

Leighton has not driven it yet.

“It’s not anything new by any means,” Leighton said. “It’s an older bus, but it rides good.”

The day after the draft, the Vander Esches got on the multimillion-dollar bus of Cowboys owner and general manager Jerry Jones, which is complete with high-end fixtures and photos of Dallas' Super Bowl victories in the 1990s.

This week the bus will be in Lot 15 again, or maybe parked by Fishbone Grill & Oyster Bar across the street from AT&T Stadium before the Cowboys take on the Tampa Bay Buccaneers on Sunday. Darwin will be on the grill. Sandy will be cooking something on the stove. Family and friends will be hanging out and strangers will come by to take some pictures.

“It’d be nice to have an upgrade, but we’re having a lot of fun on this one,” Darwin said. “It gets us from A to B and it’s got its own history. Yeah, it’s a little bit redneck, but I don’t have a problem with that. It’s where we’re from. And like I’ve told Leighton, don’t ever forget where you come from.”