The Cowboys' offseason focus has been on keeping quarterback Dak Prescott, wide receiver Amari Cooper and defensive end Robert Quinn over Jones. And given the money needed to keep Prescott (perhaps $34 million on the franchise tag), Cooper (perhaps $18 million or more per season) and Quinn (perhaps $10 million a season, give or take), there just doesn't seem to be enough to keep Jones.

Cowboys owner and general manager Jerry Jones was asked at the NFL scouting combine if Jones would be too expensive for Dallas to keep. 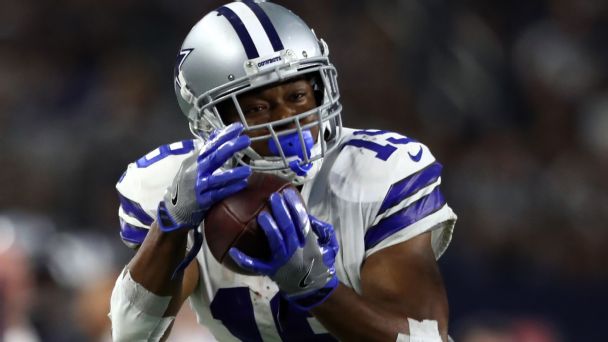 "That's not a given," Jones said. "But it's certainly pretty plain to see that when you have the players we have right now under contract, plus we have arguably three of the top free agents out there, and we have the prospects of this collective bargaining agreement, that we've got some work to do. That's a real challenge."

Byron Jones is likely to cash in big time as a free agent. Whispers around the combine indicated he could get a deal that averaged $15 million to $17 million a season from the Philadelphia Eagles, Las Vegas Raiders or Denver Broncos -- who have since traded for A.J. Bouye. That is a lot of money for a cornerback who has two career interceptions.

But are the Cowboys making the right decision? Is there more value in keeping Jones than Cooper?

The immediate reaction would be to vigorously shake your head no.

Cooper is the Cowboys' No. 1 wide receiver. He has been to the Pro Bowl twice since coming to town in a trade with the Raiders. He makes big plays. He has a great chemistry with Prescott. He rescued the Cowboys' 2018 season when the passing game was nonexistent. Don't discount the first-round pick the Cowboys gave up for Cooper in this, either. How would it look if the Cowboys gave up five years of cost certainty on a draft pick as compared to 25 regular-season games with Cooper?

But think a little bit more about it. This is one of the deepest wideout drafts in memory. At No. 17 in the first round, the Cowboys could land a wide receiver such as Oklahoma's CeeDee Lamb. He might not be Cooper, but Cowboys wideout Michael Gallup made a major jump in his second season, so a combination of Gallup and a first-round pick might not be much of a drop-off. Randall Cobb could return as the No. 3 wide receiver, which would help. And then there's Prescott. He has grown and developed as a passer from when he didn't have Cooper in 2018. The Cowboys are willing to make Prescott one of the highest paid quarterbacks in the NFL -- so in turn, he should make others better.

Now add in what happens if Jones leaves and where the Cowboys would be defensively without him. Absolutely, the Cowboys should want more than two interceptions in five seasons, but what Jones has done since moving from safety to cornerback full time in 2018 should make folks think twice.

According to NFL Next Gen Stats data, Jones was ninth best in completion percentage allowed (50%) among players with 50 targets as the nearest defender in 2019. He gave up 30 catches for 356 yards and three touchdowns. He is not targeted often, and he does not allow big plays. Jones has not had an interception since Oct. 29, 2017, but he has not allowed much, either.

If Jones leaves, the Cowboys have Chidobe Awuzie and Jourdan Lewis at cornerback. Anthony Brown also is a free agent and could resign. C.J. Goodwin is a free agent, but he is more of a special-teamer. Dallas would have to address the position in free agency and the draft. Perhaps adding a veteran such as Chris Harris Jr. at a lower price and taking a corner in the first or second round would be just as good as keeping Jones. Or maybe the Cowboys should make a bid to trade for the Detroit Lions' Darius Slay, who is entering the final year of his contract and wants a big payday. Slay has 19 interceptions in his career.

When the Cowboys signed Jaylon Smith to a five-year, $64 million extension that included $35.5 million guaranteed last summer, they effectively prevented themselves from keeping Jones. They chose to pay a middle linebacker instead of making any real effort to keep their top cornerback.

After having a Pro Bowl season in 2018, the Cowboys wanted to see Jones prove it again before paying him mega-dollars, much the same way they did with DeMarcus Lawrence after the 2017 season. It was sound reasoning, but it became irrelevant when they signed Smith.

Smith was not the same player in 2019 as he was in 2018, even if he was added to the Pro Bowl. He did not make the same impact plays. He was not good in coverage, and some inside The Star thought he was more concerned with his brand than football. One issue that affected Smith was missing most of the offseason program as he completed his degree at Notre Dame. While he worked out with the Fighting Irish, it was not the same as being around his teammates. He was not around the athletic trainers as much to continue to strengthen his surgically repaired knee, either.

Jerry Jones often compares the NFL's salary cap to a pie, and there is not enough to keep everybody -- and he's not wrong. Teams have to make difficult decisions, putting value on one player over another and one position over another.

With the Cowboys' words and actions, Byron Jones is the odd man out, and Dallas could pay an even bigger price down the road.