If DeMarcus Ware closes his eyes, he still can feel the day he was selected by the Dallas Cowboys in the 2005 NFL draft.

"Dude, I can remember the mac 'n' cheese, brisket," he said. "We had a soul food dinner -- collard greens, corn bread, all the fixings. My mom, she didn't want to order a cake. She made the cakes. Red velvet and carrot. She was like, 'No, I want it to be original.' So, she made the cakes."

Ware rented out a ballroom at an Auburn, Alabama, hotel and filled it with family and friends. The way he remembers it now, there were maybe 60 to 70 people in attendance when he got the call from the Cowboys as the No. 11 overall pick. 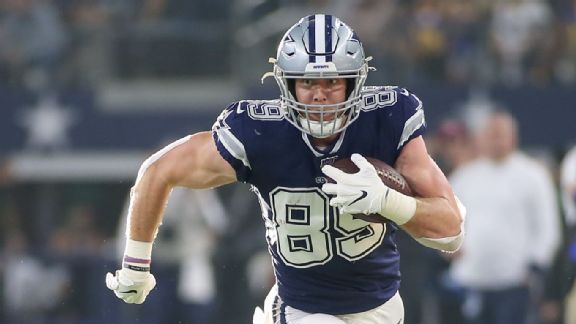 » Jarwin eager to prove what he can do
» No decisions on Cowboys prior to draft
» Video: Will Dallas go to the Super Bowl?
» More: Cowboys' depth chart, schedule

"It was a really cool feeling to be among everybody that helped you be in that room," the former linebacker said. "And now, I feel bad for these guys. They don't get to have that feeling."

Due to social distancing guidelines because of the coronavirus pandemic, draft-day parties (Thursday through Saturday) will be cut way back -- if the prospects have them at all. ESPN will have cameras embedded with 58 draft prospects throughout the three-day event. Players have been advised to maintain quarantine guidelines, which most often means no gatherings of 10 or more.

Fifteen years later, Ware's draft-day party still resonates with him -- even after becoming the franchise's all-time leader in sacks, playing in seven Pro Bowls and winning a Super Bowl with the Denver Broncos.

"It's one of the biggest days in your career," Ware, 37, said. "All the hard work. From Pee Wee football to now, that's like Stage 1 of your career, but this is the first big moment you have. You see how the hard work paid off and you can share it with all the people who helped you."

Cowboys guard Zack Martin, 29, was invited to New York for the 2014 draft at Radio City Music Hall, but he opted to stay home in Indianapolis. In 2013, his brother-in-law, tight end Tyler Eifert, was a first-round pick of the Cincinnati Bengals, and he saw how special it was to be surrounded by family and friends.

A bunch of Martin's friends from Notre Dame as well as some high school friends made the drive to his parents' house. The Cowboys drafted Martin No. 16 overall.

"We had a big barbecue, and I remember at the end of the night we're sitting out at the fire pit at my parents' house. It was kind of a send-off party as well because you leave right after. It was a celebration, but the next morning you're like, 'Crap, I'm headed to work now.' Actually, I got drafted on Thursday and was at Valley Ranch (the Cowboys' old practice facility) on Saturday, so they gave me a one-day buffer to get over the hangover and relax a little before I had to leave."

Defensive end Tyrone Crawford, the Cowboys' third-round pick (No. 81) in 2012, was at his Canadian home in Windsor, Ontario, for the draft.

"I actually missed [the Cowboys'] call," Crawford said. "My agent had to get me. I found out right before it was announced on TV. I was downstairs playing cards with my friends and my wife, who was my girlfriend at the time."

Crawford, 30, was not sure what round he would be picked, so the plan was for a multiday party at his house, which wasn't abnormal because his mother had always held the family parties over the years.

"We probably had like 40 people there," Crawford said. "It was special to have the people [there] that are still huge parts of my life. It's huge to have those pictures and those moments with them. It's also a little nerve-wracking because there's a lot of eyes on you and a lot of people have different expectations for you than you do for yourself. So, they'll see guys' names go by and look at you like, 'Why aren't you one of those guys?'"

Like Ware's mother, Crawford's mother "was not the catering type. We had a family dinner. My aunt who brings the mac 'n' cheese for other stuff brought the mac 'n cheese. Another aunt brought the mashed potatoes. My mom, she cooked everything else. Fried chicken, pasta, fruit plates. There was really good desserts. Cheesecake."

Unlike Ware, Martin and Crawford, Cowboys tight end Blake Jarwin was not drafted, but he still held a draft party in 2017 with family and friends in Tuttle, Oklahoma. He wasn't sure he was going to get drafted, so the expectations weren't too high.

His phone started ringing during the draft's seventh round, but it was mostly teams trying to butter him up to sign with him as a free agent. The Cleveland Browns called. So did the Philadelphia Eagles. But he chose to sign with the Cowboys. He played for three seasons before signing a four-year deal in March that guaranteed him $9.25 million.

"You're still seeing your dreams come true even if you're not drafted," Jarwin said. "It's a mixed day for sure, but you still have a smile on your face because how many people get that opportunity?"

As the former and current Cowboys players remembered their draft experiences, it dawned on each one of them that this year's class will have a completely different experience.

"If I was one of those guys getting drafted, I would probably go get about three rooms and put 10 people in each room with a big screen and we can Zoom each other, talk to each other. Now you'll see everybody in the other rooms, but it will be a little bit safer."

Crawford mentioned video conferencing as a way to include more folks.

"Use the internet and use the things we have to make it as memorable as you can," Crawford said. "You can still make it special."