Defensive end Aldon Smith will get to make his first impression on the Dallas Cowboys on Tuesday, now that he has been conditionally reinstated to the NFL and can participate in the team’s virtual offseason program.

He can concentrate on sacking the quarterback again for the first time since his last regular-season game in 2015, when a series of suspensions because of legal and substance abuse problems derailed what was a promising start to his pro career.

At 30 years old, this is likely Smith's last chance to deliver on that potential. In 2012, his second year, he set the San Francisco 49ers record for sacks in a season with 19.5. In his first two seasons, he had 33.5 sacks, breaking the NFL mark held by Pro Football Hall of Famer Reggie White. Since sacks became an official stat in 1982, his average of 12.9 sacks per 16 games is tied for second most behind J.J. Watt and White (13.7). 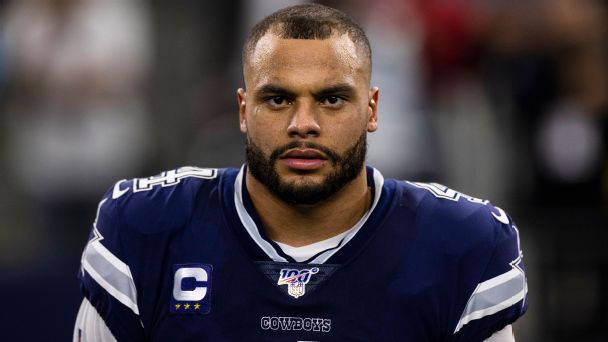 "I say this with all honesty," said Leonard Davis, the former Cowboys Pro Bowl guard who was Smith's teammate with the Niners in 2012, "he was a legitimate DeMarcus Ware-type player. He's tall. He's long. He's very athletic. And he plays with leverage. He's got good instincts, too. The dude can rush the passer.

"He not only can rush the passer, but he could play the run, as well. He wasn't afraid to play the run. Some guys, all they care about is the sacks, but that wasn't him."

A staggering descent through a series of NFL suspensions led Smith, at one point, to sleep under a car in 2018, seemingly out of hope.

To get this chance to play in the NFL again, Smith had to convince commissioner Roger Goodell his past was gone, even if not forgotten. Smith has had to go through rigorous protocols set forth in the guidelines of the league's substance abuse policy; he has tested clean for the past eight months.

"This is one of the most incredible turnarounds you will ever see," said Jay Glazer, the Fox NFL insider and co-founder of Merging Vets and Players (MVP), a program designed to help military combat veterans and professional athletes deal with all sorts of issues through working out at his gym and integrating peer support.

Glazer knew Smith the football player from his four NFL seasons in San Francisco and one in Oakland and said he did not particularly like him. When he found himself out of the league, Smith was introduced to Glazer as he looked to get his life straight. The 2012 All-Pro player joined the MVP program in September 2019.

The athletes and veterans work out for 30 minutes and then go to what is called The Huddle to discuss depression, post-traumatic stress disorder (PTSD), chronic traumatic encephalopathy (CTE) and suicide, among a host of topics, to help each other cope. As Smith listened to the vets' stories, he opened up about his own, as well, according to Glazer.

The program meant so much to Smith that before he signed with the Cowboys in early April, he broke the news on a videoconference call to MVP folks in Los Angeles first; then a few hours later, he thanked the MVP chapter in New York on social media. Smith wants to add an MVP chapter in Dallas once he gets settled.

It was during those workouts and huddles that Smith mentioned playing football again.

"I said, 'Well, you've got your mind healthy, you got your soul healthy. Do you want to try to give it a shot? Let's go. Let's walk this walk,'" Glazer said.

Glazer felt Smith had changed when he told him, "I'm not owed another shot in the NFL."

"A ton of guys we work with, it's, 'Oh, the league screwed me,'" Glazer said. "Aldon is the other way. He says, 'I screwed up every chance. It's all my fault.' He said that and it's like, OK, let's train. You want someone to take full responsibility."

As Smith progressed, Glazer reached out to a number of agents to see if they would represent Smith. Ron Slavin was the only one to return Glazer's call.

Slavin, who represents six other Cowboys, knew Smith as one of the NFL's best pass-rushers and also knew of the many mistakes that led to Smith's indefinite suspension. He met with Smith in January for two days in Dallas before agreeing to become his agent.

"I just wanted to meet with him face-to-face and see that he was in the right place mentally, and the first words out of his mouth were he had to quit blaming anybody else and own up to the mistakes," Slavin said. "Once I heard that, I knew he was ready to move forward."

As Slavin reached out to teams to see if there would be interest, Smith worked out. Smith was in the midst of an eight-month string of workouts at Glazer's gym. Soon Smith physically looked like he did when he was the No. 7 overall pick of the 2011 draft, two spots ahead of where the Cowboys drafted Tyron Smith.

Smith kept getting stronger and leaner. When he signed with the Cowboys, he weighed about 288 pounds.

"He thinks this is the best shape he's been in his life," Slavin said. "He's been doing MMA every day for more than six months."

The coronavirus pandemic limited some of Smith's work, but he then began work on football drills.

"When he put his hands on me, it felt like Kyle Long," Glazer said, referring to the former Chicago Bears offensive lineman. "Kyle's probably the strongest dude that's put his hands on me. Myles Garrett is up there with the strength and speed, but [Smith] feels like Long, which sucks [when getting tackled]."

Over the past month, Smith has been in Dallas, continuing his MVP meetings via videoconference calls and his workouts in public spaces.

"He's working with Brandon Tucker, a defensive line coach that works with a bunch of NFL players in Dallas," Slavin said, "and the first time Aldon hit him with the pads, he said, 'I felt like I was getting hit by a frying pan.'"

No one knows what Smith can become as a football player. The Cowboys hope he can regain some of the form he had and aid their pass rush, even after the long layoff. Smith and Mike McCarthy made a connection when the Cowboys coach visited Glazer's gym last year, well before McCarthy interviewed for the Cowboys' vacancy. The connections also include Cowboys defensive line coach Jim Tomsula, who was with Smith in San Francisco.

"As we went through the whole process with other teams, it just became clear the Cowboys were the ones that would be the best situation for him," Slavin said.

Smith last played in a game on Nov. 15, 2015, for the Raiders. On the fifth play of the fourth quarter, he sacked then-Minnesota Vikings quarterback Teddy Bridgewater for a 6-yard loss. That made it 47.5 sacks in Smith's 59 games. Two days later, he was suspended by the NFL for a year.

If he sticks on the Cowboys' final roster, he will have gone 1,764 days between games, provided the 2020 season kicks off as scheduled against the Los Angeles Rams at SoFi Stadium on Sept. 13. According to Elias Sports Bureau, that absence would not rank even inside the top 30 for longest time between NFL games.

In the reinstatement letter that was delivered last week, Goodell mentioned how Smith could help others with similar issues if he succeeds in his return.

"At MVP, our thing is to be a story to others," Glazer said. "He has brought it up on many occasions. He wants to help in telling his story to help rookies and other players. He's raw. He makes no excuse for his s---. He's just not the same guy. He's just not."