FRISCO, Texas -- Before last Sunday, Amari Cooper, Michael Gallup and CeeDee Lamb were something mythical, like a fantasy football dream.

After one game, even in a 20-17 loss to the Los Angeles Rams, things were not perfect for the Dallas Cowboys' wide receiver trio, but it is easier to see what they can truly be as the 2020 NFL season gets going.

Cooper finished with 10 catches for 81 yards; Lamb had five catches for 59 yards; Gallup had three catches for 50 yards but had a 47-yard reception negated by a pass interference penalty on an ill-fated final drive. 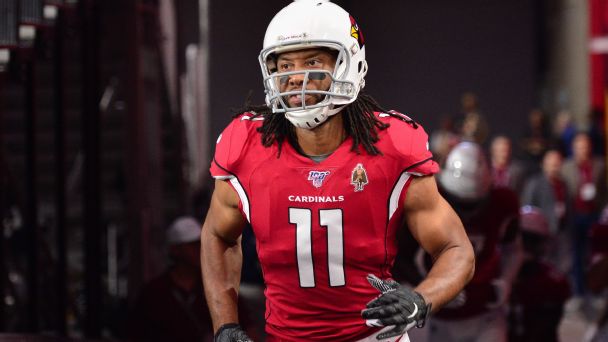 Only five times in NFL history has a team had three pass-catchers reach 1,000 yards in the same season.

Expectations are massive for the Cowboys and this trio -- which some believed could be the best in the league -- and that was before Lamb played a game. Could they become the best trio in team history?

The Cowboys have had formidable receiver duos in the past: Bob Hayes and Lance Rentzel; Drew Pearson and Tony Hill, Michael Irvin and Alvin Harper, Terrell Owens and Terry Glenn, Dez Bryant and Miles Austin.

Among the NFL's current trios, Kansas City's Tyreek Hill, Sammy Watkins and Mecole Hardman rival Cooper-Gallup-Lamb. In league history, most will cite Minnesota's Cris Carter, Randy Moss and Jake Reed, but Reed topped out at 646 yards in a season after Moss' arrival. Washington's Art Monk, Ricky Sanders and Gary Clark all went for more than 1,000 yards in 1989.

Cooper did not shy away from setting a high bar.

At the start of Cowboys' training camp, he mentioned the possibility of having three 1,000-yard receivers. After all in 2019, Cooper (1,189 yards) and Gallup (1,107 yards) became the first Cowboys' wideouts to post 1,000-yard seasons in the same year since Owens and Glenn did it in 2006. Add Lamb, the Cowboys' 2020 first-round pick, and the possibilities seem limitless.

In addition to Washington in 1989, only four other times in NFL history has a team had three pass-catchers with 1,000-yard seasons in the same year. The last time it happened came in 2008 when Larry Fitzgerald, Anquan Boldin and Steve Breaston reached four figures each for the Arizona Cardinals.

"We're going to work until it gets done," Lamb said in training camp.

Two years ago, the Cowboys opened with a receiver crew of Allen Hurns, Deonte Thompson, Cole Beasley and a rookie Gallup, hoping a wide receiver by committee could help quarterback Dak Prescott. It did not. The Cowboys then traded a first-round pick for Cooper, signed him to a $20 million a year contract and subsequently drafted Lamb in the first round to pair with Gallup, who was a third-round pick.

"We're at a place where we have to fast forward and we have to play at a high level because expectations are there," Cowboys receivers coach Adam Henry said.

The three are the same in some ways, but different. Cooper is a quiet superstar, almost introverted. Gallup is also quiet but has made plays on the field that look a lot like Bryant at his peak. Lamb has an electric smile and dons No. 88, also worn by Bryant, Irvin and Pearson.

Prescott showed Sunday he has faith in the trio. He went to Cooper three straight times on the Cowboys' final drive. On the fourth-and-3 play earlier in the fourth quarter, he went to Lamb but the play was foiled by Rams safety Jordan Fuller, who stopped him a yard short. On the final drive, Prescott was unafraid to go long to Gallup, who was covered by the highest-paid cornerback in football, Jalen Ramsey.

"Michael Gallup is a guy that that I trust every time, especially in a deep-ball situation," Prescott said.

The abundance of talent can be a challenge, especially for Prescott and offensive coordinator Kellen Moore, who will have to ensure running back Ezekiel Elliott also gets the ball.

ESPN analyst Dan Orlovsky has advice for both.

The thinking being that if one of them knows they're not going to get the ball against a coverage, they will not run with the same energy, which will affect Prescott.

"For Dak, you just have to have a very candid conversation with them," Orlovsky said. "'You guys are all great and I'm aware how great you are. My job is to play as well as I can, and I'm going to go through my progression and throw the ball where I think I should. You guys do your part.' There's 65 snaps a game, there's 16 games. There's plenty of snaps for us to all be happy and if we do that over 16 games, that means we play a 17th game and potentially a 18th, 19th and 20th game."

The 2008 Cardinals went to the Super Bowl. The 1980 Chargers, who were the first team to accomplish the feat of three receivers with 1,000 yards each, with Kellen Winslow, John Jefferson and Charlie Joiner, made it to the AFC Championship Game. Washington finished 10-6 in 1989 and missed the playoffs despite the success of Monk, Clark and Sanders. The 1995 Atlanta Falcons made it to the wild-card round with Eric Metcalf, Terance Mathis and Bert Emanuel eclipsing 1,000 yards each.

The closest comparison to how the Cowboys would like to play would be the 2004 Indianapolis Colts. Quarterback Peyton Manning had Marvin Harrison, Reggie Wayne and Brandon Stokley to throw to and Edgerrin James ran for 1,548 yards. They went 12-4 and lost in the divisional round of the playoffs.

"We're very fortunate to have three players with that level of potential to play at that level," Cowboys coach Mike McCarthy said. "Now, the reality of it is everybody wants to live by numbers. It really comes down to opportunities."