FRISCO, Texas -- Quarterback Dak Prescott's short pass to Amari Cooper was perfect, right between the 1 and 9 on his jersey, but the Dallas Cowboys' wide receiver wasn't happy with himself since he had to grab it twice.

Cooper wants perfection. All the time. Even in an organized team activity in May.

"Amari can do whatever he sets his mind to. He's that gifted," receivers coach Sanjay Lal said. "Not just physically but mentally. With Amari, it's can he do everything at an elite level? That's where the mind discipline comes in because he has the talent to be elite in every aspect of his game. He's such a great athlete, such a really good player, he has to hold himself to a standard of, 'Hey, I'm elite. I'm going to play and practice that way,' and I have to hold him to that standard. What is your level of play and can you keep it there for 50, 60, 70 plays?"

Cooper's transition to the Cowboys after the Oct. 22 trade with the Oakland Raiders could not have gone better. He helped correct a lot of wrongs with a Cowboys offense that struggled to throw for 200 yards a game without him.

After the acquisition, Prescott completed 71.3 percent of his passes and averaged 274 yards per game. Cooper led the Cowboys with 725 yards and six touchdown receptions despite playing in only nine games with Dallas. He was third on the team in receptions with 53. He had touchdowns of 75 and 90 yards.

The Cowboys were 3-4 before Cooper arrived and went 7-2 with him.

All of that happened with him forced to learn the offense on the fly.

Now, he has an offseason to learn the ins and outs of what new coordinator Kellen Moore wants and Prescott likes.

"It's obviously a very good thing to get a full offseason with your quarterback, the guy who's going to be throwing you the ball on many different types or routes," Prescott said. "So we just need that chemistry to get better and better."

The Cowboys moved Cooper around the formation some after the trade.

Including his time with the Raiders last season, Cooper ran 428 routes, with 252 coming wide to the right, 176 wide to the left, 58 in the left slot, 57 in the right slot and five lined up tight to the left tackle, according to Next Gen Stats. During the organized team activities and minicamp, Cooper has mostly worked outside, but he has lined up in either slot and has gone in motion more.

"For him, it's seeing the whole picture now," Moore said. "Him being here for an offseason, you're able to move him around a little bit more, put him in some different spots, some formations, motions, all that sort of stuff. That stuff will help us help him and create opportunities for him."

The versatility of the receiving corps will help, too. As much as the Cowboys talked about using Cole Beasley outside and expanding his route tree, he mostly lined up in the slot. According to Next Gen Stats, 90 percent of his 673 snaps came from the slot in 2018. He lined up wide just 68 times. 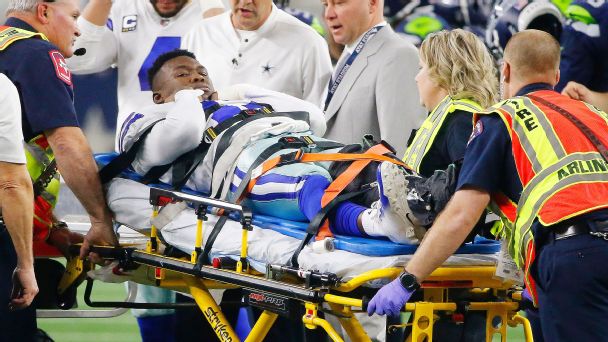 "He can run our dodge route, which is an option route, as good as anyone," Lal said of Cooper. "And he can run a 9 route (a go route) as good as anyone. So he has the ability to be equally good inside or outside."

The Cowboys have not had a No. 1 receiver as adaptable as Cooper in quite some time. Dez Bryant was mostly an outside receiver in becoming the franchise's all-time leader in touchdown catches from 2010 to 2017. Terrell Owens' best work from 2006 to 2008 came outside as well. Miles Austin's two-year run as a Pro Bowler saw him succeed inside and out, but not to the extent the Cooper can.

"He's got a really high football IQ," coach Jason Garrett said. "I think he's a smart person. He's certainly a very smart football player, and I think he and Dak developed a connection. Just the way they communicated with each other and how they got themselves on the same page, it was really positive. But again, the more time on task you have, I think the better opportunity you have to do that even at a high level."

Cooper enjoys a challenge. In January, he put on Instagram a video of him solving a Rubik's Cube in less than three minutes. This offseason, he has had ongoing chess matches with cornerback Chidobe Awuzie.

In between, he has worked on the nuances of running specific routes, detailing to Garrett an issue he had with a particular angle on a route because he could not get his footwork down properly.

"He wants to be great at it," Garrett said. "He's very willing to work at it, do extra, try to understand what we're asking him to do to execute at a higher level. Certainly a pleasure to coach -- we love having him here."

No one more than Prescott, who noted a conversation the pair had after an OTA in which they failed to connect a few times. They worked together to correct the issues.

"We know it's going to pay us well coming into the season," Prescott said. "It's been great. He's a smart guy that wants to learn, be on the same page. When you have that, it makes it fun."