Inside the eight days it took the Dallas Cowboys to hire a head coach
1yTodd Archer
Let's project all 14 seeds in next season's NFL playoffs: Why the Bucs and Packers will be back
4dBill Barnwell
Cowboys' positives in 2020 included rookies, Dalton Schultz and others
5dTodd Archer
Michigan turns to Cowboys' Linguist as co-DC
5dAdam Rittenberg
Sources: Cowboys LB Smith set for wrist surgery
10d
Cowboys need to be careful thinking injury returns are a cure-all
11dTodd Archer
Why Jerry Jones won't pull a John Elway and step down as Cowboys' GM
12dTodd Archer
Dallas Cowboys must give Dan Quinn talent or defense won't improve
13dTodd Archer
Cowboys turn to Quinn as defensive coordinator
13dAdam Schefter and Todd Archer
One year in as Cowboys' coach, Mike McCarthy says 'we have a lot of work to do'
16dTodd Archer
Cowboys' defensive failures cost Nolan, Tomsula
16dTodd Archer
Jan 7, 2020

FRISCO, Texas -- Jerry Jones and Stephen Jones did not enter Saturday's interview with Mike McCarthy with a preconception that he would become the Dallas Cowboys' coach less than 48 hours later, but a high-ranking source said McCarthy "blew the socks off" with his interview.

After their first face-to-face meeting lasted more than 12 hours, the Joneses felt like they did not need to talk with other candidates.

The realization that McCarthy would become the ninth coach in the history of the Cowboys -- something the team has yet to officially announce -- capped a wild chain of events that started almost immediately after the 2019 regular season ended with a 47-16 win against the Washington Redskins on Dec. 29. 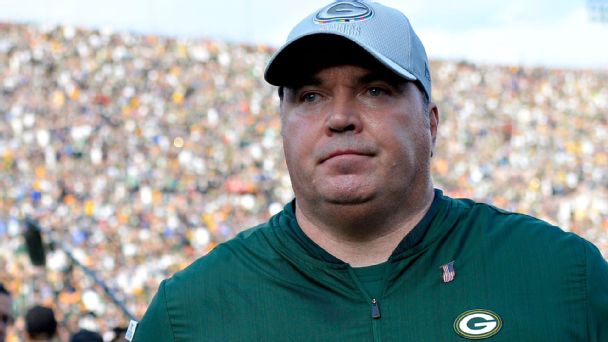 Multiple sources inside the Cowboys organization thought Jerry Jones was going to make the decision to move on from coach Jason Garrett immediately after the game. Instead, it took seven days for the break to become official. Garrett's contract is set to expire Jan. 14 and his status with the team had been uncertain since last February, when the Cowboys opted not to offer him an extension.

As is customary after every season, Garrett met with the Joneses at The Star the day after the Washington game, following a brief meeting with the players in which the coach and the owner and general manager spoke. Garrett and Jones met again on Tuesday, Dec. 31 for about an hour, but no resolution was made on the coach's fate.

That night, Jones flew to Aspen, Colorado, to celebrate the New Year with family, but reports of a third meeting between Jones and Garrett on Jan. 2 were incorrect. Nothing was scheduled, and Garrett did not go into the office that day.

ESPN's Ed Werder reported on the evening of Jan. 2 that the Cowboys had decided to move on from Garrett and he would not have a role within the organization.

Ed Werder says Jerry Jones and the Cowboys decided to move on from head coach Jason Garrett due to the team repeatedly failing to live up to expectations.

The high-level source said there was never a time Garrett was considered for a front-office role with the Cowboys. Garrett stated after the Washington game he wanted to continue to coach and he wanted it to be with Dallas. The high-ranking source said that had the Cowboys not been overwhelmed by McCarthy or any other candidates, there was a chance Garrett could have returned as coach.

Given the structure of the organization, there was no substantive role available for Garrett with Jerry Jones as general manager, Stephen Jones as executive vice president and Will McClay as vice president of player personnel.

Since 2014, McClay has helped build a roster the Joneses thought was the strongest since the 1990s and he was mostly responsible for the drafting of six Pro Bowl players.

Plus, the Joneses did not want the new coach to be burdened by seeing the Cowboys' former coach around the building.

The Cowboys first wanted to explore the experienced coaches available. Late in the season, Jones said on 105.3 The Fan in Dallas that college coaches have the lowest success rate of any new coaches coming into the NFL. The high-ranking source said the Cowboys did not reach out to Oklahoma's Lincoln Riley, who had been rumored as a potential candidate for two years, directly or indirectly.

On Friday, Jan. 3, Marvin Lewis, who had a 16-year run as the Cincinnati Bengals coach, arrived for the first interview, falling in line with the ESPN report that the Cowboys had opted to move on from Garrett. His interview carried over into the next morning before McCarthy's arrival later in the day.

The Cowboys' familiarity with McCarthy was mostly from afar. There was little interaction other than cursory introductions over the years. It helped that he held a 7-3 record against the Cowboys as Green Bay's coach, including two divisional-round wins in the 2014 and 2016 playoffs. A source told ESPN's Rob Demovsky that part of the Cowboys' interest in McCarthy stemmed from the fact the Joneses believed McCarthy had beat Dallas with inferior talent.

Sources said McCarthy's interview with Dallas "could not have gone better." He spoke openly about his time away from the sidelines, how he would use analytics and about who would be on his coaching staff. Before anybody noticed, his interview had lasted well past midnight.

McCarthy spent the night at Frisco's Omni Hotel, which is connected to Ford Center at The Star; not at Jerry Jones' Highland Park home.

On Sunday, Jan. 5, the Joneses were convinced McCarthy was their guy and they informed Garrett he would not be back in 2020, as Fox Sports first reported. Jones put out a lengthy statement thanking Garrett for his work and dedication after so many years as a player, assistant coach and head coach, dating to 1992.

On Monday, the Cowboys reached an agreement on a five-year deal with McCarthy, bringing an end to their search and the end of an eight-day odyssey that at times was an adventure -- even for the Cowboys.