Before the Golden State Warriors closed out the Portland Trail Blazers with a 125-121 win in Game 5 on Wednesday night, there was the small matter of a celebratory event.

There's a classic NBA wariness regarding pregame MVP ceremonies. It's a disruption of routine, a moment to acknowledge the season when the present is far more pressing. Stephen Curry, now healthy, had returned to Oracle Arena, but it remained to be seen whether Golden State could resume its old flow.

The "M-V-P" chants rumbled, and a video played a cut of Curry's exploits this season. At the beginning of the video, Warriors owner Joe Lacob joyously shouted "Monster!" as a victorious Curry moved past.

On some nights, such as in overtime of Monday's Game 4, Curry indeed looks quite monstrous. He's a mutant who can seize the game and sports zeitgeist in a way that feels surreal. A human vulnerability like last round's knee sprain only sets up his glorious, supernatural comeback.

He is, however, human. The man has carbon-based, muscle-girded knees, one in particular that needs healing. To begin Game 5, Curry played with savvy, but not so much with force. The burst wasn't quite there on his drives; the legs weren't quite there on his 3-pointers. And to start, the Warriors looked less than themselves, falling into an 11-point deficit. Curry finished the first half 3-of-9 with seven points.

Thankfully for the Warriors, they have another offensive force whose monstrous moments come with regularity. Klay Thompson continued his breakout playoffs, holding down the fort in Game 5 until Curry found his groove, while also putting the clamps on Damian Lillard (7-of-24, 28 points). Thompson had 33 points through three quarters.

After the game, Curry gave a nod to how Thompson had built a bridge to victory.

"I will have to say one thing, though," Curry said at the end of his postgame news conference, freezing the room as media members were getting up to exit. "I think Klay was in here earlier. That dude had the best series I've ever seen him play on both ends of the floor, defending [Lillard] -- exhausting all his energy to make it uncomfortable for him -- and what he's able to do offensively.

"Hopefully that doesn't get lost in our series and the way we played as a team."

Curry ended with, "Shout-out to him for elevating his game on both ends of the floor." 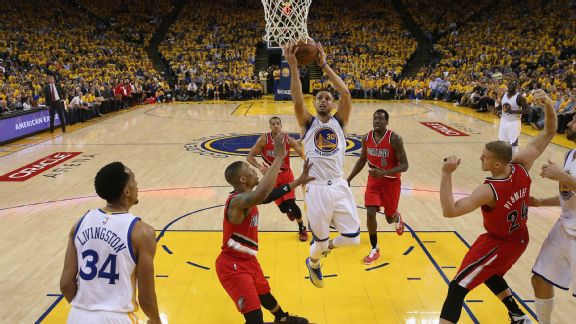 Stephen Curry and the Warriors were ultimately too much for the Trail Blazers, advancing to the West finals after their 125-121 Game 5 win.
5-on-5: Next for Blazers? »
Box score »
Game highlights »
Fan reaction »
Game HQ »
2016 NBA Playoffs coverage »

Thompson didn't score in the fourth and didn't need to. Curry kick-started the final push.

The pattern, insofar as two games can speak to a pattern, is that Curry starts rusty and dominates late. This time, in the fourth quarter, Curry dropped 14 points, including a dagger 3-pointer with 24.9 seconds left to ultimately put the game out of reach. The play was classic Curry, in that it'd be a horrific play for almost anyone else: going behind the back, hopping backward, looping a leaning bomb over Al-Farouq Aminu's outstretched futility. Game broken, game over.

Or, as Warriors coach Steve Kerr summarized, "Klay's shooting was incredible tonight. Then the way Steph finished the game, that step-back shot to put it to a five-point lead was probably a shot only he can make. So I thought a gutty effort from a lot of guys. It wasn't our best stuff, but we got it done."

It's a win Golden State badly needed. Andrew Bogut exited the action in the first half with a strained abductor. Draymond Green left for a spell in the second after appearing to tweak his ankle. Throw in Curry's continued knee sprain recovery, and closing this game matters in a broader context.

Now the Splash Brothers lie in wait, as monsters sometimes do. Ending this series early helps them restore their fearsome form. Portland offered a steady resistance, but the biggest challenge has yet to come. Golden State enters the Western Conference finals battered, but not broken, hoping to wreak more terror.