OKLAHOMA CITY -- With 5:48 remaining in Game 6 of the Western Conference finals, the Golden State Warriors were surely doomed. The Oklahoma City Thunder led 94-87 and Steven Adams was at the line for a second free throw. At this moment, Oklahoma City was in the bonus, while Golden State had yet to draw a foul in the quarter. Draymond Green, crucial to any theoretical Warriors comeback, was protecting the rim while carrying five fouls.

There was little hope, logically, and yet the defending champs were confident, at least to hear them tell it following the 108-101 victory. Klay Thompson, he of the 41 points and record-setting 11 3-pointers, was at his locker, striking the pose of exhausted reverie. He wore socks with Yoda's image, with a towel draped over his shoulders, looking not unlike the Jedi Master's robes. When asked if he ever doubted, the perpetually Zen Thompson scoffed. "Psh," he grunted, before shaking his head. "Never."

After the shocking comeback, Green was asked if there was ever a moment of doubt.

"No," he replied. "Because even when shots weren't really falling for us. They get a bounce here and there, when we've defended. We're still right there. Every time something went wrong. We were still right there. So there was never a moment where I said, 'This ain't our night.' I always felt like, this game right here for us to take."

Green, who went on to force two crucial Oklahoma City turnovers was honest about his emotions going into an elimination game, though. "It sucks," he said, while plating a postgame meal.

The Warriors have been on the brink since Game 4 this past Wednesday. They've now dodged two bullets and hope to duck yet another on Monday. This is what they live for, but the leadup is grueling. The desperation is searing, but the payoff is like nothing else.

Golden State staffer Kelly Peters interjects, speaking of the adrenaline-soaked escape from Oklahoma City. "That's what also makes life, bro. It's the reason we play sports. What's better than this?!"

Warriors fans most assuredly weren't having fun with a little less than half a quarter remaining in this game. As Tom Haberstroh pointed out on Twitter, at that juncture, Inpredict had Oklahoma City with a roughly 90 percent chance to seal a Finals trip. What followed was a desperate champion, seizing moment after moment. It was the Warriors as we've known them, playing small, attacking viciously on both ends of the floor. The following is a breakdown of how they defied those bleak odds.

5:33: Thompson curls around a screen from Andre Iguodala, and Kevin Durant leaps out to prevent a 3-pointer. Thompson flings the dribble past Andre Roberson's outstretched arms, and slinks past Russell Westbrook who attempts to take a charge. 94-89 Thunder.

5:09: Iguodala bats the ball from Durant, who recovers and works hard to hit a pullup jumper. A bucket for Durant, but one that required immense effort. 96-89 Thunder. Note: This will be the last field goal by any Oklahoma City player not named Roberson.

4:57: It starts with an unconventional, Warriors-style look, as Green handles as point guard while Stephen Curry and Thompson both set screens like big men in a typical HORNS set (near the top of the key). Thompson fans out deep behind the arc and receives a pass. He stops, he pauses, he sizes up Westbrook, who's crouched in a defensive stance. Thompson does what he often does. He looks at a stationary defender, remembers he has a size advantage, and delivers a 28-foot strike. 96-92 Thunder.

4:32: Thompson drives on Roberson, gets swatted out of bounds. Green walls off Westbrook, who gambles for a steal on the inbounds. Green gets the ball at point-blank range and draws a foul. He makes 1-of-2. 97-93 Thunder.

4:13: Durant tries to get to his spot for another midrange jumper. Iguodala does his typical swipe down distraction move and Harrison Barnes adds a closeout. The shot misses front rim.

3:20: A broken possession for the Warriors after Curry drives into the defense. The ensuing ball movement is well contained by Oklahoma City and results in a rushed, shanked Iguodala 3.

2:55: The Warriors are in what might even be a 2-3 zone. Curry ignores Dion Waiters to help Iguodala on Durant. KD gets flustered and throws the ball away.

2:48: Barnes gathers the turnover, races down the floor, and pitches the ball to Curry beyond the arc. Swish and a long pose from Steph. Tied at 99. 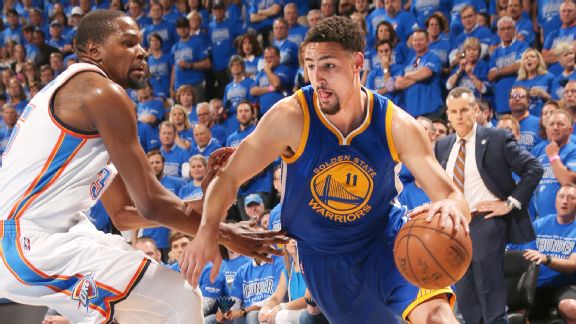 2:25: Westbrook gets space from a screen and Green steps up to help. A wild shot gets tapped to Thompson, who is standing out of bounds. On the ensuing possession, Durant isolates on Barnes and misses another midrange jumper. Roberson recovers for a putback. 101-99 Thunder.

2:06: A disaster of a possession for Golden State that works out. The Thunder bust up a split cut between Thompson and Curry, so Iguodala has to try and drive at Roberson. He gets the finger roll to fall. Tied at 101.

1:40: Durant sets a screen for Westbrook, prompting Iguodala to switch onto the Thunder point guard. Westbrook attempts to drive, slips slightly and recovers. As Westbrook begins to load a jumper, Iguodala swipes the ball away.

1:23: Durant gets a screen off the ball and receives the pass. Iguodala recovers quickly, forcing a badly missed 3.

1:01: Curry gets the switch and attacks Serge Ibaka off the dribble. He misses the layup in part due to a contest from Durant.

0:55: Westbrook snatches the ball, and pushes in transition. Suddenly, Green demonstrates the value of a "center" who can move. He races behind Westbrook and knocks the ball loose on an uncalled reach-in. It bounces out of bounds, off Westbrook.

0:39: The Warriors run one of their favorite crunch-time plays -- a Thompson for Curry pick-and-roll, where Thompson slips the screen to get open. Thompson misses the 3, and Durant shovels the ball to Westbrook. Again, Green appears out of nowhere to knock the ball loose, back to Golden State.

0:14: Now Curry has the ball and he gets Ibaka in front of him again, on a switch. Curry feints as though sidestepping for a 3, before suddenly powering past the big man. Roberson reaches in, hitting Curry's arm. Unfazed, Curry maintains possession of the ball, and lofts a high arcing banker over Ibaka's outstretched arm. Game over.

It happened so fast and yet the process was so arduous. It required immense focus on defense and a battle on the boards. Iguodala, whose defensive effort might even be classified as "heroic" declined the postgame podium in favor of walking his wife and child to the team bus. He's process obsessed, with little care as to how the outside world judges his work.

Maybe that's the only way to win when your team's place in history is on the line.

In retrospect, the comeback was much like Iguodala himself: business like. The Warriors had their backs against the wall. They survived because they remembered who they were, play by play, when it mattered most.