CLEVELAND -- With a 108-97 besting of the Cleveland Cavaliers on Friday night, the Golden State Warriors prevailed again when tested. This was most especially true of Stephen Curry, who answered a couple of days' criticism with a 38-point, six-assist performance in what was a complete Golden State effort.

This might not have been the nadir for Curry, but the criticism had perhaps never been louder. You had the quarterback of his favorite football team declaring LeBron James to be better. You had a massive social-media rebuke of his latest shoe release. You even had J.R. Smith stating that James and Russell Westbrook deserved MVP over him.

The unanimous MVP who'd begun the NBA Finals with averages of 16 points and 5 turnovers had opened up a wellspring of dormant resentment. Not that he appears to care, at least outwardly. Curry was mostly focused on finally starting strong in a postseason during which he has struggled to get going.

His first two shots went begging, but there was more life in this Curry start. He opened by driving at and through all the attention Cleveland was sending him as the Warriors soundly moved the ball. Though the Cavs, and especially Tristan Thompson, were ferociously rebounding their misses to begin, the Warriors stuck with it, and ultimately overcame with better ball movement and better defense. 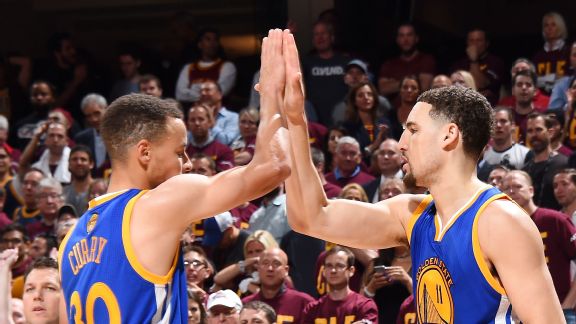 Despite his starting lineup's woes in the series to that point, Warriors coach Steve Kerr began this game with Andrew Bogut at center. It might not have propelled the Warriors forward, but it also didn't kill them. In the third quarter, the Bogut lineup helped create a classic Golden State sequence: the Aussie sets a bulldozing screen on Kyrie Irving, opening up Curry for a 3-pointer, followed by a Bogut block on the other end leading to a Klay Thompson 3-pointer.

Ultimately, what helped turn the tide for Golden State was the introduction of Andre Iguodala into small-ball lineups. The 2015 Finals MVP was brilliant and ubiquitous, even snagging offensive rebounds down the stretch. His sublime defensive efforts were augmented by Draymond Green's vital play as a small-ball center. In a rare moment when James did beat Iguodala off the dribble, Green was right there, rising up to swat James at the rim.

Though the final stat line for Curry speaks to a singular scoring explosion (aided by some final intentional-foul free throws), many had a role in this. Thompson, Harrison Barnes, Shaun Livingston, and, yes, even Anderson Varejao had solid cameos. They all showed up on the road and, by late in the fourth quarter, a raucous Quicken Loans Arena had gone quiet. A couple of days' noise had vanished. Now, with quiet as the backdrop, Golden State prepares to win just one more.