This was an embarrassing loss for the Warriors and beyond that, a demoralizing one. They were at the finish line, ready to celebrate a season’s worth of work in Oakland. Afterward, Oracle’s hallways were replete with friends and family of the team, cursing the halt of catharsis, as more than a few prepped for a long flight to Cleveland. Add a ghastly-looking knee injury to Andrew Bogut, and this was about as disappointing as a 3-2 series lead could feel.

As Stephen Curry said after the loss, “I wouldn't say surprised because of what their talent level is and what they've shown in the past and, like he said, LeBron [James] in big games. It sucks that it happened tonight with the opportunity we had in front of us to close out a series at home in front of our home fans, and it's a tough feeling.”

Making matters worse, this was a much-hyped standoff, with plenty of trash talk going into the game. Golden State's news conference shots at James might have had nothing to do with what happened Monday night, but the optics aren't great. They tested James and got an all-time performance. The whole while, Draymond Green was powerless to do anything about it, serving out his suspension in the baseball stadium next door.

So, what went wrong for the Warriors? It's a three-pronged answer, if we want to be reductive about it.

On James' first 3-pointer of the game, Andre Iguodala -- who has mostly been brilliant on James this series -- did not contest his shot so much as wave in its general direction while turning away from it. While it’s typically smart to cede some space on the perimeter to James, this was a lapse. On James' second 3-pointer, Iguodala died on a screen and, again, didn’t do much to contest. 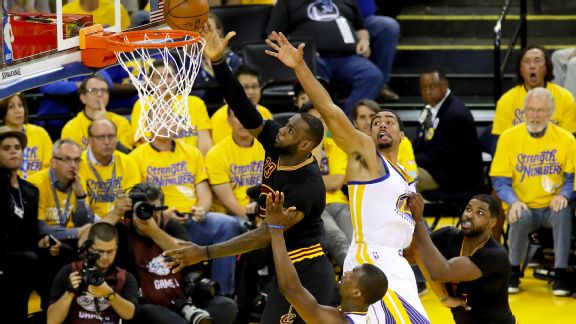 James hasn’t shot well from outside this season, but this style of defense likely helped him find his groove. After establishing the deep threat, he attacked relentlessly on switches that were rather toothless in Green’s absence. (Note: Green is a bit better at switching onto James than Marreese Speights.)

Later, Golden State had Shaun Livingston guard James, with little success. They even tried an odd tactic where Iguodala covered Kevin Love. In short, Golden State’s defense was a bit of a mess without Green, who serves as its connective tissue. James got hot from the outside and made the Warriors pay for their defensive mistakes. While it’s true that James made some "bad" shots Monday night, he simply wasn’t pressured well.

2. Kyrie Irving did the impossible

Kyrie’s amazing 41-point performance is a different matter. After guarding Irving for much of the night, Klay Thompson had this to say about his opponent’s offensive fire geyser of doom: “It happens. I mean, he's a phenomenal player, especially on the offensive end, so it obviously stings. And you watch the film and see what you can do better, but you don't let it deflate you for Thursday. You play the same hard-nosed defense and try to make them take the same contested shots.”

That net result of giving up 41 points on 17-of-24 shooting should indeed sting, but I’m not certain Thompson should beat himself up over it. Though he fell asleep on Irving’s first 3-pointer of the game, many of Irving’s following attempts were very well contested. It just happened to be a night where Irving’s brilliant shot-making triumphed. As Thompson said, “It happens.”

This aspect of the loss might hurt most. SportVu might further update its numbers, but the current reading is that Golden State went 4-of-19 on 3-pointers categorized as "wide open." A few Curry and Harrison Barnes misses prompted cringes in the crowd, as a general tightness seemed to spread across the team in the fourth quarter (Golden State shot 1-of-10 from 3-point range in the stanza).

The good news for the Warriors? Their offense worked fine. They just couldn’t capitalize. Cue Thompson's "It happens."

After Curry confided that Monday night was a "tough feeling," he reprised his role as resident optimist, saying, "But you work hard in the series early to put ourselves in this position again on Thursday, and we'll be ready. We'll obviously watch the film and understand the way the mishaps were, especially on the defensive end against those two guys. Come out with confidence and get the job done."

The Warriors are still in a great position to do that, even if winning at Quicken Loans Arena is a tall task, and even if Bogut is out for the series. They just need Green back, a more focused defensive approach and, probably, many of the same shots they missed in Game 5. Losing at home "sucks," but winning a championship in any circumstance can quickly salve that wound.