DENVER -- Midway into the third quarter, Stephen Curry dribbled the ball up the court and stopped to pop a 3-pointer from the top of the key.

Denver Nuggets center Nikola Jokic looked as if he shoved the two-time MVP right as he released the ball from his fingertips.

Curry fell to the hardwood, the whistle blew and the ball rattled in, enabling a four-point play. It was one of his seven 3-pointers, part of a 33-point outing -- on 17 shots -- that didn't include him playing a single minute in the final quarter. 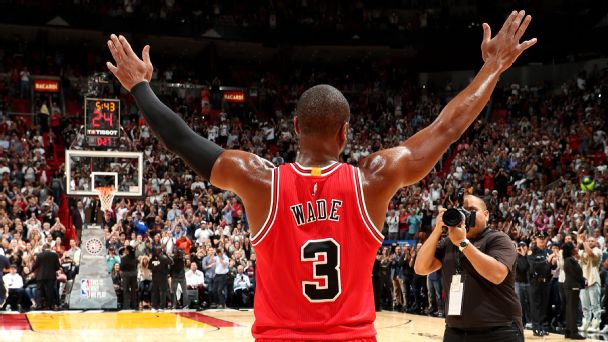 Dwyane Wade was back in Miami as a visitor Thursday night, where he and the Bulls held on for the win.

• Wade wins in Miami return: 'Couldn't wait until it was over'
• Curry puts on another long-range clinic
• A year to the day, KD's streak snapped
• Pelicans breathe big sigh of relief with W
• #NBArank: Davis | Harden | Lillard

That was the kind of night the Nuggets endured as Curry and the Golden State Warriors went into the Mile High City on Thursday and won handily, 125-101, to extend their winning streak to three games.

“I was just trying to be myself and help my team win while doing what I can on both sides of the floor while bringing some energy,” Curry said. “Obviously confidence is everything, so I have to keep that consistency.”

Curry was feeling it yet again. After knocking down three triples in a row in the third quarter, just to try his luck, he raced up the court and launched a shot just past half court that clanked off the front of the rim.

The traveling Warriors fans were waiting to explode out of their seats had the shot gone in.

“I’ve seen it all [from Steph], but it’s still entertaining as hell,” Warriors coach Steve Kerr said. “That one shot he took [near half court], I’ve seen him do it many times, but it never gets old.

"I think [Portland Trail Blazers guard Damian] Lillard and Steph are probably the only two that have that sort of ridiculous range.”

“Honesty it was a dumb shot,” Curry said. “I probably should have heat checked from somewhere closer. I had Draymond [Green] egging me on the whole way down the court. So it was like that demon and angel on your shoulders: Which one are you going to listen to? Obviously it would have been fun to make it, but I think I’m like 0-for-2 on the year, 0-for-3 on the year on shots like that, so I might need to reassess that.”

Curry singlehandedly turned the atmosphere into Oracle Arena 2.0, and in his past three games he has nailed 24 of 38 3-point tries.

The rebuilding and injured Nuggets lacked any offensive firepower and coughed up the ball 18 times, making it tough for them to contend with Golden State. No Nugget scored more than 14 points.

Draymond Green continued his long-distance assault by going 3-for-4 from downtown, making it 7-of-10 in his past two games. He finished with 13 points, nine rebounds and five assists. Klay Thompson had 19 points while going 3-of-4 from long range.

Kevin Durant ended the night with 18 points, snapping his streak of consecutive 20-point outings at 72 games -- a mark he shares with Michael Jordan and the fourth-longest 20-point streak.

Kerr pulled the plug on his evening with 5 minutes, 52 seconds remaining in the contest after Durant was called for an offensive foul for plowing over Nuggets forward Kenneth Faried on his way to the basket. Durant went down awkwardly upon contact, which was all Kerr needed to see.

“I knew about the [points] streak and I told him that when he came off the floor, but I’m not going to mess with the basketball gods,” Kerr said. “If you want to leave a guy out there to get some kind of record, you’re asking for an injury. The game called for him to come out. He came out; he had no problem with it.”

Durant added his take on the end of the streak.

“It really didn’t mean a thing to me, to be honest,” he said. “I think it was cool for the fans to see, I guess. But for me, I was going out there doing what I was supposed to do. I shot 16 times tonight and that’s on me. I’ve got to make more shots if I want to keep that thing going. It was cool while it lasted, it was fun and up there with some great names, but like I said, I’ve got bigger goals in mind.”

Some members of the Warriors feared this game since it was their second in a back-to-back and because they arrived in Denver around 3.a.m. local time. Curry’s shooting stroke made sure they wouldn’t be the victims of a trap game, as the Warriors led by as many as 31 points.

It was the Nuggets who were the ones trapped at home all night.

“I think the energy was great on both ends of the basketball,” Green said. “Back-to-back coming to Denver, it’s tough. That’s a tough flight. Two-and-a-half-hour flight after a game, you’re losing time, and to come out with the energy that we did showed that this team is maturing.”