INDIANAPOLIS -- When it was announced that three valuable members of the Pacers would be inactive for Monday's game against the Golden State Warriors, it pretty much sealed Indiana's fate.

And at the end of four quarters, the outcome was what most anticipated.

The Warriors completed the sweep of their four-game road trip by breezing past a short-handed Pacers squad by way of a 120-83 rout at Bankers Life Fieldhouse.

Indiana (7-8) was without All-Star Paul George (ankle), emerging big man Myles Turner (ankle) and sharpshooter C.J. Miles (knee). Offensive creativity was hard to come by, and finishing around the basket was made into a complicated task by the Warriors. The Pacers could not present a legitimate threat. Players were forced to step into roles they weren't equipped to handle, leading to bad shot attempts and uncharacteristic turnovers.

"Those guys, they might not be 7-foot dominant force physically, but they're athletic, they can use their length, wingspan to get up there and block shots," Stephen Curry said.

The Pacers were held to 32 percent shooting.

Golden State (12-2) remained in attack mode. The Warriors had a propensity early in the season to fall victim to complacency when up by a sizable amount, but they kept their focus on this night.

"We weren't worried about who was over there for them; we were worried about our own game and it showed," Warriors coach Steve Kerr said. "We took care of the ball, we defended well, we were on point. We didn't have a lapse, and that's a credit to our team. Sometimes you let your guard down in these situations, but our guys didn't."

They put on a clinic on how to move without the ball and find the open man. Green picked Indiana apart with his passes to cutters and shooters from the elbow.

The Pacers were always a step or two behind defensively.

"We'll certainly move on from this," Pacers coach Nate McMillan said. "Tonight, going up against these guys, we didn't have it."

Golden State improved its NBA-high winning streak to eight. During the streak, 30 assists or more has been reached in every game, tying a franchise record. The Warriors dished out 31 assists, while converting 40 field goals.

Klay Thompson was the game's high scorer, with 25 points, and he connected on four treys. He loves playing in the state of Indiana, and it was evident yet again. He came into the game averaging 23.0 points against the Pacers for his career, his highest scoring average against any team.

Kevin Durant contributed his fifth double-double of the season, with 14 points and 11 rebounds.

Stephen Curry entered the contest having connected on only six of his past 30 attempts from downtown. After missing his second open 3-pointer in the opening quarter, he took out his mouth guard and slammed it to the hardwood in disgust. He ended up missing his first three 3s but regrouped and knocked down two of his next three from downtown. 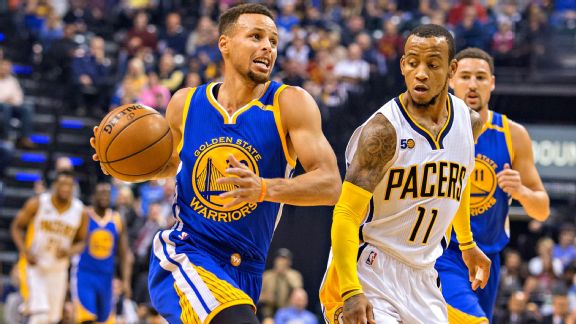 The Warriors keep rolling ahead, the Sixers are processing a two-game win streak and the Clippers are now an NBA-best 13-2.

"I usually don't get frustrated when I'm missing shots, but it's just one of those where I wanted to get off to a good start tonight and two wide-open shots didn't go in," Curry said in explaining why he was threw his mouthguard. "I'm trying to get myself going and it gets trapped in your own head a little bit. I'm just trying to get out of that."

He amazingly hit a double-pumping, three-quarters-court shot that just failed to beat the halftime buzzer, but it didn't matter. The Warriors were up 21 at the break.

And to make matters worse for the Pacers, starting point guard Jeff Teague departed in the third quarter due to a right ankle sprain. From there, the Warriors lead continued upward to 36 points. Half of the seats in the arena were vacated by the end of the third quarter.

Rodney Stuckey was the Pacers' leading scorer with 21 points off the bench.

"I feel like our team is getting better as we move forward," Kerr said. "It was a great trip to go undefeated and now everybody is anxious to get home."