OAKLAND, Calif. -- In light of Golden State Warriors coach Steve Kerr admitting recently that he used marijuana for chronic back pain, some of his players had his back on Saturday.

WARRIORS HAVE KERR'S BACK 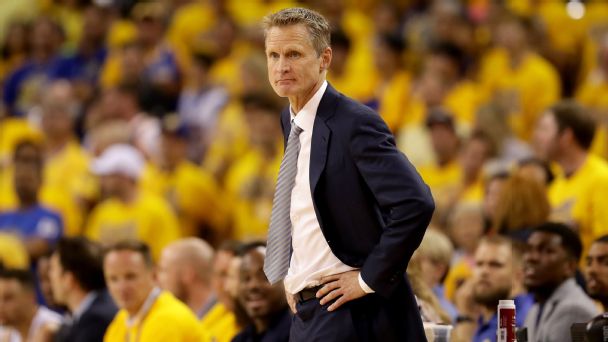 • Kerr says he tried pot for back pain

“I’ve never been a guy who has done it, period,” Draymond Green said. “So, I can’t say that I know much about it, but from what I hear from whether it’s football guys, I think a lot of them do it because of all the pain that they go through.

“And when you read Steve’s comments, it makes a lot of sense. When you look at something that comes from the earth, any vegetable that comes from the earth, they encourage you to eat it. So, I guess it does make a little sense as opposed to giving someone a manufactured pill. If something takes your pain away like some of these pills do, it can’t be that good for you.”

Kerr revealed in a podcast that he tried marijuana twice to help him recover from two back surgeries the past year and a half. He also stated that he hopes all professional sports leagues would allow for the usage of marijuana as a form of treating pain, as opposed to a prescription drug, like Vicodin.

“But not recreation use,” Klay Thompson said. “That should not be of its use ever, but there’s obviously a medicinal side to [marijuana] that people are finding out have benefits, especially people in really high pain.”

Coaches are subject to one drug test per season during training camp, with different thresholds for what is considered a positive test. NBA players who test positive for recreational drugs such as marijuana are not disciplined until their third failure.

Green first saw the news of Kerr’s comments on his cell phone.

“But, of course, we live in a world where the first thing that pops on your phone is, ‘Steve Kerr said he smoked weed twice’ because they want the headline. And then you read it, and it’s like, ‘Man, this makes a lot of sense.'”

Green and Thompson applauded their coach for being brave enough to speak out on this issue. Now that this topic is front and center on the minds of the sporting world, Green is left wondering why marijuana isn’t approved.

“The only thing I can really think of is that it’s from the earth. It’s grown from the earth,” Green said. “So, maybe it is better than a Vicodin, like [Kerr] said. ... It usually takes a guy like Steve to do something like that to where it even starts the conversation. And then you start the conservation, stuff is still at least three or four years out. Who knows?”