OAKLAND, Calif. -- It has been a night-and-day transformation with Kevin Durant and the way he has dealt with the media since becoming a member of the Golden State Warriors.

ESPN sat down with an open and candid Durant for a Q&A on how a once hostile relationship with the press has developed into something cordial.

Chris Haynes: What has gotten into you this year with your dealings with the media?

KD: I’m just more content with myself. Like, if I’ve got something to say, I want to get it off of my chest. If it’s controversy out there, or if it’s some false stories out there, I want to clear it up. That’s just what I’m all about. There’s a lot of false s--- out there and if I take up for myself, it’s a bad thing. Sometimes you just got to live with it, but for the most part, I’m like look, I don’t want no problems with nobody. I’m not out here to be beefing with nobody. I’m not out here to be showing you I’m this perfect person.

How Kevin Durant landed in the Bay 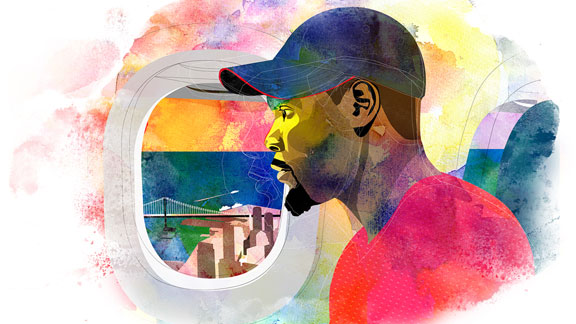 In ESPN The Magazine's Anything's Possible issue, ESPN's NBA writers reveal the behind-the-scenes tale of how Kevin Durant became a member of the Golden State Warriors.

I’ve learned that it’s harder to try to put on this goody two-shoes persona when that’s not me. It’s easier for me if I’m just open and transparent to a point. I’m obviously not going to give you everything about my whole life, but as far as my personality, you see me all the time from watching the games. So I’m not going to act like I’m this person that I’m not, because I operate bad in that space, you know what I’m saying?

CH: So how would you describe your relationship with the media in the past?

KD: I thought it was great. Amazing. Incredible. Awesome. All of the words.

KD: I’ve been in the league 10 years. I mean, I won the media award one year. Like I said, I’m open. You can go back and see quotes where we disagreed and where we agreed to disagree. It’s not always like I’m right, and you’re wrong. It’s both ways.

KD: Yeah, you don’t. You really don’t know the game like I know it, so don’t come to me and tell me my coach should be fired. Like, what is that? What would you say if I say, “Ethan Strauss should be fired from his job. He’s not good enough.” You’re going to have his back, am I right?

CH: His back? Yes. He’s credible. Not every so-called reporter is credible.

KD: For the most part, all y’all are going to have each other’s back. But when I said that, every time I looked around, there was a media member defending each other. So why can’t I defend my coach when they say he should be fired midway through season. Like, come on, man. Why even ask me that? I roll with these people every day. Don’t ask me no question like that and expect me to just answer it. Nah, I ride for my guys. That’s the bro code.

CH: I ran across an old quote of yours. You said media shouldn’t have too much power pertaining to postseason awards.

CH: Hold on. But then last week, you said we should be allowed to vote, because we’re around and we see how players prepare.

KD: Yeah, because [the All-Star Game] is split now. When I said that, I meant you shouldn’t count for every vote. That’s what I’m saying. As for the All-Star Game, it’s 50-50. Y’all do see the game a little closer than a regular fan does, but we see the game even from a bigger lens than y’all. You guys having 100 percent of the vote makes no sense to me.

CH: We still do have 100 percent of the vote for postseason awards.

CH: Moving on. Obviously, I wasn’t covering you routinely like I am now, but when I did come to OKC during your time there, you looked untouchable. Is that accurate to say?

KD: What you mean "untouchable?"

CH: We couldn’t get to you.

KD: You couldn’t do this? What you’re doing now?

CH: Hell nah. We definitely couldn’t do this. We couldn’t get within arm’s length of you without somebody body-checking us.

Like for example, I’m not saying this ever happened, but if you sat down and talk to Jeremy Lamb about, “All right, you’re not playing. How you feel about not playing?” And he says, “I want more minutes,” and the rest of the team hears that as a young group of guys, what are they going to say? It’s going to be, now it’s us versus Jeremy.

So you’ve got to look at it from that perspective. When you’ve got a young team, we had a bunch of 20-year-olds, 19-year-olds, you got to walk them through this life, because it’s different. You guys have a job to do, and it’s not to cater to the players. It’s to figure out a story. You guys aren’t working together. He’s trying to figure out his way in the league, and he shouldn’t have to be distracted about a media story.

CH: So when does it get to the point where the PR staff should allow the player to speak?

KD: That’s not my call. You can’t fault me for that.

CH: I’m not faulting you, but you even told me there were times you wanted to speak more.

KD: Yeah, there’s times I felt like I wanted to get something off my chest, but then I understood why they was like, “You know, it’s not even worth it," because distractions are real. You can easily get distracted from this, but when you’re around a bunch of veteran guys that’s been covered just like this, it really doesn’t matter. You can talk and just move on. But when you’re on a younger team and we don’t get that much coverage playing in a smaller market, that stuff can really seep in and really get a hold of the team and distract the team.

So, it’s not about me not wanting to talk to y’all or feeling untouchable. I just followed protocol. I followed the rules, you know what I’m saying? Those are the organization’s rules. I play basketball. I can’t control the media, the way I play. I can’t control all of it.

CH: OK. Fair. I’ve seen you conduct numerous one-on-one interviews in your brief time here with the Warriors. You didn’t do many during your entire tenure in OKC. Has this been an adjustment for you?

KD: Yeah, because I don’t mind talking about the game. I don’t mind talking about what we go through as players, because I want people to get a deeper look inside instead of looking at stats all the time or looking at numbers or just watching the game. I want them to get a pulse on us as players, and a lot of players might not want that, but that’s what I want. It may seem like I talk a lot.

KD: Some guys like to talk. What’s the problem with that? But for me, as a 14-year-old aspiring to be in the NBA, I wanted to hear from players. Right after the draft, I was going on NBA.com and wanted to see the guys in their jerseys and listen to their press conferences and hear their quotes, because I wanted to be that. So I want the younger kids, the basketball players in high school and college to hear from me and let them know that when you come to the league, this is what happens and this is how I feel as an NBA player. And it’s not all peachy keen.

So that’s what my motives are. I don’t [know] what everybody else’s motives are, I don’t know what your motives are, but mine is to portray the real life of an NBA player. And it’s not all about I just do everything, like I’m the hardest worker, or I love to play basketball every day, I go to the gym at eight and don’t leave until five. No, that’s not how it is. That’s not how I am. So I’m going to let you know the real, and I’m going to let you know the real as I can about me, and hopefully when you come up here, you’ll get an idea, a sense of what’s going on up here, because it’s not for everybody, I’ll tell you that.

CH: Here with the Warriors, it’s a media-friendly, player-friendly atmosphere. Raymond Ridder (the team’s vice-president of communications) is one of the best in the business in making sure players are made available to the media. Stephen Curry and Dray get a ton of interview requests, and they complete a ton. Did you think about how you would handle the media in this market, knowing how accessible players were on this team?

KD: I never really thought about it. I knew coming here that a lot of people wanted to hear from me, try to get stories from this situation or try to start controversy. So one thing I wanted to do was be open, honest and transparent with everybody about why I came here and who I am, the struggles I go through as an NBA player. I want people to know what they didn’t know about me. I just wanted them to know the real side.

Especially since I made this move, like I said, I’ve been more content with just who I am. Me as a person, I’m not the president of the NBPA (National Basketball Players Association). I don’t even know what to say. I’m not like this perfect, buttoned-up, suit-and-tie guy. I like what I like, I am who I am, I know what I want to do, you know what I’m saying? I’m not trying to be like what I thought an NBA player is supposed to be growing up.

CH: Based off of what?

KD: What you see and what you hear. And how I grew up, everybody was telling me, “You can’t do this, you can’t get tattoos, you’ve got to look a certain way.” Now, I’m like, “Why?” The only thing that matters is what’s going on in between those lines. If I come to work every day and do my job, work as hard as I can, be a great teammate, the rest of that stuff will take care of itself. And I’m going to be me at the end of the day. And I think my family appreciates that. They’re happy for me that I’m finding out who I am, and I’m content with that. My friends are happy for me, and that’s all that matters.

CH: You’re speaking out on more than basketball these days. In covering LeBron [James] the last couple of years, he ventures outside the court as well.

CH: My final question. Now that you’re doing more interviews these days, how has it been for you? Any problems?

It’s all about knowing the balance, because I like to remain somewhat of a mystery. You need to have that, you know what I mean? I’m not trying to have my whole life out there in the media. I want to have some stuff that I keep for myself, my friends, my family, my loved ones. That’s how I view. But I also know that I want to show people who I really am, especially aspiring basketball players who want to be at this level. That’s what I’m about.