OAKLAND, Calif. -- The Golden State Warriors beat the Oklahoma City Thunder 121-100 in what might have been Kevin Durant's best game of the season. Besides Durant's brilliance, the heated rematch was memorable for Zaza Pachulia's toppling and staring down a writhing Russell Westbrook.

On this evening, the Warriors were the ones punishing. The only pain they absorbed came via a David West left thumb fracture, which should sideline the veteran big man for two weeks, according to the team. West has been playing well this season and his presence will be missed. 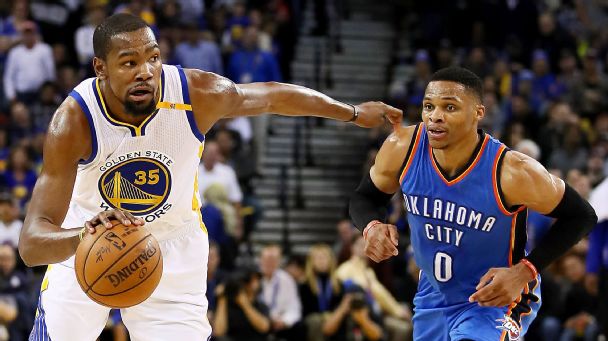 Against his former team, Kevin Durant put up 40 as Golden State topped OKC despite another triple-double from Russell Westbrook.

That's a sour note on a night that was pitch perfect for their superstar small forward. Durant played optimally against a team he had motivation to best.

"Every player in the NBA wants to play well against his old team," Warriors coach Steve Kerr said of Durant's performance. "For most guys, you feel that extra juice when you play against a team that you played on. I think it's even more so with KD because of his history with that franchise."

The blood was bad for much of the evening, and the game was good -- initially.

In the end, Oklahoma City was overwhelmed by Durant at his most dominant. Having scored 39 the first time he faced his old, scorned team, he continued the pain, this time scoring 40 on a mere 16 shots.

Durant started eagerly, but the zeal quickly turned into two early fouls and a first-quarter benching. Kerr decided against playing it safe, though, and put Durant back in with two minutes remaining in the first quarter.

The move paid off. Unfazed by early foul trouble, Durant proceeded to play incredibly. He sank a midrange attempt, followed by a runner.

To the Thunder's credit, they rose to this occasion, at least for a half. Out-manned, they managed to make a second-quarter run with such luminaries as Alex Abrines and Kyle Singler playing together. Enes Kanter (22 points) threw JaVale McGee for such a loop that Kerr yanked the bouncy big man until garbage time.

Pachulia glared downward as Westbrook was on his stomach, grabbing his face. Teammates did not exactly rush to their superstar's aid, which might have something to do with Westbrook's storming to the bench as the play was reviewed. It was eventually ruled a flagrant 1.

What looked like the beginning of some drama was actually the beginning of the end for OKC. The Warriors were too good after starting the second half, not ceding a turnover in the third quarter. Durant claimed 13 points in the quarter and was greeted with enormous applause as he went to the bench.

Durant was wonderful, but unlike his former teammate in the other jersey, he had significant help Wednesday.

Curry played an excellent floor game (24 points, eight assists), and Green was ubiquitous with his impact (12 points, 11 rebounds, 5 assists, 3 blocks). Klay Thompson, who flew to the arena after visiting his ill grandfather, was understandably off his mark, but he came back online as the game progressed. The Warriors got a good push from savvy bench vets West and Andre Iguodala.

In other words, Durant didn't need to be amazing for his team to pull away.

Lacking Steven Adams, Westbrook had to mostly go it alone. The contrast in talent was reflected in the playing styles.

According to ESPN Stats & Information research, there were 18 plays Wednesday in which Westbrook brought the ball up half court without passing to a teammate. The Warriors as a team had 10 such plays. On those plays, Westbrook shot 5-of-12 (10 contested) with four turnovers and two fouls drawn.

The collective Golden State effort squelched any chance of Westbrook's making the fourth quarter dramatic. Instead, fireworks were launched postgame.

When asked about Pachulia, Westbrook said, "I'm going to get his ass back. Straight up."

Perhaps more Durant heroics will be required when the teams face off Feb. 11 in what will be Oklahoma City's less-than-friendly confines. But for now, on the Oracle floor, this is a rivalry that hasn't matched the hype.

For now, the Warriors are literally and metaphorically looking down at this particular foe.