GREEN BAY, Wis. -- On a winter night in Mount Pleasant, Michigan, Matt LaFleur and Robert Saleh thought they were invited to a party at the home of their boss, Central Michigan University football coach Brian Kelly.

"We shoveled the snow and parked all the cars," Saleh said. "Then, at the end of the night, we had to go get the cars again."

And then they went back to the tiny apartment they shared as graduate assistants and stood around their kitchen table -- the one without any chairs.

"We decided that when we’re in that position, we’re never going to treat people the way we got treated," said Saleh, now the San Francisco 49ers defensive coordinator. "And Matty’s lived up to it."

And Saleh’s not surprised.

Nor is he shocked that 15 years later, the best man at his wedding landed the Green Bay Packers' head-coaching job last week. At age 39, LaFleur became the first Packers head coach under the age of 40 since Curly Lambeau coached the team in 1921 at age 23.

The story of LaFleur’s rise isn’t merely how he got one of the most coveted jobs in sports, but rather how he got to the NFL in the first place.

From Ashland to the NFL

It was Saleh who opened the NFL door for LaFleur, who went from grad assistant at Central Michigan (2004-05) to part-time quarterbacks/receivers coach at Northern Michigan (2006) to offensive coordinator at Division II Ashland University (2007).

"Basically, he’d only been a full-time college coach with me for a year, and I’m getting a call from the Houston Texans head coach (Gary Kubiak) saying he wants him to be an intern with offensive coordinator Kyle Shanahan," Ashland coach Lee Owens recalled.

"I’m thinking, ‘Damn, that’s a nice jump.’ I was still a little upset he was leaving after a year, but I guess I can justify that," Owens added with a chuckle. "He’s always been a man on a mission with unbelievable focus and ambition. But he produces everywhere he’s been. He’s really a bright guy, good at what he does, an unbelievable communicator and engages players -- particularly quarterbacks -- in a very unique manner."

Saleh and LaFleur embarked on separate career journeys after CMU. Saleh reached the NFL first as a quality control defensive assistant with the Texans in 2005. He kept telling LaFleur he should attend the NFL scouting combine in Indianapolis, where he could make contacts with other coaches in the league. Two years later, when the Texans played the Browns in Cleveland, LaFleur made the short drive from Ashland to attend the game as Saleh’s guest.

"He’s like, ‘Hey, come up, I’ll introduce you to some of the guys,’" LaFleur said. "I did that. I went to the combine, met some guys and went up to Cleveland and met them again. So I started to become somewhat of a familiar face."

Later that year, Texans offensive coordinator Mike Sherman, the former Packers coach, took the Texas A&M job and brought one of the Texans’ offensive quality control coaches with him. That’s when Saleh once again brought up LaFleur’s name.

"All of a sudden I got a phone call from Gary Kubiak," LaFleur said. "I’m like, ‘Hey man, heck of a job, Rob.’ So the rest is history. I accepted the job and I drove down to Houston the next day."

Little did LaFleur know at the time, but Saleh’s first thought was to go for that job himself.

"I wanted to go to the other side of the ball," Saleh said. "I played tight end [at Northern Michigan] and was like ‘This is my chance to get to the offensive side of the ball.’"

His mind, however, wandered back to that snowy day in Michigan and everything that his good friend had been through.

"I thought about it, I said, ‘Shoot, I can get Matty in here,’" Saleh said. "So I decided to not go to the offensive side of the ball and I went in and told Kyle, ‘This guy’s unbelievable. He’ll be awesome. Just stop looking.’ I guess I sold him well enough. Him and Coach Kubiak hired him."

That’s when Shanahan entered the picture. 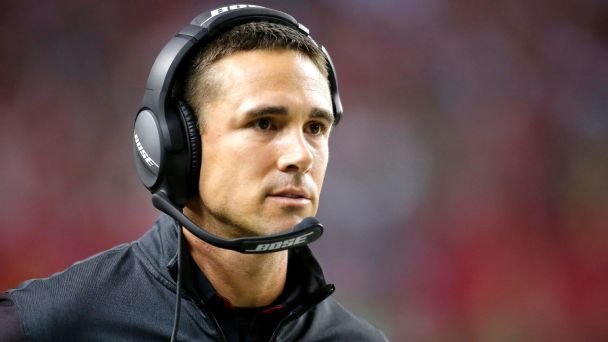 The son of accomplished NFL coach Mike Shanahan, Kyle took in LaFleur and taught him the offense. LaFleur’s job in Houston was to hand-draw the Shanahan offense, play by play.

"He was the run-drawer the first year I was the coordinator," Shanahan said. "Then the second year he drew the passes for me."

Then Shanahan went to the Redskins in 2010, where his father had just been named head coach.

"I knew I was going to bring Matt because he was my guy," Kyle Shanahan said. "I didn’t know whether it was going to be as a quality control coach or a quarterbacks coach, and then as I thought about it, I ended up making him the quarterbacks coach. He was that for four years. The first couple of years, I was more involved but then quickly turned it over to him. And he was awesome there.

"And then after that, after we all got fired, he went to Notre Dame for a year, I went to Cleveland. It was really my only year without him. Once I got out of there and went to Atlanta, I knew I was going to bring him back right away."

LaFleur worked as Matt Ryan’s quarterbacks coach for two years in Atlanta until Sean McVay, who worked with him in Washington, became the Rams' head coach. McVay brought LaFleur to Los Angeles as his offensive coordinator in 2017.

Together, they helped turn Jared Goff into a playoff-caliber quarterback. After just one season, LaFleur went to the Titans, who gave him the opportunity to call plays, which McVay did with the Rams.

It was a risky move to break from the Shanahan-McVay coaching tree.

"I thought it was an awesome move," said Kyle Shanahan, the 49ers' head coach. "I thought it was something that was big for him. Is your only goal in coaching just to get a head-coaching job or do you want to be the best you can when you get that opportunity? I always thought Matt would get an opportunity whether it was at 39 or it was at 50. But the key is to be as good as you can be when you get that.

When LaFleur left Ashland, he made barely $30,000. Owens helped LaFleur’s wife, BreAnne, land a job in her field of physical therapy. Of course, that seemed like a life of luxury compared to the sparse apartment he once shared with Saleh.

"There was no furniture, just our beds and a table but no chairs," he said. "We had this table that we picked up from Goodwill and in hindsight we should’ve bought the chairs, too. But we pretty much ate standing up."

Now LaFleur has a seat at the head of the table in Green Bay, where he’ll never have to shovel anyone else’s snow.