GREEN BAY, Wis. -- The selection of Jordan Love in the 2020 NFL draft signified that the end of the Aaron Rodgers era with the Green Bay Packers might come sooner than anyone -- including the two-time NFL MVP -- figured. Then, when Rodgers' team ignored the perceived receiver need in a record draft at the position, it suggested a concerted change to the offense.

These are not Rodgers' Packers anymore.

They're Matt LaFleur's -- at least in terms of how the second-year coach wants to play.

LaFleur watched his friend and mentor, San Francisco 49ers coach Kyle Shanahan, demolish the Packers in the NFC Championship Game with an offensive plan that featured 42 runs and just eight passes. If LaFleur needed a reminder that perhaps he strayed too far from his roots in his rookie season as head coach, that was it.

"I think Matt certainly wants to the run the ball," Packers general manager Brian Gutekunst said following Day 2 of the draft on Friday. "I think he's talked to you guys repeatedly about how much he'd like to run the ball and have the pass work off of that."

A 42-8 run-pass ratio is an extreme that LaFleur isn't likely to resort to, so long as Rodgers remains at least as effective as he was last season, with a 26-touchdown, four-interception performance in a 13-3 regular season during which nearly every possible break (from injuries to scheduling) went in his team's favor. But anyone who listened closely to LaFleur from the day he was hired should know how much he values the run.

"I think anytime you can take as much off the quarterback as possible, that only helps them out in the long run," LaFleur said in one of his first interviews in Green Bay.

Even if the Packers believe Rodgers' decline has begun, it's hard to imagine them going to the 49ers' extreme, given the still obvious ability gap between Jimmy Garoppolo and Rodgers.

The decision to take the first shot at finding Rodgers' eventual successor brought up a whole list of questions on its own, but if Gutekunst believes that Love is the one to provide another decade-plus of stability at the most critical position in the game, then he had to make that move and live with the fact that it could accelerate the end of Rodgers' time with the team. (However, it is worth wondering, if this is the long-term plan, why the Packers signed Rodgers in August 2018 to that $134 million contract extension that runs through 2023.)

Perhaps Gutekunst's receiver board really didn't fall in such a way that he could justify reaching for a receiver with his Day 2 picks at Nos. 62 and 94 (AJ Dillon, a bruising running back, and Josiah Deguara, a tight end who looks more like an H-back). Plus, without the fourth-round pick the team used to move up from 30 to 26 for Love, it might have been impossible to move up in the second or third rounds.

Or maybe Gutekunst didn't view receiver as a major concern the way those on the outside did because he knew of LaFleur's desire to further shift from past Packers offensive trends.

"I think it's a little bit the way everything kind of fell early in the draft," Gutekunst said of the receiver board. "Just didn't work out that we weren't able to select some of the guys that we had rated really highly. And once we got to the middle and toward the end of the draft, I just didn't think there was great opportunity to add a player that was going to make an impact on our roster this year."

That led Gutekunst to Boston College's bruising, between-the-tackles running back, Dillon, in the second round and hybrid tight end/fullback Deguara of Cincinnati in the third.

"Matt really wants to tie everything to the run game and off the run game, and these guys will help us do that," Gutekunst said.

Last season, LaFleur found a way to blend some of what Rodgers liked from former coach Mike McCarthy's offense with his system, but it wasn't completely LaFleur's system.

Jordan Love talked with Aaron Rodgers after being selected by Packers

Jordan Love describes his emotions one day after being taken by the Packers and what he talked about with Aaron Rodgers.

"I think as we've gone through a full season, we have a much better idea of who we are, of what we do well, and now it's on us to put that plan in place," LaFleur said after the draft. "If I look back at our Day 1 install from last season to our Day 1 install that is approaching this offseason, it's night and day different. We have a better identity of who we are."

Love was picked for the long term, and the same could be said about Dillon if the Packers don't plan to re-sign Aaron Jones. Jones accounted for more than 1,500 yards from scrimmage and 19 touchdowns last season, and LaFleur will no doubt use him as much as possible again this season, therefore limiting Dillon's role immediately. The Packers also have Jamaal Williams, who is entering the final year of his contract.

Dillon, however, gives the Packers a bruising back to complement Jones' explosive style. The 6-foot, 247-pound Dillon showed rare athleticism for his size with a 4.53 40-yard dash and 41-inch vertical, the highest among backs who tested at the combine.

"You don't hear those numbers come around too often," said Packers scout Mike Owen, who covers the Northeast. "I had a chance to scout the guy for the Giants right now, Saquon [Barkley], with those kinds of numbers. Now we got AJ Dillon here with impressive numbers also. It's just God-gifted ability that blessed them with height, weight, speed and athleticism to do that. A lot of people in America wish they had that kind of traits."

The Packers let fullback Danny Vitale leave in free agency for the Patriots. Some envisioned Vitale filling the role that Kyle Juszczyk does for Shanahan in San Francisco, but LaFleur put him on the field for only 170 snaps in 15 games. Deguara might be a better fit for that kind of role. 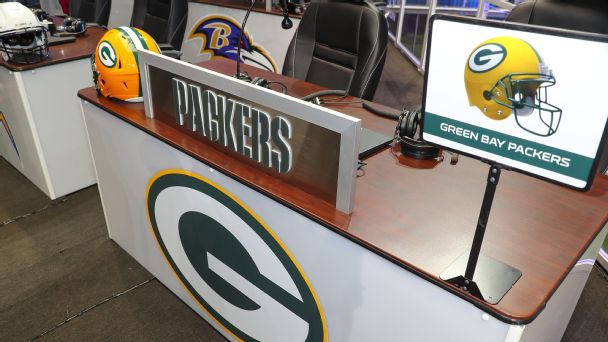 "There really wasn't a position that I didn't play on offense," said the 6-foot-2, 242-pound Deguara, who ran a 4.72 40. "I played a little slot receiver. I played a little in-line tight end. I was off the ball. I was in the backfield. I did a lot of different things, and I think that helped me a lot throughout this process, and I think it shows my versatility in this game."

This might go down as one of the most unpopular drafts in recent Packers history, at least in real time. Even when Gutekunst's predecessor and mentor, Ted Thompson, picked Rodgers in 2005, it was understandable because Rodgers was viewed as a potential No. 1 overall pick, and Favre was waffling about retirement. This time around, Gutekunst has a team that came within a game of the Super Bowl, despite the lack of weapons for Rodgers. Gutekunst added only one receiver, Devin Funchess on a prove-it ($2.5 million) deal, essentially swapping him for Geronimo Allison, who signed with the Lions.

"It's funny the reaction, especially to the draft and free agency," Gutekunst said. "I saw Ted for years. People were just all over him about the drafts and free agency. Really what matters to me is the team we put out there each fall and how they do. That's what I'm most concerned with."