HOUSTON -- What started as a simple message turned into $41.6 million.

"I'm sitting here watching the news and checking the Internet and seeing everything that's going on with Hurricane Harvey and the damage it's causing back home," Houston Texans defensive lineman J.J. Watt said in a video he posted to Instagram on Aug. 27, 2017, from his hotel room in Dallas. "It's very difficult.

So he made a request.

"Whatever you can donate, please donate to help these people out."

For the next three weeks, the online fundraiser continued to grow. Even after the original $37 million was raised, donations came in after the deadline to make a total of $41.6 million, making it the largest crowd-sourced fundraiser in history. A year later, the money distributed by Watt to help the relief efforts has made a huge impact on the lives of those who received help.

"We go to some of the areas where we've rebuilt houses and we go and visit a house and I talked to one family, and I was looking at the houses around them that were still pretty beaten up," Watt said. "They were like, 'We haven't seen those people since.' A lot of people literally abandoned their house, whether they went somewhere else or -- so, I think that while if you look at everyday life for most people, you may say, 'Yeah, they're in working, regular order,' but I think there's still a lot of people going through a lot of stuff."

More than $30 million of the money was split up to benefit four organizations -- Americares, Feeding America, SBP and Save the Children -- and was designated to be spent over the next 18 to 24 months. Watt spoke with people who handled donations after Hurricane Katrina hit New Orleans to see what they did well and what mistakes they made and said he made it his mission "to ensure this money makes as large of an impact as possible" and that "the entirety of the funds would be utilized here in Houston and the surrounding areas for those who were affected most by Hurricane Harvey."

Watt arrived at Covenant House on a Tuesday in December, alone. As he got out of his truck and walked into the space used to house homeless youth, he was quickly spotted. 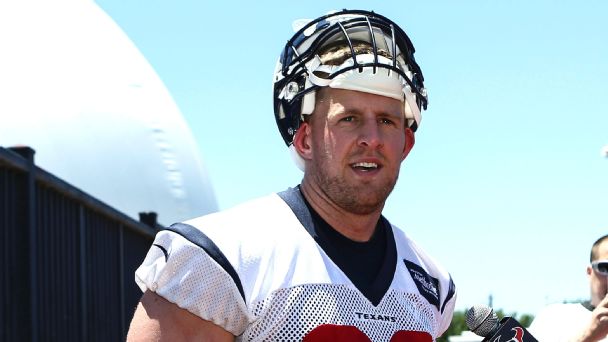 On the anniversary of Hurricane Harvey, we look back at the impact of the storm and J.J. Watt's philanthropy:
• How $37M will help Harvey victims
• Harvey evokes memories of Katrina
• Players hate handling Harvey from afar
• Watt's impact will have lasting effect

"It took [the youth] just a few seconds to go, 'Oh my gosh, this is J.J. Watt that just walked in,'" Covenant House's executive director Leslie Bourne said. "And they were overjoyed with him. He spent so much time individually in talking with a lot of the youth. He's really just a genuine person, and that comes out very much when you first meet him."

Covenant House, which is just one of the organizations funded by the money given by Americares as part of what was raised by Watt last year, is in its 36th year serving as a shelter and a comprehensive provider of services for homeless youth (ages 18-24) and their children.

Watt stayed for more than an hour, talking to the young adults, taking photos, and seeing the damage that had been done by Harvey. He stood by what had been a nursery, which had an exterior wall that had to be replaced because of storm damage. And he toured a wing of the Crisis Center that had been quickly repaired, in part because of the money he raised.

The money Watt raised has had a lasting effect on Houston and the surrounding areas affected by the storm, which was the deadliest hurricane to hit the United States since Hurricane Sandy in 2012. Harvey flooded more than 300,000 structures and was directly responsible for at least 68 deaths.

Shelter from the storm

One of the people aided by the money donated to Covenant House through Americares is Eric, a then-19-year-old father of two living in Sugar Land, Texas, when the hurricane hit. As the water rose, Eric, his girlfriend and her kids, ages 1 and 2, had to be evacuated by the Coast Guard on a large military vehicle to a shelter at Fulshear High School, more than 20 miles from Sugar Land.

Eric and his family stayed in the shelter for two weeks. After that, they became nomads, paying for hotels or rooms wherever they could find somewhere to stay. It was at one of these stops that Eric was robbed. Without any money to pay for a hotel, he turned to Covenant House.

"Especially when you're a young parent, having to relocate, find shelter ... it's a heavy weight on your shoulders to do that all by yourself," Eric said. "They really accepted me and my family with open arms. I really can't even thank them enough.

"They sheltered us from the storm. Not Hurricane Harvey the storm, but the storm of everyday life. When you don't have anybody to depend on, I knew I could depend on them here."

In part because of the funding raised by Watt, Eric had a safe place for his children.

"Without that I probably wouldn't be here, and I feel like I'm making a step in a positive direction from that. I couldn't thank him enough," Eric said. "I can nurture them here. We can color, read books and everything. It's a surreal feeling actually just being here, knowing that this is a place for my kids ... to love on them."

'A place to call home'

John, 21, found his way to Covenant House immediately after Harvey struck. The morning after the storm first hit, he went to the nearest freeway to get as high up as he could. John had stayed at Covenant House before, and after losing everything during Harvey, he knew where he could turn for help.

"Covenant House has given me a place to call home and basically a family to call family," John said. "Coming back to Covenant House, everything was better. We're a family here, so basically having family around makes me feel like everything will get better."

Along with housing, Covenant House offers services to help youth get back on their feet with education and career planning.

"At first I didn't take life seriously, but Covenant House has prepared me to be out on my own and get my own place and keep my job."

Covenant House kept its doors open during the storm, offering shelter to anyone who needed it. Immediately after Harvey hit, the shelter saw almost a 20 percent increase in homeless youth seeking assistance. The shelter serves an average of 90 young people every night on its Houston campus, located in the Montrose neighborhood, and has a strong street outreach program that has been directly impacted by the money Watt raised.

"There's still homeless [people] out there," Bourne said. "We see them on our street outreach program. I think we found 18 of them in July. As people are trying to get back in their homes or they're still waiting on repair money for their homes, there's still fallout a lot of times for that older youth that hasn't transitioned out of the family. So we're still prepared to take them in for the next year or so.

"Some people are starting to move into their homes, but it's still not over. So we're still expecting youth needing our services from the hurricane."

At the end of November, Watt had the chance to see some of the work being done in person with the money that was raised. It was the first time he was able to get to a site after spending the previous month and a half recovering from surgery after he broke his leg during Houston's Week 5 game.

"I went and saw a few of the homes that are being rebuilt by SBP after being completely gutted from floor to ceiling [and even the roof]," Watt wrote on Instagram. "The people and their stories were both heartbreaking and uplifting all at the same time. ... Each of these families went through so much devastation and heartbreak, yet remain so positive and energetic, it was truly inspiring to spend time with them today.

"The work that SBP is doing in rebuilding these houses and helping to get people back in their homes is incredible, and thanks to your donations they will be building hundreds of homes over the next two years, each with a story like those great folks and each eager to get back into the comfort and safety of their own home."

SBP was founded in 2006 by by Zack Rosenburg and Liz McCartney, who were living in Washington, D.C., at the time but volunteered at St. Bernard's Parish in Louisiana after Hurricane Katrina. They started SBP six months after Katrina hit Louisiana. Since then, the organization has rebuilt more than 1,500 homes, and it opened an office in Houston in September 2017 to help people get back in their houses after Harvey.

The grant Watt provided SBP was for $8.5 million. According to Cli Roberts, the executive director of SBP Houston, each house costs about $35,000 to repair, so $3.5 million is going toward rebuilding the first 100 homes in 2018. The other $5 million has been granted to other organizations that are also rebuilding houses across areas impacted by Harvey.

"It was incredible to see what J.J. Watt did by raising all of that money," Roberts said. "So many people believed in him and donated, and that was incredible for SBP to be a part of it and to be trusted with that money and be able to go out and rebuild homes. One of the biggest barriers to recovery is funding, so knowing that we have this funding through Year 1 was just really relieving, knowing that we can move over 100 families home this year."

SBP relies on volunteers to help rebuild homes. Colby Williams joined SBP because he has been here before. In 2005, he was living with his mother on Mandeville Street in Louisiana when Hurricane Katrina hit. Their home was too short, so they had to evacuate to his grandparents' house and use a sledgehammer to break into the attic, where he said they spent "hours on hours" waiting to be rescued.

"Ever since I was involved in the storm, I had gotten help from other people, and I just wanted to fill that role," Williams said. "I've always felt the need to help other people. And to be that support, that pillar for them to lean on."

Williams said he has always been a football fan and "a huge fan of J.J. Watt," but after seeing the time and effort Watt put into raising the money for those affected by Harvey, "it meant a lot."

"We were able to get new tools and we were able to fund a hundred homes because of the J.J. Watt funds," Williams said. "And now we have a fully stocked warehouse."

Much more to be done

Watt has been an important part of this Houston community since he was drafted No. 11 overall in 2011. His list of donations and charitable contributions is long and admirable, but there is no doubt -- even with the Hall of Fame-level of success he has had on the field -- that what he did in the aftermath of Hurricane Harvey a year ago will be his legacy in Houston.

Despite all of the work that has been done to restore Houston, a drive around the city reveals that there's much more to be done.

Although rebuilding Houston will take more time, there are tangible improvements and impacted lives that show exactly what the money Watt raised has done -- and will continue to do -- for Houston.