HOUSTON -- On Monday night in New Orleans, quarterback Deshaun Watson showed just how dangerous he and the Houston Texans offense can be when he led the Texans 75 yards in 13 seconds with his team trailing by six points with less than a minute left.

And on that touchdown pass, he showed how dangerous his playing style -- coupled with a lack of protection -- can be. 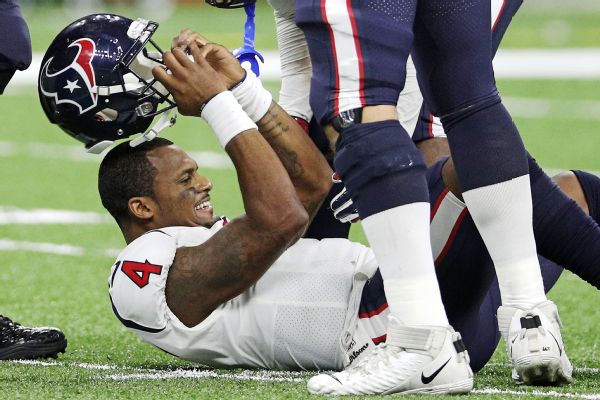 The play after Watson threw a 38-yard pass to DeAndre Hopkins with 50 seconds left, he tossed a 37-yard touchdown pass to Kenny Stills to put the Texans ahead by one after the extra point. Watson was hit hard as he threw the ball.

“I was on my back, on my side, and I kind of peeked and I saw him catch it,” Watson said.

Watson did everything he could to lead the Texans to a victory -- but after getting the ball back with 37 seconds left, the Saints advanced just far enough down the field to kick a 58-yard field goal to win 30-28. Although the Texans lost, Watson showed again that he is capable of putting a team on his back and in a position to win.

"The throw he made to Kenny [Stills] at the end of the game there, the touchdown throw, is really kind of what it's all about, being a great quarterback in this league," Texans coach Bill O'Brien said. "To hang in there and take a hit and to deliver that ball with the accuracy that he delivered it -- that one play kind of says it all about the guy.

“When you have a guy like that, you have confidence in any play that you call that he's going to be able to make that play work."

When you have a quarterback like Watson, O’Brien said, “we are never out of it.”

“Even when things aren’t going so good, if we can keep things within range, we are in every game,” O’Brien said. “That is what Deshaun Watson gives us. He is a great football player.”

Watson accounted for all four of the Texans’ touchdowns, completing 20 of 30 passes for 268 yards, with three passing touchdowns and an interception. He also had four carries for 40 yards and a touchdown.

But Watson was hit 11 times and sacked a Week 1-high six times. He is coming off of a season in which he was sacked 62 times, which was the most in the NFL. Houston traded for left tackle Laremy Tunsil shortly before the start of the season, but the unit still struggled in the season opener.

Last season, Watson played in all 16 games, but he had to play through several serious injuries and in the middle of the season had to take a bus from Houston to Jacksonville, Florida, for a game against the Jaguars because of injuries to his lungs and ribs. Watson also has torn the ACL in both knees -- his left in college and his right during his rookie season.

If the Texans want to see this kind of performance from Watson all season -- and they might need to depend on it, given the way the defense played in the second half to blow a 14-3 lead -- they need to make sure Watson stays upright.

“He has a way of making plays work that you really wouldn't think the play would work ... but he keeps the play alive and sometimes that means he takes a hit," O'Brien said. "We have to try to find that fine line where maybe the ball can come out a little bit quicker [or] we can design a better play.

“At the end of the day, he took the hit on that touchdown to Stills ... and delivered a strike, and at that point and time that could've been a game-winning touchdown. He's going to take those types of hits sometimes just because of the way he plays. That's his playing style.”