JACKSONVILLE, Fla. -- Before the NFL draft, Laviska Shenault wanted to make sure NFL general managers understood who he is, what drives and motivates him, and showcase the kind of player he was at Colorado and what he could bring to an NFL team.

So he wrote a letter and published it in The Players' Tribune the day before the draft began. Toward the end, after the highlight clips, is a line that stands out: "I feel like I'm a combination of three different receivers -- Jarvis Landry, Julio Jones and Larry Fitzgerald."

Get To Know Shenault 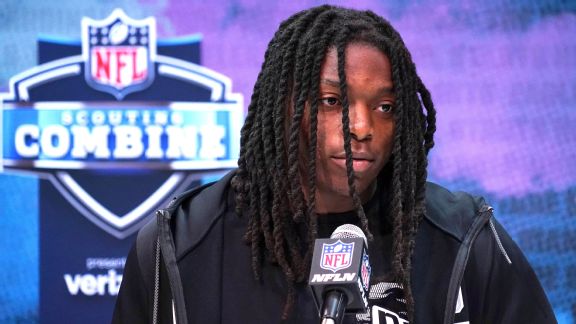 Before the rush to judge Shenault, the Jacksonville Jaguars' second-round draft pick, as arrogant, know that Shenault isn't saying he is as good as those three players. He’s saying he has traits of all three, traits that give him a chance to be an impact player.

The Jaguars certainly would be happy if Shenault turned out to be as good as any of those three. For now, though, they're just trying to figure out how best to use the former Colorado standout. Coach Doug Marrone's early thoughts are to do pretty much what the Colorado coaches did in Shenault's three seasons: put him everywhere.

Shenault lined out wide, in the slot, at tight end and in the backfield during his career. While he put up good numbers as a receiver (149 catches for 1,943 yards and 10 touchdowns), he also was pretty good as a ball carrier: 42 carries for 180 yards and seven TDs while averaging 6.7 yards per carry.

Some of that came on end-arounds, but Shenault also lined up as a running back, too -- and he sometimes did a pretty good imitation of Marshawn Lynch by lowering a shoulder and running through defenders. He did that receiver, too, which is one of the reasons the Jaguars have been high on him for two years.

"I saw him play live in his first game back this year against Oregon and so you see him in person and he looks like a linebacker," said Mark Ellenz, the Jaguars' director of college scouting. "And he's really good with this RAC, his run after catch, not only with burst and explosive speed, but he's a strong kid that can break tackles, so he blends a lot of things together."

Actually, a better physical comparison for Shenault might be Jaguars running back Leonard Fournette. Shenault measured 6-foot-1 and 227 pounds at the NFL combine, which makes him an inch taller and a pound lighter than Fournette's listing on the Jaguars' official roster.

They pretty much run the same way, too -- trying to go through defenders.

That means the Jaguars don't have to only have Shenault carry the ball on end-arounds or reverses. They can hand it to him as a traditional running back and Marrone even talked with new offensive coordinator Jay Gruden about using Shenault as a Wildcat QB.

He told Shenault the same thing after the Jaguars took him with the 42nd pick last Friday.

"You can put him in the backfield. He can play Wildcat," Marrone said. "You can put him as the F tight end. You can do a lot of things with him. You see it on his tape in 2018 and 2019. That's one of the things we looked at.

"We went back there and I said [to Shenault], 'Look, we can do all those things but the whole key is going to be how well you grasp it, how well you pick it up.' Because if he can, make no mistake about it, we want to be able to do those things."