CLEARWATER, Fla. -- Nobody uttered the magic word. Nobody ever did mouth the word "tanking" in Tony Clark's visit to the spring training camp of the Philadelphia Phillies on Monday.

The media asked a bunch of questions about how the Phillies (and other teams) are going about "rebuilding" these days, but not one of those questions included That Word. And the executive director of the MLB Players Association certainly wasn't going to drop it. You can bet your transcript of the Curt Flood decision on that.

So the "tank" was empty. And you know what? It's just as well.

"Tanking" has become such a toxic word in sports, it's probably more productive to talk about what's happening in baseball without using it. Because you know what happens when you do? People get defensive. That's what. Or angry. That, too.

So let's not go there. But are the Phillies putting together a team designed to contend this year? Of course not. Are four or five or six other particular teams? Of course not. And is that a problem for this sport? What do you think?

As Buster Olney and I have both written, the current system in this sport makes that an excellent strategy -- at least for the long haul. The Houston Astros could tell you all about it. The Chicago Cubs engaged in at least a variation of it. And you know what? Why wouldn't they?

I have friends who work as accountants. And every year, when the new tax laws are passed, accountants everywhere pore over those laws for ways to, well, strategize. For ways to use the system that's in place at any given moment and make it work for their clients.

There's nothing illegal or immoral about that. It's what you do. Or at least it's what they do. It's what anyone in their business would do. It's the way it works in this great, democratic nation of ours.

So if the Phillies or the Atlanta Braves, or the Cincinnati Reds or the Milwaukee Brewers are now doing what they need to do -- using the system that's now in place in baseball to their own best advantage -- then there's no reason to demonize them. And too much of the conversation about tanking, or whatever this is, has gone down that road. Which just distracts us from the real issue.

The real issue ought to center on the system itself. If the system in place in this sport -- because of the current draft rules, signing pools, international signing structure, etc. -- is creating incentives for teams to lose, then baseball needs to fix that.

And if that system is creating incentives for teams not just to lose but also to lose a lot, then baseball really, really needs to fix that.

And when it's your job to run sports' most powerful union, in a year when a new labor deal is being negotiated, then this is a huge topic. No matter what we all call it.

So Clark talked very carefully about that topic Monday morning. Because he has to talk carefully. Because labor negotiations haven't even started yet. Because nothing has been settled, and no issue has been resolved.

But if the current system creates incentives for franchises to avoid putting their best team on the field, "that's worthy of more dialogue," he said.

And if changes have to be made "to make sure that the entire industry keeps moving in the right direction in regards to competition, then we'll look to do that," he said.

And if a team in one of the biggest markets in America just pretty much sat out free agency, the union is going to make sure it understands all the forces behind why that's happening -- even though, in the Phillies' case, the team itself has made it clear that it views itself as following a model much like the Cubs did: No reason to spend now, but that will change.

"I think it's unfortunate that we're having the conversation, because I don't think it's good for the industry when you feel like some are trying and some aren't. But if that requires a tweak here or a tweak there ... then it may make sense to address it." 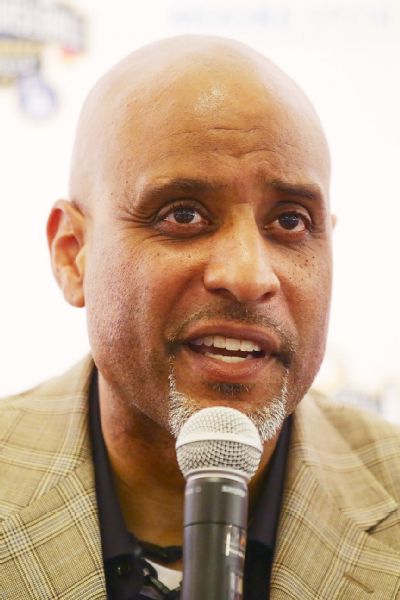 "We understand there are certain challenges, market to market," Clark said. "There are certain times when windows close, when you've made a heck of a run and you realize you may have to reboot a bit. We understand all that. But we also appreciate that certain markets need to act like certain markets. And it's in the best interests of the industry that they're navigated a certain way, so that the line keeps moving across the board."

But as we were saying, this isn't about the Phillies. And the topic at the bargaining table is unlikely to focus on any individual team. The topic is about the sport itself. And both parties need to decide if what they're seeing is just good old-fashioned rebuilding or something different. But let's just say a lot of people in the game don't even pretend this is rebuilding as we used to know it.

"It looks as if teams are making the decision they feel like they need to make, against the rules that are in place," said Clark, who clearly must have some accountant friends of his own.

So to compare what teams are doing in 2016 to the way teams rebuilt in previous eras is "not fair," he said, "if only for no other reason than the rules they may have been functioning under may have been a little bit different."

But if teams across the sport aren't even trying to win? Then that's a topic. Period.

"If that is the consensus, then I would think there are more conversations to have about why that's happening,” Clark said. "Hence, Bargaining Negotiations 101."

Regrettably, it's the conversation itself that's becoming a problem -- because it's not going away. And not just in the media, either. Among more people inside the sport than you might imagine.

"I think it's unfortunate that we're having the conversation, because I don't think it's good for the industry when you feel like some are trying and some aren't," Clark said. "But if that requires a tweak here or a tweak there ... then it may make sense to address it."

Which, of course, is another way of saying, in bargaining-ese: "We will address it." But how? That's the $9.5 billion question.

We don't know that answer yet. Could be a draft lottery. Could be restructured draft and international signing pools. Could be a rule that says you can't pick in the top five of the draft two years in a row.

Could be something totally innovative. Could be a variation on things that have worked in the past. But no one should pretend this topic is just a hallucination by a few knuckleheads in the media. This is a serious issue. And it will be coming soon to a bargaining table near you.

No matter what word you use -- or choose not to use -- to describe it.