What can Patrick Mahomes do for an encore in 2019?
364dAdam Teicher
Chiefs DL Jones hints at holdout if no new deal
5d
Are long field goals next frontier for the Chiefs' Harrison Butker?
7dAdam Teicher
How a search for family brought one NFL coach to a place he never expected
15dSarah Spain
Why Patrick Mahomes and Tyrann Mathieu got involved in Black Lives Matter
18dAdam Teicher
Chiefs, 49ers think familiarity might aid return to Super Bowl
24dAdam Teicher and Nick Wagoner
AFC West all-decade honors: Best player on each team, every position
18dNFL Nation
Chiefs' Mahomes determined to 'help the world'
25dAdam Teicher
Inside the decade's offensive, defensive trends for all 32 NFL teams
21dAaron Schatz
Jul 8, 2019

KANSAS CITY, Mo. -- Patrick Mahomes may not throw 50 touchdown passes and for more than 5,000 yards in 2019, one year after he became the second quarterback in NFL history to accomplish both feats in the same season.

But the Kansas City Chiefs still believe whatever they get from Mahomes will be considerable. What they saw from him last season, his first as a starter, convinced them of that.

"You knew it was inevitable, it was coming," Chiefs general manager Brett Veach said when asked whether Mahomes' debut season was at all a surprise. "I would say the thing that surprised me was the ease at which he did it, the consistency at which he did it. Even with the great players who are young, I think you always anticipate maybe [hitting] a wall. At some point after seven or eight weeks [opposing defenses] figure this kid out. They throw a couple of different looks, coverages or combinations that give him issues, but there was never really any issues. There was never really a time where that happened."

The Chiefs, hoping this season to reach the Super Bowl for the first time in 50 years, overhauled their defense during the offseason. They hired a mostly new defensive coaching staff, led by coordinator Steve Spagnuolo, and installed a 4-3 base defense. They acquired as many as seven new defensive starters, most notably end Frank Clark and safety Tyrann Mathieu.

But it's the offense, led by the league MVP in Mahomes, that will again have to lead the way if the Chiefs are going to win the championship. Can the third-year quarterback repeat last season's gaudy numbers? It has never been done in back-to-back seasons. Plus, the Chiefs are without star running back Kareem Hunt, who they released late last season after video surfaced showing him shoving and kicking a woman. They also may be without top wide receiver Tyreek Hill, who is suspended as the NFL investigates his possible involvement in a child abuse case.

Even without Hunt and possibly Hill, the Chiefs are expecting the product to be as good or better than it was last season, when they lost to the New England Patriots in overtime of the AFC Championship Game.

"We know that we are close and we have a pretty good team," Veach said. "We aren't trying to build for the future. We are trying to win now. We are going to stay aggressive."

They'll need growth from Mahomes, as good as he was last season, to get where they want to go. And he knows it.

"You have to improve yourself every single year," Mahomes said. "... As I go into this season, I know that I need to even step it up even more, how I take care of body, nutrition, but even the prehab and the rehab and all the different stuff that you have to do in order to keep yourself at that top-notch level when the end of the season comes."

Mahomes said he has started working on an offseason checklist to make himself better. He's looking at his mistakes from last season and trying to improve his footwork, especially in the pocket.

"I feel like at times last year I would get, I don't want to say lazy but basically lazy with how I was handling my feet in the pocket," Mahomes said. "It would disrupt timing on throws, so keep working on those things so they can be more and more consistent as I go on." 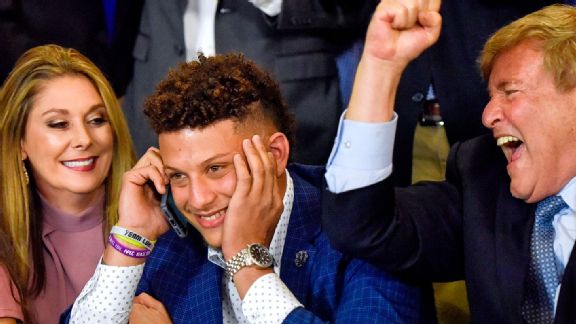 Drafting Patrick Mahomes: How the Chiefs outmaneuvered the NFL. Story

The Chiefs started practice this week, but began working on improvements last month when they gathered for the start of their offseason program. Offensive coordinator Eric Bieniemy and quarterbacks coach Mike Kafka began going through video with Mahomes from last season.

"He can look at every one of [last season's plays] and go, 'I can do this better right here,'" Reid said. "[Kafka] and [Bieniemy] have gone through all those and they'll be able to sit with him and go, 'What do you think here?' and then, 'This is what I think.' With that, growth takes place if you handle it the right way. He's wired the right way to handle that. He wants to be a great player and that's what you do. He's very open to things.

"It is a great growing period from Year 1 to Year 2. I think he has handled that the right way. A lot of guys don't. They get complacent. He won't do that.”

The Chiefs won their third straight AFC West championship last year but also broke through some playoff obstacles. They ended a six-game home postseason losing streak by beating the Indianapolis Colts in the divisional round at Arrowhead Stadium. That allowed them to advance to the AFC title game for the first time in 25 years.

They're expecting even more playoff obstacles to fall this year.

"You understand that the base-level expectation is last year plus improvement, and so that's a pretty high bar to get over," tackle Mitchell Schwartz said.

"That's the cool thing about this team and how we keep improving. You have a lot of guys who aren't satisfied with what they do and everyone is pretty competitive across the board and Patrick especially. He's harder on himself than anyone could ever be, so he's never going to be complacent and he's never going to feel like, 'Oh, I got this.' When you have that at that position it leads down to every other position."