ALAMEDA, Calif. -- Bruce Irvin saw Jon Gruden's quote from Sunday night, the one in which the Oakland Raiders coach talked about his team's pass-rushing fortunes in the wake of Khalil Mack being traded to the Chicago Bears.

"It's Arden Key's time," Gruden said of the rookie. "Bruce Irvin has to step up."

Irvin paused, and collected his thoughts.

Introducing, then, the new face of the Raiders' defense, a veteran with a streak as nasty as his disposition can be on the field, and with a massive chip on his shoulder he uses for fuel. Yes, Irvin, who was Robin to Mack's Batman the past two years, is as tired of being asked about Mack as he is ready for his close up, if you will.

Really, he has no choice.

And that's just the way he wants it. Especially as he embarks upon a position change from outside linebacker to defensive end and takes under his wing fellow defensive ends Key, a premier pass-rusher at LSU two years ago before off-the-field issues dropped his draft stock to the third round, Fadol Brown, who spent last season on the Raiders' practice squad as an undrafted rookie, and Shilique Calhoun, a third-round draft pick in 2016 who looks revitalized under Gruden and new defensive coordinator Paul Guenther.

Yes, Irvin is looking to carve his own niche and pick up where Mack left off.

"I'm excited, man," Irvin said. "I've got my young boys working with me, four days a week. Arden, Fadol and Shilique, we work out four days a week at 7 a.m. If one do it, we all going to do it. It's great, man. I'm looking forward to taking on the challenge and I think we're going to be pretty good."

Irvin, who signed with the Raiders as a free agent in 2016 after four years and a Super Bowl title with the Seattle Seahawks, has long been admired by Guenther, who wanted the Cincinnati Bengals to draft him out of West Virginia in 2012.

But Seattle, picking 15th, two selections ahead of the Bengals, called his name first.

"I just think his best gift is going forward," Guenther said of Irvin in training camp. "That's what he should be doing each and every down. So instead of playing linebacker, dropping off in coverage, we have to utilize, really his and everybody else's talents, to the best we can. Whether it's 10 snaps a game or 50 snaps a game, whatever it may be, that's kind of what we have here.

"We have a lot of different abilities on the defensive side and it's our job and my job as the coordinator to get these guys in the best position that you see with what they got." 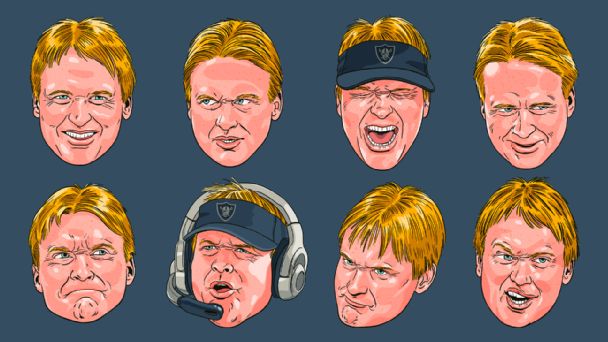 With 37 career sacks, Irvin matched his career high with eight sacks last season. He has 15 in two years with Oakland and has never missed a game. Racking up double-digit sacks may now be more than a mere goal for Irvin with Mack gone. It may be a necessity as he attacks opposing quarterbacks from their blind side.

"That stuff takes care of itself," Irvin said. "That's always my goal. At the end of the day, I've got a bunch of people counting on me; I've got a bunch of dudes looking up to me now so I just want to go out there and lead by example. Lead by my play. Lead by how I work during the week.

"All that other stuff will take care of itself."

Irvin, it should be noted, is represented by the same agent as Mack, Joel Segal. Mack signed a six-year, $141 million deal with $90 million guaranteed in Chicago after Saturday's trade. Irvin is making $8 million in base salary this season and is scheduled to make $9 million in base salary in 2019, the final season of his contract.

He turns 31 on Nov. 1, which should make him a shoe-in for a Gruden roster -- the Raiders have the oldest roster in the NFL with an average age of 27.4 -- but he is not thinking that far in the future.

Rather, Irvin is looking forward to making plays from his new position.

"It's more reacting, bro," Irvin said. "As a 'backer, I had to study routes during the week. Now that I'm at end, I just study my two left tackles, study the plays for the week. D-end is more a reaction thing than anything.

"It feels good just to be able to just react and run and just play football, man."

It is, after all, Bruce Irvin's time in Oakland.