HENDERSON, Nev. -- A year ago, the Las Vegas Raiders had an NFL-record six white-knuckle walk-off wins, won their final four regular-season games to finish 10-7 and forced their way into the playoffs despite finishing with a minus-65 point differential under interim coach Rich Bisaccia.

This season, after maintaining their roster core and upgrading at receiver and supposedly on defense and the coaching staff, the Raiders blew six second-half leads, losing a league-record five of those games. They lost four of their final five games, including three straight to close it out, to finish 6-11 and claim the No. 7 overall draft pick. This after being outscored by a combined 23 points while boasting perhaps as many as four first-team All-Pros in running back Josh Jacobs, receiver Davante Adams, defensive end Maxx Crosby and placekicker Daniel Carlson.

The difference? A steep learning curve that came with a new regime in coach Josh McDaniels and general manager Dave Ziegler, one that resulted in one head-scratching loss after another. One that also cost ninth-year quarterback Derek Carr -- who holds virtually every passing record in franchise history but also a career record of 63-79 and no playoff wins -- his job, as he was benched with two games to play. He stayed away from the team the final two weeks in a "mutual" decision, though the choice to move on from Carr seems fraught with financial concerns.

And therein lies the biggest question of the offseason for an underachieving Raiders team -- what do they do at quarterback? But it's not the only issue Las Vegas faces. The organization also has big decisions to make on Jacobs, who became the first Raiders player since Marcus Allen in 1985 to lead the NFL in rushing. They also might need to reimagine the offensive line again -- as tantalizing as throwing the ball to Adams, who led the NFL with 14 TD catches, might be, you think someone like Tom Brady would willingly sign up to play behind the current O-line? They also may need to fill massive holes on the defense. Again.

• The Kelce's road to the SB explained
• Will Raiders trade, release or keep Carr?
• How Olave pushed through 'rookie wall'
• Why Wilson's Jets career hasn't taken off
• Kellen Moore's plans for Justin Herbert

"That [quarterback] position obviously is paramount ... it will start with that, that's the process that we're getting ready to embark on," McDaniels said Monday. "And it will take us a little time because it needs to be thorough, and it deserves time.

"There's a lot that will go into that before we make any final proclamations or decisions. There's a lot of people that are going to need to do some evaluating here, watch a lot of tape, have a lot of discussions that are, hopefully, very fruitful. And then, when we're ready to go, we'll move on."

Jarrett Stidham, who has known only McDaniels' scheme in his pro career, impressed in his first NFL start, dicing up the NFL's No. 1-ranked defense to the tune of 365 passing yards and three TDs in an overtime loss to the San Francisco 49ers, but was brought back to Earth by the Kansas City Chiefs in the finale, getting sacked six times and throwing an interception. Hence names like pending free agents Brady and Jimmy Garoppolo, both of whom played with McDaniels in New England, being linked to the Raiders.

Stidham, who is set to be a free agent, said he had not yet thought about returning to compete for the starting gig.

"Do I feel like I am that type of caliber player in this league? Absolutely," he said after the season finale. "I just tried to be ready for my opportunity these last two weeks and try to take full advantage of it. That is all that I can do, that is all I can control. Like I said, I haven't really thought much about it, but we'll see going forward."

Las Vegas could also potentially be interested in drafting the likes of Kentucky's Will Levis, or with 11 total picks and an additional selection or two garnered in a trade involving Carr, could trade up to get Ohio State's C.J. Stroud or Alabama's Bryce Young, if either strikes the Raiders' fancy. Standing pat and taking Florida's Anthony Richardson might also make sense.

The Carr situation has to be on the front-burner, though, as $40 million of his contract becomes guaranteed three days after the Super Bowl, and trades cannot become official until the start of the new league year on March 15. An agreement would have to be in place with a trustworthy partner -- Carr also has a no-trade clause -- lest the Raiders be saddled with $40 million. Otherwise, Las Vegas could simply cut Carr with a relatively minimal $5.6 million salary cap hit before Feb. 15.

Meanwhile, Jacobs seems a more straightforward decision. Because after not having his fifth-year option picked up, Jacobs had a career year with a league-leading 1,653 rushing yards, 93 rushing first downs and 2,053 total scrimmage yards in being named to his second Pro Bowl.

Jacobs said he wants to return to Las Vegas -- "For me, it's got to make sense," he said -- and McDaniels, who was used to a running back-by-committee approach before being wowed by Jacobs, said he'd "love" to see the running back re-signed. Slapping a franchise tag estimated by OverTheCap.com to be $10.1 million on Jacobs would be a stop-gap measure for the No. 12-ranked offense in the league (No. 11 passing, No. 17 rushing and No. 12 scoring with 395 points).

Comeback seasons by former Pro Bowlers Hunter Renfrow (down from a career-high 103 catches in 2021 to a career-low 36 receptions in 2022) and Darren Waller (the tight end has a combined 83 catches and five TDs the last two seasons after going for 107 receptions and nine scores in 2020) would also help reverse another curious trend.

Consider: the Raiders played 13 one-score games this season, losing nine of them. Reverse that 4-9 record to 9-4 and the Raiders would have gone 11-6 and spent this week preparing for the playoffs. 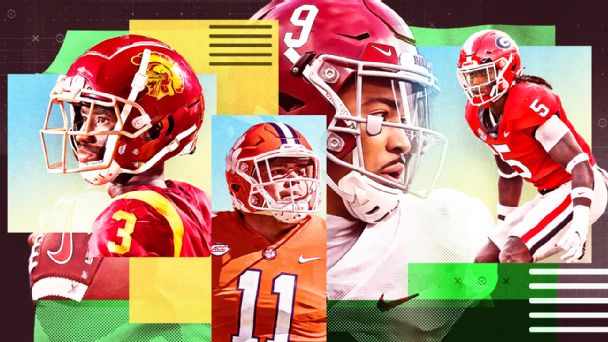 With an abundance of draft picks, $34.6 million in cap space and saving $40 million on Carr's contract, the Raiders could focus primarily on defense to help out Crosby, who had a career-high 12.5 sacks and led NFL defensive linemen with 22 tackles for a loss, and reverse the one-score game trend.

"That's the tough part; there's so many close games," Crosby said. "Last year we won a ton of those games and this year it didn't go our way. But I don't think we're as far [away] as some of the people think. At the end of the day, we have to learn how to win. As a team, we have to be more consistent. [There] can't be as many lulls in the game ... that just starts with the standard."

More decisions will need to be made on defense. Middle linebacker Denzel Perryman, a Pro Bowler in 2021 who missed the final two-plus games this past season with a dislocated left shoulder, will be a free agent. The Raiders will also evaluate how much edge rusher Chandler Jones -- who had 3 of his 4.5 sacks in one game and also missed the last two-plus games with a left elbow injury -- has left in the tank.

Crosby said he has faith in McDaniels and Ziegler to boost a No. 28-ranked defense in the NFL that had a league-low 13 takeaways, including an NFL-worst six interceptions.

They have an offseason to find out.