INGLEWOOD, Calif -- Los Angeles Chargers Chairman Dean Spanos looked north at the stands being erected on the new, $2.6 billion stadium that will house his team and the Los Angeles Rams, imagining what it will be like on game days.

"Most of this stadium is going to be digitized," Spanos said. "So we're going to be able to, in simple terms, flip and switch and make it really Chargers oriented. We're not to that point right now, but that's our goal. That's what we're going to do. So when the fans come in, it's going to be blue, white and gold."

With the stadium about 25 percent complete, Spanos was recently joined by a contingent of Chargers brass that included president of football operations John Spanos, chief financial officer Jeanne Bonk and special advisor Jeffrey Pollack to take a look at the project's progress.

Spanos has been on site a handful of times. The stadium remains on time for a scheduled summer 2020 completion.

The deal: The Chargers have a tenant-lease agreement with Rams owner Stan Kroenke's development group that lowers the team's risk because they do not have to borrow money for construction of the $2.6 billion project, and are not on the hook for any cost overruns. The Rams and Chargers will jointly share revenue such as naming rights, suites, sponsors and advertising. The teams will be on their own to sell season tickets and personal seat licenses (PSLs). The Chargers and Rams will separately sell PSLs, projected to raise $700 to $800 million toward construction costs for the new facility. Sales from stadium naming rights and $400 million combined in stadium loans from the NFL's G4 program also will go toward funding of the project. 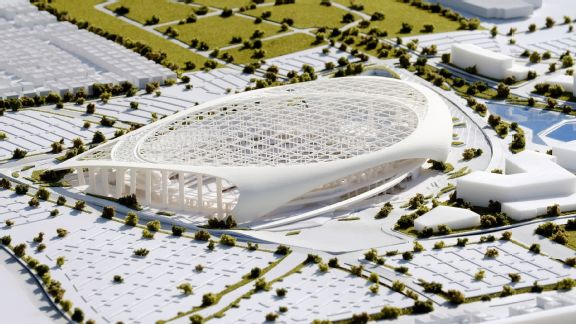 The 70,000-seat, open-air facility that will be shared by the Rams and the Chargers in Inglewood is the centerpiece of a $2.6 billion, 298-acre development.

• Rams, Chargers' new home named SoFi Stadium
• Chargers' Dean Spanos: 'It's like a city being built right in front of you'

PSLs on sale soon: The stadium will feature 275 luxury suites -- 125 of which went on sale last August -- more than 16,000 premium seats and almost three million square feet of usable space. Chris Hibbs, chief revenue officer and general manager for this project, said they're close to offering PSL sales, and that each team will have their own program. Season-ticket holders for both teams will have the first right to buy PSLs. Hibbs said the only thing available right now for purchase are joint suites for both teams. Fans cannot buy an individual suite for their team. At some point they might sell individual suites for a particular team, but they are not available for purchase as it stands now. Hibbs said some suites sales include other events outside of football, while others give customers the rights to buy into them. You can learn more about that here.

The project: The stadium project includes four main components, with a translucent, single-pane roof that covers three of the four elements involved in the project. The stadium will have a seating capacity of 70,000, expandable up to 100,000 for special events, including Super Bowls. Inside, the stadium will prominently feature the Oculus -- a circular, two-sided video board that's 162,000 square feet. A 6,000-seat performance venue will open in 2020 at the same time as the stadium. The multi-purpose venue will be used for shows, concerts and events. In between the stadium and performance venue is Champions Plaza, an outdoor venue that can be used in conjunction with the stadium and the performance venue.

The big dig: Construction workers had to dig a 100-feet deep hole in the ground -- the equivalent of a 10-story building -- to house the stadium because of the projects' proximity to Los Angeles International Airport, so that it doesn't interfere with plane radar. About 6.1 million cubic yards of dirt was moved from the spot where the stadium was built. All of that dirt has been repurposed and kept on site.

Hello down there: The stadium is two miles from LAX. About 40 million people look down on the Inglewood Stadium site yearly as the fly over it.

Big events on the horizon: Along with serving as the home field for the Rams and Chargers, the new Inglewood Stadium will be used for year-round events for sports and entertainment and will host Super Bowl LVI in February 2022, the College Football Playoff National Championship game in 2023 and the 2028 Opening & Closing Ceremonies of Olympic Games.