COSTA MESA, Calif. -- Since moving to L.A. over a year ago, Los Angeles Chargers running back Melvin Gordon has described a case of mistaken identity with another back who wears dreadlocks -- Los Angeles Rams tailback Todd Gurley.

"I don't like to get confused with anybody, but it is what it is," Gordon said. "People just see the dreads and go, 'Oh, it's Todd!'"

Gordon acknowledged that he and Gurley do not look alike. 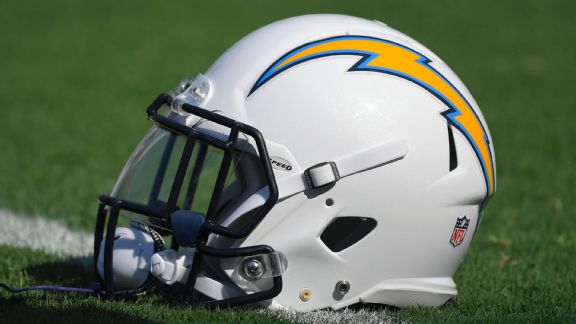 Adam Schefter talks to Chargers RB Melvin Gordon about his expectations for the 2018 season, the resurgence at the running back position, comparisons to Todd Gurley & more Listen

During a conversation with Adam Schefter on his ESPN podcast last week, Gordon said that he got into an argument with a Rams fans who did not believe he was not Gurley.

Asked after practice on Monday if he had ever been mistaken for Gordon, Gurley said with a chuckle, "Nah, never."

While Gordon does not like to be mistaken for Gurley around town, one area he would like to be similar to the Rams' running back is contract status. Gurley recently signed a four-year $57.5 million deal that includes $45 million in guaranteed money.

Gordon is scheduled to make $1.9 million in the fourth year of his rookie contract, with the Chargers picking up his fifth-year option for $5.6 million in 2019.

"You could call me Todd all day, for real," joked Gordon, when asked by Schefter about Gurley's contract.

Asked about the possibility of new deal, Gordon told Schefter on the podcast that his focus is on football.

"You can't really think about it," Gordon said. "It is what it is, and you kind of just have to let it come. If you think about it too much, it can mess up your game. Right now, I'm just focused on me and the team, really, and doing what we need to do."

Gordon and Gurley were part of the same 2015 draft class. The Rams selected Gurley at No. 10 overall, while the Chargers gave up their first- and fourth-round selections in the 2015 draft and a fifth-rounder in 2016 in order to move up two spots and take Gordon at No. 15.

Since they entered the league, Gurley is second in the NFL with 3,296 rushing yards, while Gordon is No. 8 with 2,743 rushing yards.

Heading into his fourth NFL season, Gordon said he's in good shape and ready to improve on his best season as a pro last year, in which he finished with 1,581 yards from scrimmage and 12 total touchdowns.

Chargers head coach Anthony Lynn has mentioned that he would like to find a complementary running back to share the workload with the Wisconsin product -- and second-year pro Austin Ekeler -- to help keep Gordon fresh for the backstretch of the 2018 season.

The Chargers selected Northwestern product Justin Jackson in the seventh round of this year's draft, and undrafted rookie Detrez Newsome was impressive in the preseason opener against the Arizona Cardinals last week.

However, Gordon said he has no problem being the workhorse back of the offense.

"I work extremely hard on my legs, just so when they get tired or exhausted, mine are still rolling," Gordon said. "My strength coach always told me the legs feed the wolf -- you go as far as your legs take you. So, I always feel like I work hard on my legs throughout the whole season just because I know it's going to carry me over that second half of the year."