CARSON, Calif. -- Neil Halbridge and his son Daniel sat in front of the 10-yard line, about 17 rows up from the StubHub Center's field, admiring their view. This was why the Orange County natives purchased season tickets for the Los Angeles Chargers when the team relocated from San Diego: the chance to get an up-close look at NFL football in an intimate, 27,000-seat setting.

"We're going to be one of the few people that are going to have this great memory of being in a smaller stadium -- you're really close, and there's not 100,000 people here," Neil Halbridge said. "And I think it's been really fun. It's been a neat experience."

In the midst of the NFL building supersized stadiums, Chargers fans have been given the unique opportunity to watch professional football with better sight lines. The team is spending three seasons in a stadium that was set up for soccer.

But man, was there A LOT of red out there!

I saw you Fam, out there, intermixed among the sea of red.#BuildChampionshipsNotTouristAttractions#FightForEachOther because we're all we got!

And that's where opposing fans have been gobbling them up; it has led to a home-field disadvantage at times, with opponent colors taking over the stadium.

That very well could be the case again on Sunday, when the Oakland Raiders visit. The Chargers piped in crowd noise at practice this week in preparation for a rowdy, pro-Raiders crowd. 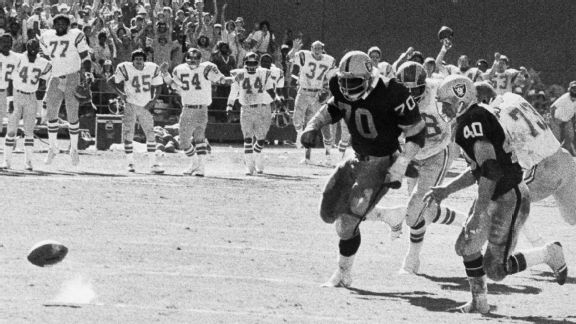 Forty years after the game between the Raiders and Chargers, the Holy Roller is still a "zany, unbelievable, absolutely impossible dream of a play." Read here

The Chargers sold out all but one of their home games last season (the Buffalo Bills game was 200 short of a sellout), and they have sold out both home games so far this season.

However, the Bolts decided not to expand the StubHub Center's 27,000-seat capacity this year. The Chargers wanted to keep the game-day experience comfortable for fans, including entering and exiting the stadium, along with movement inside the concourses and the use of restrooms.

"The word 'convenient' doesn't' get used a lot with sporting events, and it did with us last year," said A.G. Spanos, Chargers president of football operations.

It's clear with all the opposing fans who have swooped in to buy tickets that Los Angeles has not totally embraced the Chargers, though. Spanos said the team has to keep working on building a fan base in L.A.

"Obviously, we want the stadium filled with Chargers fans," Spanos said. "We're still new to Los Angeles, and the challenge is the same; we're still earning every fan's respect, and we've got to start by putting a good product on the field and making it a great experience."

Vice president of fan engagement Mark Tamar has been working on the experience, developing new entertainment zones around the concourses of the stadium this year, including a beer garden with a live band and a fun zone with food trucks and backyard games like cornhole.

"The smaller venue allows you to literally travel from one side of the stadium to the next," Tamar said. "So, we really focused on these interactive areas, creating festive areas so fans can come early."

That smaller footprint brings along a higher tailgating price, though. Fans who want to tailgate pay $100 for a parking space, compared to the $40 charged to park regularly.

It hasn't been a deterrent for longtime fans. San Diego and now Los Angeles Chargers season-ticket holder Brian Bahr said his group tried to bring a little piece of San Diego to L.A. with Thunder Alley, a pregame tailgating experience in which all Bolts fans are welcome.

"We can't wait to show fans that San Diego flavor that we bring into it, along with our counterparts in the Los Angeles area," Bahr said. "It's very important because it establishes a foundation in the area. There's a lot of shy Chargers fans out there because of the reporting and negativity that's been around. And at least they can see and go to a place where there's other Chargers fans, like I am.

"It doesn't matter what team you root for. We welcome everybody with open arms."

But even Bahr has been annoyed by the amount of opposing fans around him in his end zone seat on the south side of the stadium.

"It's frustrating to see the overwhelming results from the opposing team," Bahr said. "But at the same time, we conduct ourselves with good sportsmanship, so we get along with them. There's no animosity, but we still root for our players on the field."

We saw (and heard) you, Faithful. Way to represent on the road. 👏#GoNiners

The Chargers' brass point to the fair amount of Bolts fans who were willing to pay lower ticket prices to see their team play the Rams at Los Angeles Memorial Coliseum two weeks ago as evidence fans will fill the new Chargers home stadium in Inglewood if the price point is right.

"NFL games are a spectacle, right," Tamar said. "It's bigger than just the game itself; there's so much going [on] and so much hoopla that we're going to continue that over there. We just have to determine what the best locations are, how we handle it, and to make it really special for fans coming in."

While he has enjoyed the experience at StubHub Center, Neil Halbridge said he looks forward to watching the Chargers in the Inglewood stadium in two years.

"We once went to a Dallas [Cowboys] game, flew down and went to that stadium," he said. "And I've actually told people for years that you've got to go there once. It's an amazing experience.

"Just the things that they had before you get into the game, people could stay there the whole game because they had so much. So I just thought it was a really nice experience."

"You have to understand that this is a very intimate experience [at StubHub Center]," he said. "But the reality of the situation is being in a stadium this small, you have a disproportionate number of away fans that are at all these games -- not because there are Chargers fans that don't want to be here, but this ticket can be more valuable to sell to people that want to go on a nice vacation in L.A."