COSTA MESA, Calif. -- Philip Rivers is having one of his best seasons as a pro, and one of the best quarterbacks to ever play recently provided some analysis.

Peyton Manning provides a breakdown of Rivers' performance during the Los Angeles Chargers' 29-28, come-from-behind victory over the Kansas City Chiefs in Week 15.

The win ended the Chargers' nine-game losing streak to the Chiefs, and is the focus of the latest episode of the ESPN+ show Detail with Manning.

Rivers didn't play a clean game. He threw two interceptions early, which gave him eight interceptions in his past four games against the Chiefs.

But Manning gave Rivers credit for overcoming those early mistakes and making some clutch throws to end the game. 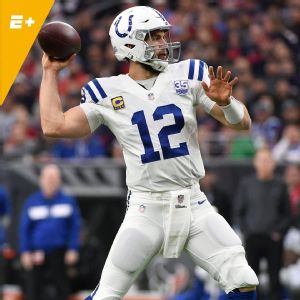 Manning points out that though Rivers' throwing motion is a bit unusual (at one point he compares a Rivers' release to former Kansas City Royals pitcher Dan Quisenberry), it works.

"I'm only going to talk about it once," Manning said. "Rivers has a different style than a lot of other quarterbacks, but the point is it doesn't matter: It works for him. It's effective, and he can make all of the throws."

Manning went on to say that every throwing motion is different, noting that his father Archie Manning and Ken Stabler were like Rivers, throwing with a three-quarter motion, while players like Johnny Unitas and Jim Kelly threw over the top.

Manning even continued his analogy to quarterbacks in the movies, noting that Shane Falco in "The Replacements" (played by Keanu Reeves) threw differently than in Reno Hightower (played by Kurt Russell) in "The Best of Times," or Seth Maxwell in "North Dallas Forty" (played by Mac Davis) threw it differently than Willie Beamen (played by Jamie Foxx) in "Any Given Sunday."

"I don't care how you throw it," Manning said. "Does the ball get there? Is it accurate? Do you make good decisions? Can you put good touch on the ball? Rivers can do all of those things."

Manning kind of chuckled at the fact that on the Chargers' fourth offensive play of the game, the Chiefs kept the backside end at home in case Rivers faked the handoff and kept it on the zone read.

Why would Chiefs outside linebacker Justin Houston stay home? Because Rivers actually kept the ball and ran it a week earlier against the Cincinnati Bengals, although he gained just 2 yards on the play.

"What I call that is a tendency breaker," Manning said. "Do it every four years if you want to, but just get it out there every now and then that Rivers will keep the ball. That keeps the defensive end honest."

Manning went on to say that he used to keep the ball every so often on a naked bootleg that would result in a big play, including this 33-yard touchdown run in 2001 against the Buffalo Bills while playing for the Indianapolis Colts.

I asked Chargers head coach Anthony Lynn if Rivers was any faster running the zone read in practice than in the game against the Bengals.

"No, about the same," Lynn chuckled.

Rivers has a total of 579 rushing yards in 15 seasons, so the 37-year-old signal caller isn't exactly Steve Young out there.

The final drive that led to the Chargers' victory was a microcosm of Rivers' NFL career.

It wasn't picture perfect, but Rivers completed passes in critical moments, including a great anticipatory throw to Travis Benjamin on fourth down to keep the drive alive.

He also showed toughness, taking a helmet-to-helmet hit from Kansas City linebacker Dorian O'Daniel that was not called.

But as Manning points out, it's really the final two plays of the game that show Rivers at his best.

On the touchdown with 4 seconds left, Rivers makes a precision, back shoulder throw on a fade route to Mike Williams, where only the big-bodied receiver can get to it.

Then, on the two-point conversion to win it, offensive coordinator Ken Whisenhunt brings back the same play the Chargers dialed up on the first touchdown of the game to Williams, flipping the formation to the right side. Whisenhunt also adds motion across the formation by Benjamin so the Chiefs don't detect it's the same play.

The motion causes confusion between Kansas City defensive backs Kendall Fuller and Orlando Scandrick, with both of them staying with Tyrell Williams and Mike Williams popping free for perhaps his easiest touchdown of his NFL career.

"Awesome job by Rivers executing a two-minute drill," Manning said. "A fourth-and-7, a two-point conversion to win it, with a hostile crowd against a division opponent. Awesome job. Merry Christmas."