SAN DIEGO -- The boxer peppers a heavy bag amidst the afternoon shadows, Isaac Rochell circles nearby, squats underneath a nearby window pane and angles to get the right lighting he wants for the next shot.

Rochell, a Los Angeles Chargers defensive end accustomed to bulling his way past offensive guards for a sack, works up a sweat finding the best shots of his subject on this sunny Saturday.

"This is especially difficult because I don't know much about boxing, so it's hard to even know what to look for," Rochell said, checking his camera. "When you're watching a fight, it's easy to watch it because you're just looking for someone to get knocked out or whatever it may be.

"But this," Rochell adds, pointing to his subject, drenched in sweat. "He's training and you have to find unique ways to find a shot that people would enjoy."

Entering his third NFL season, the Chargers' renaissance man is in pursuit of his latest hobby -- photography.

"Most of the guys from Notre Dame are seen as a little quirky in the league, but that's OK," former Chargers linebacker James Onwualu said about Rochell.

Here, Rochell is taking photographs of boxing for the first time. His subject? WBO junior-welterweight champ Maurice Hooker, who will defend his title on Saturday against southpaw Mikkel LesPierre at the Turning Stone Resort Casino in upstate New York.

Bringing in a record of 25-0-3, with 17 knockouts, Hooker predicts another knockout on Saturday.

While mostly serious during his three-hour workout, Hooker allowed for a little playful banter between he and fellow Roc Nation client Rochell after the training session, giving the football player a few tips in the ring.

Here's the video from what I did for Saturday when I took part in the @see.you.on.sunday movement.... also pretty sure @mauricemightymohooker would destroy in a fight... @rocnationsports

Rochell developed his interesting offseason hobby two years ago in Phoenix, looking for something to do during his down time while training for the draft.

"I basically had tons of time," Rochell said. "I got done training at 2 p.m. each day, so I wanted to choose something to do. I wanted a hobby to do so I wasn't just sitting at home."

Rochell said he bought a used Canon camera from a store, journeyed out to the stark Arizona desert landscapes and went to work.

"You can make it what you want, and it's a creative outlet," Rochell said of photography. "It's important, especially for athletes, to not just be doing athletics.

"I think it's important to exercise other parts of your brain. For me, it's photography. For somebody else, it might be music, but it allows me to kind of do what I want and be free doing a creative outlet."

Rochell said he takes a trip once a year with a couple of his former teammates from Notre Dame. This year, the group decided to go to Dublin, Ireland, in part to see Onwualu, was also was visiting Dublin at the time.

"It’s just an old-school town with a lot of old-vibe bars to take pictures outside of, so it was cool," Rochell said about the Dublin trip.

This is by far my favorite picture that I took from my recent trip to Dublin. I wanted to post this on my main profile because I think it's important to display things that we are truly passionate about. Instagram is often filled with things we think others will find intriguing and I sometimes lose sight of being true to myself. I can only speak for myself but I tend to think that many would agree. Why not be selfish and post stuff we care about most?

The Notre Dame product said he has done some job shadowing others, but has had no formal training in photography. Along with reading books on the subject, Rochell said he looks to photographers such as Joe Greer for inspiration.

"If you go to his profile, he's in all different countries taking pictures in the country with people doing what people do, whatever it may be," Rochell said. "That's kind of what I like -- I like getting what most people would consider candid photos, not staged, but what's going on. He does a good job of capturing those."

Along with photography and an unusual, plant-based diet for a football player, Rochell is starting a new movement called #See You on Sunday.

Y'ALL ALREADY KNOW WHAT TIME IT IS. #SeeYouOnSunday join the wave!

The purpose is for Rochell to help others ween their use of social media to more healthy levels by taking Sunday's offline to pursue other passions and hobbies, like photography.

"The reason I did that is I kind of got tired of the way I was using social media, which was excessive use," Rochell said. "I was going to delete my social media, but people around me said you shouldn't delete your social media. So I was like, all right, I'm going to try and leverage the followers I do have and my 'influence' to kind of start the conversation on healthy social media use.

"If you're in a social setting and you're stopping to look at pictures of other people, I think that's excessive. If you're at home, at night when you would read or decompress and you're looking through Instagram, I think that makes some sense. But for me, I found myself hanging out with people, and then pausing to look at pictures of other people's lives. And that doesn't make sense to me."

Rochell has multiple Instagram accounts, including one solely for his photography. 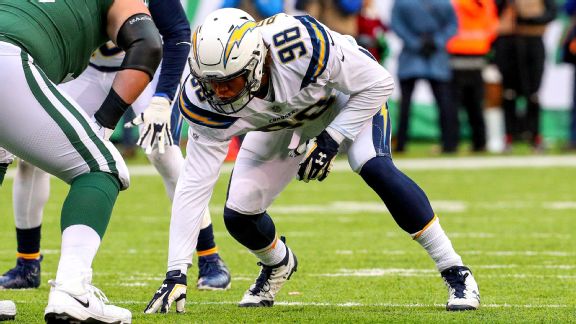 So long, pizza -- plant-based diet has Isaac Rochell ready to break out. Story

We'd be remiss if we didn't ask Rochell at least one football question. The 6-foot-4, 280-pound defensive end is coming off a productive season in which he finished with 29 tackles, five sacks and an interception playing 505 defensive snaps for the Chargers in 2018.

So what's Rochell looking to improve on for the upcoming season?

"For me, it's flexibility," he said. "It's kind of the same thing as last year. I feel like I made a big jump from my first year to my second year. And what I focused on was flexibility and functionality, just feeling good.

"I learned from guys like [Brandon] Mebane and some of the older guys that one of the biggest things and important things is just feeling good. I know I'm good. I know the people around me are good, so I know if we just feel good -- we go out there and our bodies feel like they are running like they should be -- we'll play good. So that's big for me this offseason. Just functional movements. I'm doing a lot of yoga. Getting a lot of body work to work on flexibility. And then just going into OTAs feeling good."