"That's still to be decided. But I think there's a good chance he plays Tuesday and Wednesday," Scott said at the team's practice facility in El Segundo on Sunday.

Bryant did not attend practice on Sunday after sitting out Friday's 112-95 loss to the Memphis Grizzlies at Staples Center. 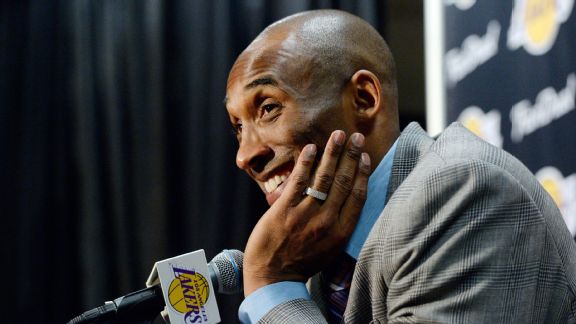 With 22 games remaining in the Lakers' season, Scott said it's been even more difficult for Bryant to sit out games lately, even though he understands the somber reality that he can't play in every game.

According to Scott, Bryant sporadically wakes up in pain, both because of his age (37 years old) and the nature of his shoulder injury.

Scott says he will discuss Bryant's availability with him on Monday, either in person -- if Bryant attends practice -- or over the phone.

"I'll probably see him tomorrow. If not, I know I'll talk to him tomorrow," Scott said. "I talked to him Friday and Saturday a little bit about the game on Friday. We had some good laughs about some other things that we were talking about. I don't expect to see him until tomorrow, and if not tomorrow, then obviously I'll definitely talk to him."