That moment spread like wildfire across social media and those three words traveled with the Lakers the very next night to Atlanta, emerging again in black marker on the whiteboard inside the visitors locker room, where the Lakers celebrated an impressive win over the Hawks.

Then Friday, after the Lakers thrashed the title-favorite Golden State Warriors 117-97 at Staples Center, that motto rang out again in the Lakers' locker room.

"There were a lot of 'I love basketball' chants," said Lakers point guard D'Angelo Russell, who scored 17 points and had four assists.

When the team closes a huddle now, it does so not with a "1-2-3 Team!" but with that phrase, Russell added. Everyone around the team is using it -- the coaching staff, players, everyone.

Such a line could only come from World Peace, who is both playful and appreciative that he's still here, in his 17th NBA season, but that line also captures the joyful spirit and fun-first mentality that new coach Luke Walton has tried to instill as the foundation of their new culture, one that he said borrows heavily from his former employer, the Warriors.

"They're in there laughing, having fun, and that's the way you should feel like when you put that much effort into something," Walton said of the team's locker room. "That's why it's so much fun at the end of the day, because it wasn't easy and guys are dead tired in there."

But for as pleased as the NBA's youngest coach and his young squad were after a surprising and spirited win, their celebration also was measured, with an eye not on now but the future.

"It obviously feels better because they're the best; they're as good as it gets," Walton said, "But as far as the developing goes, it was good to see the progress continuing."

The win improves the Lakers to .500, a winning percentage they haven't seen much in recent loss-filled seasons, and it marks the strongest sign yet that Walton and the Lakers' rich bounty of promising talent might be on a faster-than-expected path toward something special.

FRIDAY NIGHT IN THE NBA 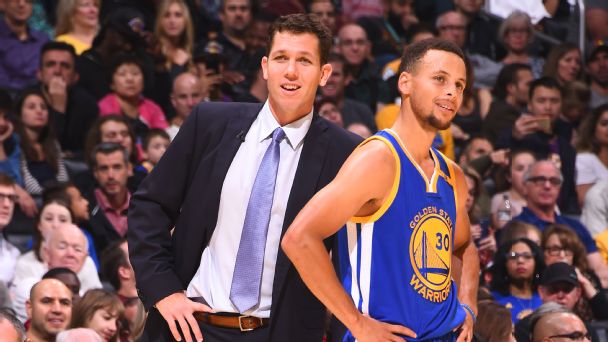 Luke Walton's young Lakers knocked off the Warriors on a night of reunions in the NBA.

• Curry can't hit 3, Lakers roll
• Lakers could be on faster track
• Rose, Noah get best of old mates
• For Rose, life is good on this night
• No answers for winless Pelicans

"This year, compared to last year, I feel like we are playing for something," said Lakers forward Julius Randle, who led the way with 20 points and 14 rebounds.

But the Lakers tempered anyone who might jump to conclusions about what the win really means.

"It's a good start for us, and it's a great win for us," Randle said. "It shows how good we can be, but we've got to continue to build on it."

Said guard Lou Williams, who scored 20 points of the bench: "They're obviously going to be one of those teams that makes a deep playoff run. "Tonight, it was just one of those particular nights where we played better."

Indeed, the Warriors were playing on the road on the second of a back-to-back set after an emotional game against the Oklahoma City Thunder the night before -- less-than-ideal circumstances that Golden State coach Steve Kerr mentioned before the game, almost foreshadowing that his team would come out with a lack of energy, which it very much did.

"It's our annual beatdown at Staples by the Lakers," Kerr said after, referencing his team's shocking loss to the Lakers here last season. "They do this every year. Let's just give them credit. They came in sky high with a ton of energy. Played really well and we were flat, right from the beginning, never even had a run the entire game. Our defense was bad, our offense had no flow.

"So pretty lousy night all around."

And arguably the greatest collection of 3-point shooters in the history of basketball missed an alarming amount of incredibly wide-open 3-pointers. All in all, the Warriors shot 5-for-32 from beyond the arc, with Klay Thompson going 2-for-10 and Stephen Curry missing all 10 of his tries from 3-point range, snapping a streak of 157 consecutive games with a made 3-pointer.

If the Lakers received some luck with all the Warriors' wide-open misses, they received a little bit on offense, too, such as when Larry Nance Jr. somehow tipped in a loose ball in the fourth quarter.

"It was crazy," Lakers guard Jordan Clarkson said of that play. "Everything was going our way."

In the final seconds, several Lakers danced and shimmied on the court, grinning from ear to ear while their fans went wild around them. After years of being stuck in the mud, they've gained traction -- that much is certain -- and many players keep offering up the same explanation.

"I think we are all starting to trust each other, and starting to understand that in order for us to win the game, we have to share the ball, and we have to give the ball to the open guy," Williams said. "We are just playing. We are having a lot of fun. And it's working out for us."

And at the center of all their newfound momentum is a simple phrase.

They love basketball, and playing it together, as a team -- and it shows.