LOS ANGELES -- Angel Fabela learned Spanish as a teenager so that she could communicate with her grandfather and has spent most of her adult life trying to connect with her Mexican heritage. This wasn’t just a football game. This wasn’t just her Los Angeles Rams playing in a potential Super Bowl preview against the Kansas City Chiefs on a national stage.

For Fabela, and so many of the Mexican-Americans spread throughout Southern California, this was a pilgrimage. She bought six tickets, three of them for friends traveling all the way from Illinois. She was going to pull her 14-year-old son out of school, visit the Pyramid of the Sun, meet up with other fans who made the journey and bask in the unique pairing of her favorite team in her home country. 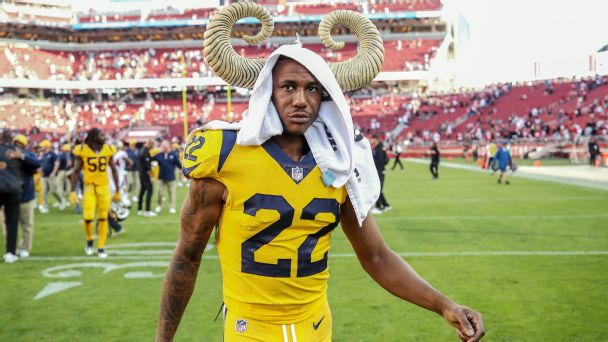 The Chiefs will face the Rams on Monday Night Football (8:15 ET on ESPN/ESPN App) in what could be a Super Bowl preview.

• Marcus Peters believes in Marcus Peters. Do the Rams?
• Mexico move leaves hurt feelings for fans
• McVay admits to stealing some Chiefs plays
• The unreal arm of Patrick Mahomes
• Jared Goff: From rookie bust to MVP
• Chiefs growing their own Hispanic fan base

On Thursday, she was elated.

By Tuesday, her spirit was broken.

Late Tuesday afternoon, the NFL announced that its anticipated Monday Night Football game (8 p.m. ET on ESPN) would be moved from Mexico City to Los Angeles because of substandard playing conditions at Estadio Azteca.

Rams players, stationed in Colorado Springs, Colorado, in order to acclimate to the high altitudes of Mexico City, expressed joy and relief on Twitter. Thousands of L.A.-based Rams fans who couldn’t make the 1,800-mile trek south did the same, elated by the reality of the first Monday Night Football game at Los Angeles Memorial Coliseum since 1985.

But there were several others, like Fabela, who spent months excited about the prospect of such a fun game in such a special place and suddenly felt empty.

Like Henry Yep, a longtime Rams photographer who lost his mom at a young age and was getting his first chance to visit the city where she grew up. Or Mario Aguilar, a corrections officer who works in San Diego, lives just south of the border and purchased 10 tickets for family and friends. Or Roman Torres, who was looking forward to enjoying Mexico with his uncle, the man who helped him fall in love with the Rams.

“I think ‘bittersweet’ is a great word,” Rams COO Kevin Demoff said of the stunning turn of events.

Demoff had just visited Estadio Azteca a couple of weeks earlier and didn’t think the game could be in jeopardy. League officials had expressed concern about it in October, in the wake of a Shakira concert and a handful of soccer games. But, as Demoff said, “they had a plan.” He stopped by with the Rams’ groundskeepers while taking part in events throughout the city and found the field to be “very safe,” even if unattractive.

But that was followed by heavy rainfall, and more events, and by Monday, after field testers from all parties took one final look, the thought of moving the game back to L.A. became a very real possibility.

Suddenly, a Rams team still reeling from a mass shooting that occurred 10 minutes away from their facility and vast, growing wildfires that had displaced upwards of 100 members of the organization scrambled to host one of the season’s biggest games in six days. Their Agoura Hills, California, ticket office remained in an evacuation zone, so employees were scattered through four different locations trying to make it all work.

The Rams are doing their best to satisfy all parties. For first responders and others affected by the recent tragedies, they’re offering “thousands of complimentary tickets.” For season-ticket members, they provided an exclusive purchasing window with tickets that are significantly cheaper than the going rate for Mexico City. For those who were planning to make the trip, they will try to arrange special access opportunities.

But the Rams can only do so much.

It’ll be up to the NFL to decide whether fans will be refunded their tickets for Estadio Azteca. Some hotel reservations won’t be; neither will most airfare. And the excitement of a life-changing trip can’t be replaced.

“Trust me, when I say that I am truly and sincerely happy that the players get to play on the safe field,” said Fabela, who made bejeweled Rams horns outfitted in the Mexican flag for the game. “I’m happy for the Rams fans in L.A. that weren’t getting to go to Mexico that they get the bonus game here in L.A. I really am. I’m just pissed because it shouldn’t have to come to this.”

Ulises Harada is a founder and podcast host for “Primero y Diez” (“First and 10”), which has become one of the most popular NFL sites in Mexico. Harada doesn’t blame the Rams, the Chiefs or the NFL for moving the game. He blames officials in charge of Estadio Azteca, where the turf, in Harada’s words, is consistently “terrible.” He can’t fathom how this snuck up on them.

But Harada felt the excitement for this game paled in comparison to the Monday Night Football contests that Mexico City hosted the past two years, even though both teams are 9-1. There simply aren’t enough Chiefs and Rams fans in his country.

Harada identifies four tiers of NFL fandom in Mexico City, which is as passionate about American football as any city in the world.

The first tier is made up of the Pittsburgh Steelers and the Dallas Cowboys, who were broadcast in Mexico during the 1970s. The second tier is the San Francisco 49ers (they love Joe Montana) and the New England Patriots (that Tom Brady guy isn’t so bad either). The third tier is composed of other teams with successful histories, like the Oakland Raiders, the Miami Dolphins, the Green Bay Packers and the Denver Broncos.

“After those teams,” Harada said, “all the fan bases are really small.”

The Rams’ recent success, infectious excitement and swelling popularity gave them a chance to gain some real traction in the second-largest city in the Western hemisphere.

With a thrilling win, they could have left Mexico City with a new market.

“This was a great opportunity to build that fan base,” said Demoff, whose team must play one more international game in 2019. “Hopefully we’ll have a chance to go back next year and play there and get all the issues resolved.”

The Rams will still do all the community events they planned in Mexico, a slate that includes hospital visits, a charitable 10K and the construction of a playground. They have spent a lot of their time trying to connect with a local Hispanic fan base that spent two decades without its own NFL team.

Two years ago, the Rams partnered with Univision to broadcast Spanish-language preseason games (the Chiefs have done something similar, with a popular Spanish-language broadcast team for all games). Two weeks ago, they partnered with Nike to outfit the two programs involved in the “East L.A. Classic,” one of the biggest high-school rivalries in the country. Throughout, they freely utilized the #VamosRams hashtag on social media platforms.

“We’re just starting to scratch the surface of that relationship,” Demoff said. “Hopefully this isn’t a setback; more of just a delay.”