He understands it so much so that the Los Angeles Rams' defensive coordinator seized the opportunity in front of a large media contingent to offer the credentials of his son, Wes Phillips, who is a tight ends coach for the Washington Redskins.

“Wes is a young offensive coach that knows Sean McVay,” Phillips said, serious as ever, “if anybody is looking for a head coach.”

The room laughed. And it seems far-fetched, yet somehow it wouldn’t be shocking if Wes Phillips’ phone began to ring.

Call it the Sean McVay Effect.

The Rams hired McVay in January 2017, when he was 30 years old, making him the youngest head coach in modern NFL history. He took a 4-12 team that had suffered a 12-year playoff drought and clinched a division title in his first season. In his second season, the Rams again won the NFC West. It was the first time since 1979 that the team had won consecutive division crowns.

“It's something that, when you get a chance to play for one game away, that's exactly why you do all this hard work,” McVay said. “We're going to go there and give it our best shot and compete to the best of our ability and see what happens.”

But regardless of Sunday’s outcome, McVay’s tenure in L.A. is already considered a resounding success and is leaving an impression around the NFL. Teams across the league are in a hurry to find the next McVay -- a coach who can offer an explosive brand of offense and be a quarterback guru. The Rams average 32.9 points per game, and under McVay, Jared Goff went from bust to boom.

The Green Bay Packers hired Matt LaFleur, a 39-year-old offensive-minded coach who spent last season as the playcaller for the Tennessee Titans and in 2017 was McVay’s offensive coordinator (although he did not call plays).

Who will make the Super Bowl? Experts make their picks

The best Sunday of the year is nearly here. Stephen A., Max, Barnwell, Riddick, Bruschi and more make picks for Rams-Saints and Patriots-Chiefs.

“Being around Sean McVay and seeing how he did it, especially with the relationship I have with Sean, gave me a really good blueprint,” LaFleur said when he was introduced to reporters in Green Bay.

The Cincinnati Bengals appear set to hire Rams quarterbacks coach Zac Taylor, another 30-something offensive coach, who has spent two seasons with McVay (including one as receivers coach) and has prior NFL experience with the Bengals and the Miami Dolphins.

And the Arizona Cardinals opted for an unconventional hire in Kliff Kingsbury, a 39-year-old who was fired after producing a losing record in six seasons at Texas Tech but -- as a (since-modified) Cardinals news release pointed out -- “is friends with Rams coach Sean McVay -- the 32-year-old offensive genius who has become the blueprint of many of the new coaching hires around the NFL.” Before Kingsbury accepted the position, McVay extended to him an invitation to join the Rams’ staff as an offensive analyst for the playoff run.

When one league executive was asked via text message whether the McVay-like hires were a trend or a coincidence, the executive responded only with a link to the famous “McDowell’s” scene from “Coming to America.”

A quick synopsis of the 1988 comedy: A character's whole business model is to make customers believe they’re headed into McDonald’s; instead, they’re going to McDowell’s -- a close, but clear, knock-off of the world-renowned fast-food chain.

Yet there’s only one McVay: a highly motivated, inspired leader who is an offensive-minded wunderkind who can also can break down a technique or play with any of his defensive players while simultaneously rebuilding the team's culture.

“He walks into a room and there’s a command that he has, and that’s something that’s not taught,” right tackle Rob Havenstein said.

It's not something that can be duplicated with just any coach who checks a few of the boxes.

But nevertheless, teams are eager to find anyone like McVay, and are especially targeting those who have recently coached with him. He’s the most recent model of a young coach who has found success when paired with a young quarterback -- Goff has been named to consecutive Pro Bowls. And McVay hasn’t shied away from mixing in some unconventional plays as a playcaller.

“Super smart, and cerebral,” said Rams running back C.J. Anderson, who has spent only a month with McVay. “Puts us in the right position with certain calls and takes ownership of things that he makes bad calls on.”

When asked about teams across the league making a clear attempt to replicate him, and his model for success, McVay said it was “certainly humbling and flattering,” but he stayed true to character and quickly deflected the praise to the organization, his staff and his players.

“It's a reflection of everybody that's been a part of this,” McVay said. 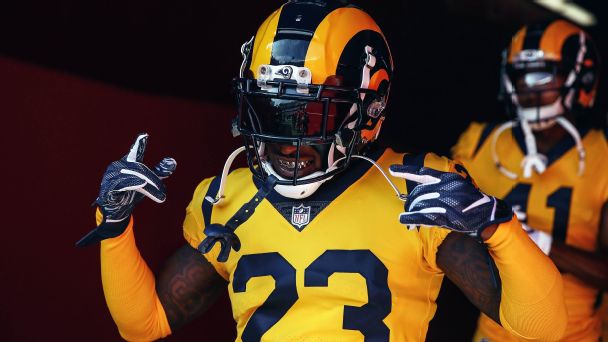 He does, to an extent, have a point.

“Wes told me all about him and all the great things about him,” Wade Phillips explained when asked what enticed him to take a job with an unproven, and young, coach. Wes and McVay spent three seasons together on Washington’s staff. “Wes had already said he thought [McVay] was going to be a great head coach. He had great command of the room, and all those things.”

McVay also kept an open mind in keeping special-teams coordinator John Fassel from the organization’s previous coaching staff and ensuring the Rams would maintain one of the top special-teams units in the league.

But the bottom line is, as much as McVay wants to credit those around him for the Rams’ quick ascension, he’s the head coach, and their success and failures start with him.

He has earned a 25-9 record in two seasons and has the Rams one win from the Super Bowl.

“I'm too young to have a coaching tree,” McVay said, with a chuckle.

Teams across the league seem to think otherwise.