At the outset of the offseason program in April, the Los Angeles Rams running back was asked if he was prepared for an offseason of questions about his left knee.

Fast forward two months, and the questions and discussions about Gurley’s knee have remained atop the news cycle.

Perhaps because answers have been difficult to come by.

“Feeling good,” Gurley said Tuesday at the team’s training facility, as he stood at a podium and responded to more questions from reporters for the first time since April.

It has been more than four months since Gurley was last seen running with a football, when the Rams’ offense stalled in a 13-3 loss to the New England Patriots in Super Bowl LIII. He did not participate in practices during the offseason program and it could be at least another six weeks until Gurley engages in football activities, when the Rams open training camp on July 27.

Variations of “feeling good” and “feeling fine” have been Gurley’s -- and the Rams’ -- go-to line when asked about his knee, which kept him sidelined the final two games of the regular season.

“Feel really good,” coach Sean McVay said, when asked how he felt about Gurley’s status looking ahead to training camp. “Talking to Todd, he feels good, looks really good and I think the plan that we set out a few months back has been followed exactly the way that we wanted it to get done.”

Neither party will confirm reports that he is suffering from arthritis or a degenerative condition.

On Tuesday, after the Rams held their one and only practice of mandatory minicamp -- in which Gurley did not participate -- the running back downplayed the significance of his issue.

“I had bigger problems to worry about coming out of college,” he said. “This is small.”

In 2014, his junior season at Georgia, Gurley suffered a torn ACL and underwent reconstructive surgery on his left knee. The injury raised concerns about his potential NFL career, but the Rams selected him anyway with the 10th overall pick after he left Georgia with a season of eligibility remaining.

The Rams’ decision to draft Gurley has paid off, to this point. But it’s that left knee -- now more than four years later -- that is cause for concern.

Even as Gurley describes his current circumstance as a small issue, and the Rams declare that all parties feel good about the situation, their actions as they prepare for a repeat Super Bowl run raise doubts.

Gurley was the only player to sit out the entire offseason program. He instead went through his own workout plan with personal trainer Travelle Gaines, while still frequenting the Rams’ practice facility.

Mort: Rams 'will take it slow' with Gurley's knee

The Rams matched the Detroit Lions’ offer sheet for restricted free agent running back Malcolm Brown -- Gurley’s trusted backup -- and a month later, they selected running back Darrell Henderson from Memphis in the third round of the NFL draft, with their second overall pick. Backups Justin Davis and John Kelly also remain on the roster.

And though McVay said that Gurley would “absolutely” participate in training camp, Gurley left some doubt as to how significant his practice load would be. “I’m not sure what I’ll be doing,” he said.

Before last season, the Rams made Gurley the highest-paid running back in NFL history when they awarded him a four-year, $60 million extension, with $45 million guaranteed.

His body of work over three seasons warranted the massive payday, keeping in mind his second season was plagued by an ineffective offense run by former coach Jeff Fisher. Otherwise, Gurley’s accomplishments are indisputable. He was named the NFL Offensive Rookie of the Year in 2015 when he rushed for 1,106 yards and 10 touchdowns. 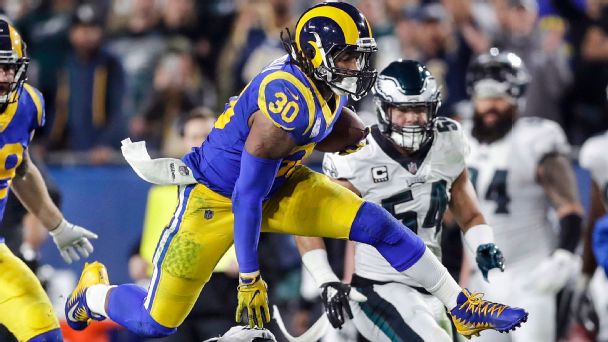 Todd Gurley was a top pick a year ago, but he has become arguably the most polarizing player in advance of 2019 fantasy football drafts. When should he be selected? Story
• Outlooks for players on new teams

When McVay arrived in 2017, he shaped his entire offense around the multifaceted back, and Gurley was named the NFL Offensive Player of the Year as he powered the Rams to their first division title in 14 seasons, rushing for 1,305 yards and 13 touchdowns and catching 64 passes for 788 yards and six touchdowns.

Last season, Gurley continued on trend as he rushed for 1,251 yards and scored a league-best 21 touchdowns in 14 regular-season games. When Gurley returned for the playoffs, he split carries with running back C.J. Anderson, and still managed to rush for 115 yards and a touchdown in a divisional-round win over the Dallas Cowboys.

But Gurley was ineffective in the two biggest games of the season. Against the New Orleans Saints in the NFC Championship Game, Gurley gained 13 total yards on five touches -- as he watched the majority of the game, inexplicably, from the sideline. In the Super Bowl, he was held to 35 yards on 10 carries.

McVay has repeatedly shouldered the blame for Gurley’s inability to find a rhythm in the playoffs. But it makes little sense that a coach who took a moribund organization and led it to consecutive division titles, an NFC championship and a Super Bowl in two seasons would suddenly forget how to utilize his best player.

Behind the scenes, the Rams have spent the offseason emphasizing the significant workload Gurley has carried throughout his four-season career, and have pointed to that as a reason his offseason load must be managed.

Since 2015, Gurley has amassed 6,430 yards from scrimmage, which ranks first among all NFL players, according to ESPN Stats & Information. He has 1,229 offensive touches over that four-year span, which also ranks first in the league and is 150 more touches than the next player, Los Angeles Chargers running back Melvin Gordon.

McVay has repeatedly steered away from any discussion about load management moving forward, and has stated multiple times that Gurley will remain a focal point of the offense.

Most recently, the third-year coach shot down the idea that Gurley has spent the offseason in recovery mode, and McVay certainly won’t entertain hypothetical scenarios that Gurley might appear less than himself going forward.

“I don’t think you can really get into any of these scenarios until we actually go play football,” McVay said. “But with what he’s said, with how he’s feeling, we feel really good about Todd Gurley continuing to be the player that he’s been over the course of his career and especially these last couple years where his production speaks for itself.”

For Gurley, the questions that raise doubt about the future of his career are nothing new.

“I’ve been hearing stuff all my life, just whatever growing up, hearing comments, whatever it is, so a lot of stuff don’t really get to me,” Gurley said.