It was late in the first half of the regular-season finale, and tight end Tyler Higbee just caught a 15-yard touchdown pass to give the Rams a commanding 17-0 lead over the San Francisco 49ers.

McVay smacked receiver Cooper Kupp's helmet, then delivered Higbee a blistering high-five before an official directed him to return to the sideline.

That's how quickly McVay and the Rams appeared to believe, perhaps for valid reason, that they were on their way to clinching the NFC West, earning the No. 2 seed in the conference and defeating their division rival for the first time in six tries.

But by the end of overtime, cornerback Jalen Ramsey sat alone on the team bench, appearing dejected as a banner lit up overhead, highlighting the Rams' newly won NFC West championship.

The problem was that they lost to the rival 49ers once again, blowing that 17-point lead to fall 27-24 in overtime as a stronghold of fans clad in red celebrated the 49ers' victory and wild-card playoff berth.

But because the Seattle Seahawks (7-10) defeated the Arizona Cardinals (11-6) minutes before, the 12-5 Rams still won the division title.

"In the moment right now, this is a tough feeling," said a frustrated McVay, whose streak of 43 wins without a loss when leading at halftime came to a jarring end. "Our guys did a good job being able to navigate through the season and still win the division. It's a good accomplishment, but I don't know that right now is a good time to celebrate that."

"Nope," said Ramsey, cutting off a question about whether a silver lining existed despite the disappointment in how the regular-season finale ended.

The Rams must regroup quickly. As the No. 4 seed, they will host the No. 5 Cardinals, with whom they split the regular-season series -- each team winning on the road -- in a wild-card game next week on Monday Night Football.

"You don't want to take for granted the difficulty of winning a division title but at the same time, a loss never feels good," said Kupp, who earned the NFL's "triple crown" as the league leader in receptions (145), receiving yards (1,947) and touchdown receptions (16). "The focus is really on getting ready for next week, being able to respond from this thing, watch the film, make the changes that we need to and be ready to respond with a great week of practice and play a very good Cardinals team."

The Green Bay Packers earned the NFC's top overall seed and a first-round bye, while the Tampa Bay Buccaneers and Dallas Cowboys took the No. 2 and No. 3 seeds, respectively, thanks to the Rams' loss. 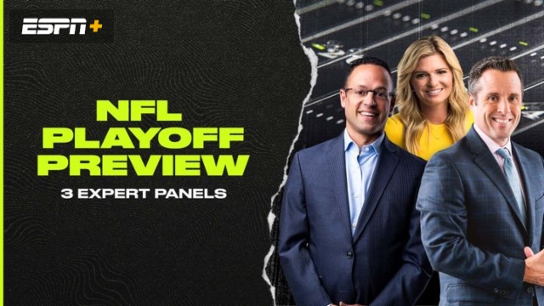 "I guess it's nice," Stafford said. "It means you get a home playoff game, but obviously would have rather won the game for sure."

Stafford led the fast start, directing a mistake-free first-half effort that included completing 15 of 16 passes for 153 yards and two touchdown passes to Higbee.

However, the offense -- which produced only 14 rushing yards in the first half -- began to stall out of the break.

The Niners closed out Sunday's win when cornerback Ambry Thomas picked off a deep pass late in overtime that was intended for Odell Beckham Jr.

"I just left it short," said Stafford, who the Rams acquired in a blockbuster offseason trade behind the notion that he would be the final piece needed to win Super Bowl LVI at their home stadium on Feb. 13.

Stafford didn't get much help from the ground game, as the Rams rushed for only 64 yards behind Sony Michel and Cam Akers, who made his season debut less than six months after suffering a torn right Achilles tendon.

Defensively, the Rams held the Niners to 83 yards in the first half and safety Taylor Rapp intercepted his fourth pass of the season. However, the 49ers offense exploded out of halftime to finish with 449 total yards, including 135 on the ground.

"I don't know," Ramsey said when asked what happened in the third quarter that allowed the 49ers to score 14 unanswered points to turn a 17-3 Rams halftime lead into a 17-17 tie. "We weren't aggressive enough, in my opinion, but we've got to watch the film to figure that out."

Ramsey finished with three tackles and an interception, which stopped a 49ers attempt at a go-ahead score midway through the fourth quarter. But the Rams, after going ahead 24-17 on a 4-yard touchdown pass from Stafford to Kupp with 2:29 left, allowed San Francisco to drive 88 yards with no timeouts to score a game-tying touchdown with 26 seconds left to force overtime.

• Inside the McCaffrey trade
• Ravens' OC job among best?
• What to do with Dak
• Should Jets be all in on Rodgers?
• What defined Mike McDaniel's first season?

"You've got to finish," McVay said. "Our guys came out ready to go, but you've got to play four quarters, or five quarters in this instance."

Despite the loss, which ended a five-game winning streak, Ramsey expressed some confidence that the Rams could move forward in the postseason.

"Fo sho," he said, when asked if they were still equipped to make a Super Bowl run. "Correct what needs to be corrected from the film and just move on. Tomorrow. Or in a little bit. I won't be mad in a little bit when I go see my daughter, but right now I'm still pretty pissed off."

"The biggest thing is we're a resilient bunch," he said. "We have been all year, whether we're playing at home, playing on the road, things are going our way, things aren't going our way, we continue to battle. That's what it takes to win games in the playoffs. There's no question."