As a math major at North Carolina, Chris Iannetta had to get through courses such as Advanced Calculus II, Functions of a Complex Variable with Applications and Elementary Differential Equations. 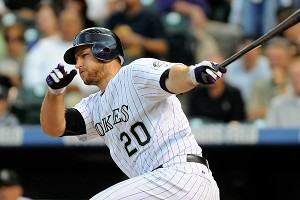 So, he ought to know the difference between .301 and .172. As a baseball player, he can’t help but know that’s the glaring divide between his batting average at hitter’s-haven Coors Field and every other stadium he played in last year.

It already has been, with some people wondering whether the Angels were getting a player whose numbers will collapse when he comes down to sea level. Iannetta points out that in 2008, his best season, he hit .280 on the road and .250 at home.

And, by the way, he has no problem with people slicing and dicing the numbers. If he weren’t busy here with a new team and trying to satisfy Mike Scioscia’s high demands for catchers, he might even join them. The Society for Baseball Research (SABR) would seem to have the perfect on-field spokesman in Iannetta.

“Any way you can analyze a game and process it and find enjoyment from baseball is fine with me,” he said.

Even if Iannetta bats just .208 this year (his lifetime average away from Coors), he’ll be an offensive upgrade over the Angels’ previous No. 1 catcher, Jeff Mathis, a .194 lifetime hitter. It goes well beyond that, though, because Iannetta is more powerful (.430 slugging percentage to .301) and more patient (.357 on-base percentage to .257) than Mathis.

Pulling off a pair of trades to get more hitting from his catchers was one of the first things new general manager Jerry Dipoto did. Now, the Angels have to find out if their pitching suffers as a consequence. Mathis is a nimble defender and, according to Scioscia, an expert pitch caller.

Iannetta’s eight passed balls were the second-most in the NL last year, but he's a better thrower than Mathis and generally viewed as a good defender.

“He’s very athletic, he’s tough and, I think, mentally he’s going to make a quick study and jump right in,” Scioscia said. “He’s eager to make a contribution and be the guy we need him to be.”

A lack of studying doesn’t figure to hold Iannetta back. He already has begun familiarizing himself with the repertoires of Angels’ pitchers. He figures all those hours studying equations and formulas in college must be good for something.