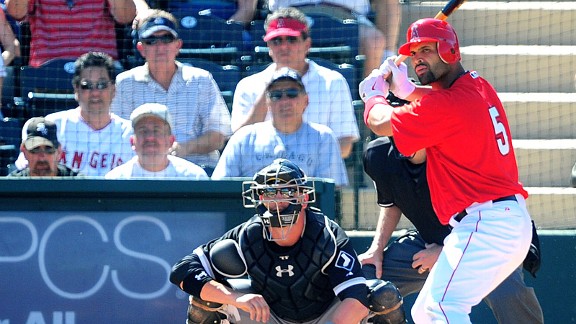 Albert Pujols might take Wednesday off after playing the first two spring games.

Through two spring training games, the Angels have shown a few trends:

Albert Pujols likes to play in spring training games. He is one of three players who played in both exhibition games so far and he has been on base four times. With the Angels just easing into baseball shape, Pujols figures to take Wednesday off. But manager Mike Scioscia didn't want to commit. "Do I have to have that in right now?" he quipped.

Kole Calhoun looks like a player who might be able to help the Angels one day. Playing just a few miles from where he played college ball at Arizona State, Calhoun had a couple of hits, including a double, and ran the bases aggressively. He signed after his senior season, which is normally not a great sign for a prospect, but he's on the Angels' radar after hitting .324 at Single-A.

"He's versatile, he's got a real nice presence in the batter's box from the left side and he can play good outfield and good first base," Scioscia said.

Jean Segura is coming on strong. The young shortstop has made two brilliant defensive plays already, including cleaning up a double play after a bad feed from Alexi Amarista.

"He was able to turn it on pure skill," Scioscia said.

The Angels' offense looks more potent and more patient in the early going. How do we know? For one thing, Vernon Wells walked in back-to-back games. That almost never happens. He walked just 20 times all of last season, including once in September. He walked twice in a game once in 2011 and had back-to-back games with a walk just once, July 8 and 10 (with a day off in between).

The Angels have walked 14 times and scored 15 runs so far.