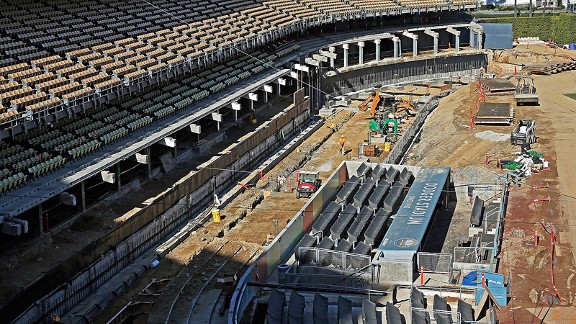 Work continues on an estimated $100 million in improvements to Dodger Stadium.

Janet Marie Smith had a bit of a conundrum when she sat down to sketch out some improvements to Dodger Stadium. Smith, who made her name overseeing work at Baltimore's Camden Yards, Boston's Fenway Park and Atlanta's Turner Field, among other places, needed to improve the fan -- and player -- experience while preserving the funky, early 1960s vibe.

"There are some things about its vintage state that aren't good," Smith said. 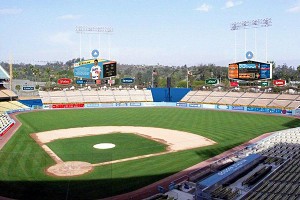 A rendering of some of the improvements planned for Dodger Stadium.

Tuesday, the Dodgers unveiled their plans for the roughly $100 million in stadium renovations under way at Chavez Ravine. Many of the improvements are subtle and some, such as the larger clubhouse and weight room, will be invisible to the public. They're all aimed at preserving the stadium's history while bringing it into the 21st century.

The Dodgers are hopeful the upgrades will lead to high-profile events such as a Major League Baseball All-Star game, which last came to Dodger Stadium in 1980 (when the hexagonal scoreboards were replaced with rectangular ones).

Dodgers president Stan Kasten said he has some upcoming meetings with Commissioner Bud Selig and he will mention the Dodgers' interest. They likely are behind Washington and Miami, at least, in the line to host a game.

"The extent that it had to be forestalled because of the facility, that will never be an excuse again," Kasten said. "This facility will be the equal or surpass any other stadium in baseball."

It will be a challenge for the Dodgers simply to complete the construction work by a March 29 exhibition game against the Angels. Kasten acknowledged the team has contingency plans in case the work isn't completed by then, but wouldn't divulge what they were. It's likely they would play any games at the Coliseum or Angel Stadium if necessary.

"I think we're going to get it done by Opening Day," Kasten said, "but the unforeseen is unforeseeable."

The playing dimensions will not be appreciably altered. If anything, it will become slightly more of a pitchers' park. Kasten estimated the renovations will produce about six more feet of foul ground, giving fielders more chances to catch foul pop-ups.